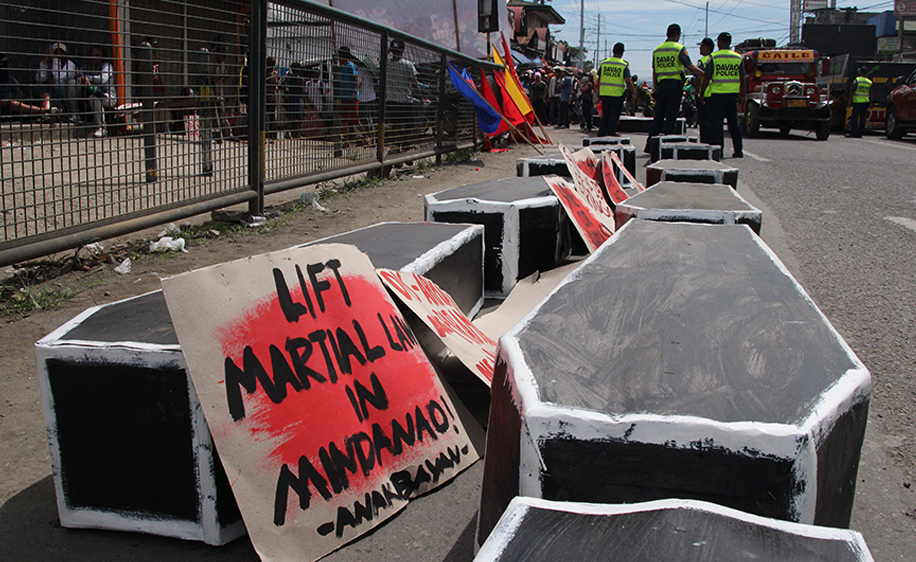 In this file photo taken on December 10, 2017, protesters trooped into the gates of the Armed Forces of the Philippines Eastern Midnanao Command in Panacan, Davao City. They laid cardboard coffins to symbolize the effects of the continued militarization in Lumad and peasant communities. (Keneth Paul Senarillos/davaotoday.com)

DAVAO CITY, Philippines — One year after the Proclamation 216 was signed declaring the suspension of habeas corpus and the implementation of Martial Law in Mindanao, human rights group rounded up numerous cases of abuses.

Ryan Amper, spokesperson of Barug Katungod Mindanao, said Mindanao is “soaked in blood with an entire spectrum of violations against individuals, organizations, and communities.”

His group declared a total of 130 documented cases of extrajudicial killings of mostly peasants and indigenous peoples were recorded since the declaration of Martial Law in Mindanao.

Amper said, “almost half a million of the indigenous people are being forced to leave their communities and are not allowed to go back to rebuild their lives.”

In their monitoring, Barug Katungod Mindanao noted that 404 individuals were charged with trumped-up cases in different courts.

Most of those charged were leaders, community organizers and human rights workers who were forced to face false charges or to go into hiding to secure their lives and their families.

For its part, Karapatan reported that they have documented a total of 661 victims of forced or fake surrenders.

In Lupiagan and Licoan, Sumilao town, Bukidnon, around 500 residents were gathered by soldiers of the 1st Special Forces Battalion in its military camp in Barangay Mampayad, Manolo Fortich town.

The residents expected to receive rice and 500 pesos in cash but were dismayed when, upon their arrival at the detachment, they were asked to sign an attendance sheet and their pictures were taken.

Days later, a local radio station carried the news from a military report which tagged them as surrenderees of the New People’s Army (NPA).

In Barangay Manggayon, Compostela town, 18 members of the Compostela Farmers Association (CFA) were “forced” to surrender on February 28 by the elements of the 66th Infantry Battalion of the Philippine Army.

They were threatened with the cancellation of their Pantawid Pamilya Pilipino Program (4Ps), a cash aid from the Department of the Social Welfare and Development if they won’t sign the surrender document.

Another documented case occurred in March 5 were 15 members of the Tribal Indigenous Oppressed Group Association (TINDOGA) “were called to attend a meeting attended by six military personnel under 8th Infantry Battalion and 22 unnamed members of the Citizen Armed Force Geographical Unit (CAFGU).”

They were invited “to surrender” and would be trained as new paramilitary members.

The Sandugo, an alliance of Moro and Indigenous Peoples, also reported that one to two Lumad schools are being attacked every day for about almost two years since Pres. Rodrigo Duterte came to power in June 30, 2016.

It said that 535 cases of attacks were reported, ranging from the military encampment in schools, torture, threat and harassment, denial of humanitarian aid, illegal arrests, red-tagging, false/forcible surrenders, destruction and forcible closure.

Their data shows 385 or 72 percent of the total documented cases of attacks on schools happened when Martial Law was imposed in Mindanao.

About 7,766 indigenous students and 451 volunteer teachers were threatened, harassed and intimidated by the AFP, paramilitaries and local government units.

Also, 4,050 number of mostly Lumad students were affected by indiscriminate firing carried out by AFP, CAFGU units, and paramilitary groups, the group said.

Amid the rampant rights abuses, Amper said, “There’s no point in prolonging the Martial Law implementation in Mindanao especially that it is not really to counter extremism anymore but to kill innocent civilians and attack communities.” (davaotoday.com)