3 farmer-activists killed in Compostela in one day 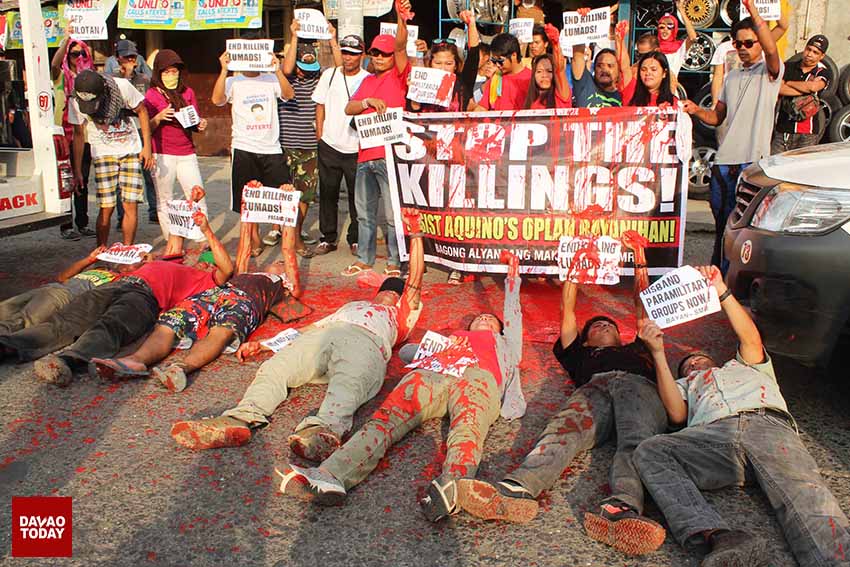 In this file photo, activist groups with Lumad leaders splash red paint unto themselves to show anger on the “continuing unresolved extrajudicial killings” in Mindanao during the visit of President Benigno Aquino III in Davao City in September 2015.  (davaotoday.com file photo)

DAVAO CITY, Philippines — Three farmer activists, including a couple, were killed in Compostela Valley, barely a week before the fourth round of peace talks between communists and the Philippine government.

Lina, 45, was shot by an unidentified assailant in Barangay Kibaguio, Laak town in Compostela Valley at 3:00 pm Monday, March 27.

“The victim was rushed to a nearby hospital, but was declared dead on arrival. She sustained four gunshot wounds,” Apiag said.

“Lina had been receiving threats from the military and was summoned many times by the military to visit their battalion camp. She has also been tagged as a sympathizer of the New People’s Army,” he added.

Meanwhile, Arman and Arlyn Almonicar couple were killed around 7:00 p.m. on the same day. They were residents of Purok 2, Barangay Bollukan in Laak town.

Apiag told Davao Today in a telephone interview that the couple ran a small business in Laak and were known to support the farmers’ cause.

“They lend their vehicle to farmers who will attend forums or mobilizations, just like in January during a peace forum in Laak, Compostela Valley,” Apiag said.

The forum last January 10 was organized by the National Democratic Front of the Philippines and the New People’s Army.

Karapatan pointed to the members of the intelligence unit of the 60th Infantry Battalion based in Laak as the perpetrators of the crime.

The Almonicar was the second couple killed in Compostela Valley this year.

On March 2, Ramon and Leonila Pesadilla were killed last March 2 inside their house in Barangay Osmeña in Compostela town, Compostela Valley Province.

The couple were members of the Compostela Farmers Association, a local group which also reported that they are being tagged as a rebel organization by the military.

The military denied the accusations.

Second lieutenant Amadeus Celestial, civil military operation officer of the 60th Infantry Battalion said “definitely wala tayong involvement dyan. Intact ang tropa natin at hindi naman natin gawain yan (Definitely we do not have any involvement on the case. Our troops are intact and we do not engage in those activities),” Celestial told Davao Today.

He added that apart from gathering information, the work of the members of their intelligence unit is facilitating rebels who want to surrender, “particularly those who have concerns on their safety.”

Lito Lao, chairperson of UMA-SMR said if the killings continue, then “this government is far worse than the  past Aquino regime.”

A total of 15 farmers and activists were killed in Southern Mindanao under the Duterte administration. Lao said “most were perpetrated by suspected military operatives.” (davaotoday.com)