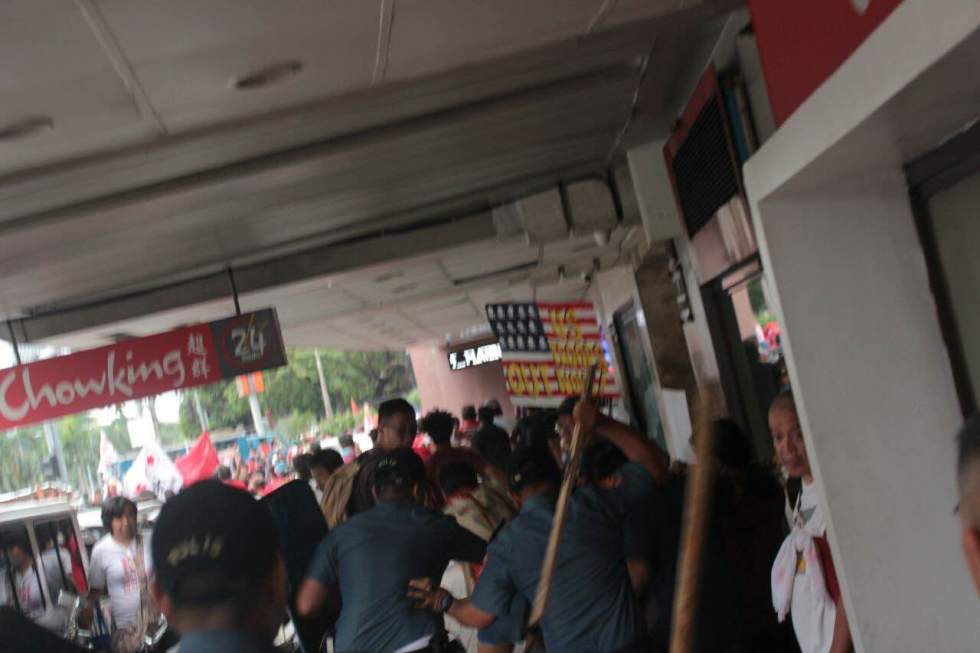 Police runs after protesters retreating towards T.M. Kalaw street after a rally in front of the US Embassy in Manila Wednesday morning. (Paulo C. Rizal/davaotoday.com)

Correction: The police arrested 24 protesters during the dispersal of the rally on Oct. 19. Two of those arrested were able to escape. The police released 24 individuals on Wednesday afternoon.

MANILA, Philippines (Updated as of Oct. 20, 5:55 pm)— Over 50 protesters were hurt and 26 were nabbed following a violent dispersal during a rally at the U.S Embassy here Wednesday morning.

Close to a thousand Moro and Lumad activists under the national minority alliance of  Sandugo led the protest rally.

The group said the protest was about to culminate when Col. Marcelino Pedroso of the Manila Police District allegedly signaled the dispersal.

“Immediately, the police released tear gas and rammed their mobile patrol vehicle through the ranks of the protesters. Police armed with truncheons also chased after the protesters from Roxas Boulevard to Kalaw Street,” the group said.

Dr. Julie Caguiat, executive director of Community Medicine Foundation with four other medics who are members of Health Alliance for Democracy and Council for Health and Development were arrested by the police.

A Moro protester, identified only as “Mangulamas,”  21, from Tamontaka in Cotabato City was also reportedly nabbed by the police.

“This protest serves to highlight the imperialist plunder, abuses, and continued domination of the United States in the country. Today, we witness how even our local security forces are keen on employing violent tactics to quell the dissent of the marginalized and the oppressed,” Jerome Succor Aba, national spokesperson of Suara Bangsamoro, said.

Dulphing Ogan, secretary-general of Kalumaran, said the attacks in their communities “are far worse.”

“Here in Manila, our calls are met with water cannons, and now tear gas and brute force. In our ancestral communities, the attacks are far worse: we all know of the repeated cases of murders against our kin. Everywhere we turn, we Lumads and other national minorities are brutalized,” Ogan said.

For Kabataan Partylist Rep. Sara Elago, the incident shows “how powerful the U.S. remains, even in domestic affairs, so as to be able to order the local police force to attack Filipinos just to defend their embassy.”

Elago, who was one of injured protesters, urged President Rodrigo Duterte to address the issue.

“We call on President Rodrigo Duterte, even if he is in China at the moment, to immediately address this issue and rein in his state forces. How can a president who is adamant against US intervention in the country accept that while he’s abroad, his own men are violently attacking his people, which he vowed to protect,” she said.

Duterte is on official visit to Beijing for a bilateral meeting with Chinese President Xi Jinping. The president is expected to depart Beijing for Davao City noontime Friday.