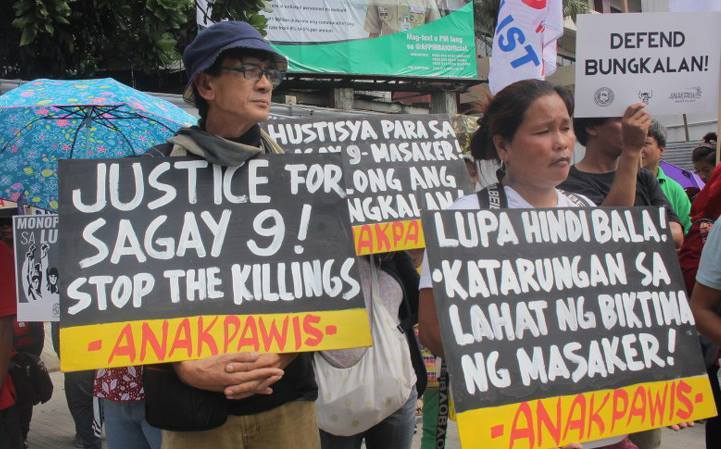 MANILA , Philippines – A national fact-finding mission on the massacre of nine farmers in Negros Occidental said suspected government agents are behind the bloodbath last October 20 even as the Philippine National Police insists so-called recruiters of the victims are the suspected perpetrators.

The mission said the likely killers are active members of the Special Civilian Auxiliary Army (SCAA) who are “commonly known” to be engaged in protecting haciendas and are under the control of the local government of Sagay City.

Based on the way the victims were brutalized after being killed and their history of killings and harassments, it is likely SCAA gunmen, numbering 10 to 15, killed the farmers, the mission said.

The group also cited earlier red-baiting statements issued by the Armed Forces of the Philippines (AFP) leading to the massacre.

Hours before the massacre, the victims started a land cultivation activity to plant vegetables to tide them over in between sugarcane cropping activities.

The Philippine National Police, however, insisted on its story that the victims were killed as part of a plot to destabilize and oust the Rodrigo Duterte government.

Bulalacao said Saturday that Manlangit and Arquillo deceived the victims by enticing them to join the land cultivation activity in exchange for a parcel of land once Hacienda Nene is distributed to farmers through land reform.

“[They were] persuading innocent people by promising them land not knowing that they become part of a greater force that would generate outrage to the government,” Bulalacao claimed.

The police general said their “complainant-witnesses” voluntarily submitted their respective affidavits, including the statement of the minor as witnessed by the Sagay development and social welfare office.

Upon learning that the boy was about to be arrested by local police, however, his mother Flordeliza Cabahug and mission members claimed custody of the boy.

Red-baiting and killings before the massacre

The fact-finding mission cited that in April, the Armed Forces of the Philippines has accused the NFSW as a legal front of the Communist Party of the Philippines (CPP) and New People’s Army (NPA) and that their land cultivation activities are projects to fund NPA operations.

In February 22, NFSW member Ronald Manlanat was shot in the head in Hacienda Joefred, also in Sagay.

The gunmen also shot some Hacienda Nene massacre victims on the head and burned three of them after being killed.

“Most of the haciendas that he’s directly involved in are the ones with land disputes, even those already under so-called preliminary activities of Department of Agrarian Reform [prior to being awarded to farmer-beneficiaries],” the mission said.

The Marañons are known to be actively recruiting former Revolutionary Proletarian Army gunmen to be part of the SCAA, the mission cited.

“In fact, the local housing project in Barangay Bulanon is allotted for SCAA members,” the mission said.(Reposted by davaotoday.com)