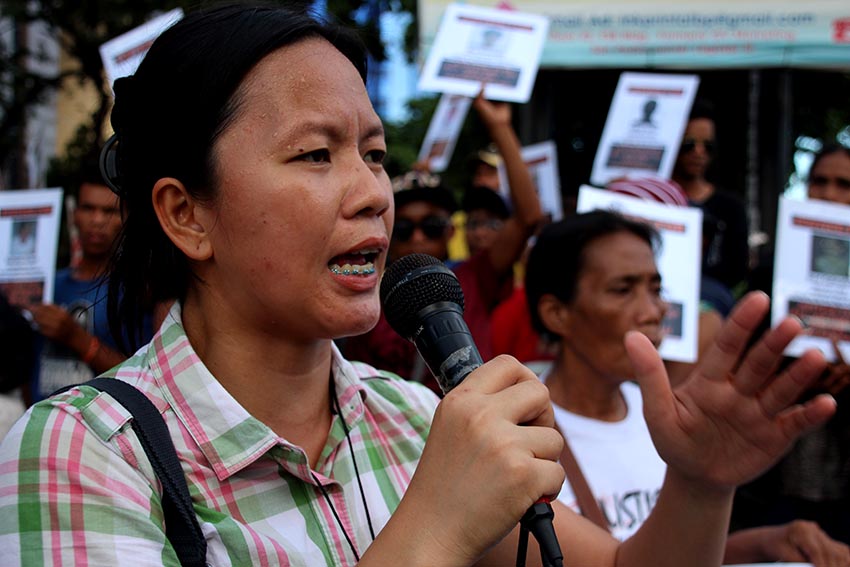 DAVAO CITY, Philippines — Rutchiel Saypan, 26, joined other families of farmer-activists in a protest on Thursday to call for justice for her cousin, Jimmy Saypan .

Jimmy Saypan is the secretary general of the Compostela Farmers Association who was gunned down on October 10, 2016 by still unidentified gun men aboard motorcycles in Montevista, Compostela Valley Province.

With the death of Jimmy, Rutchiel joined Hustisya (Justice), a group of families of activists believed to be victims of political  killings.

On Thursday, along the sidelines of a picket rally organized by the group, Rutchiel told Davao Today that Jimmy was a good person.

“Maayo gyud siya nga tao, maayo sa pamilya. Maamumahon kaayo siya. Ug usa gyud siya sa mga tinuod nga nakigbisog para babagan ang mga dagkong kapitalista nga makasulod sa amoa, sama sa Agpet (He was a really good person and a good family man. He was caring. And he was one of those who truly struggled to prevent big capitalists from encroaching in our place, such as the Agpet [Agusan Petroleum]),” she said.

Before his death, Jimmy was tagged as a member of the New People’s Army.

Rutchiel called on President Rodrigo Duterte to support them in their pursuit of justice.

Saypan was one the 24 victims of politically motivated killings, according to Human Rights group Karapatan.

The latest victim was Bernardo Calan Ripdos, 66, who was shot dead by unidentified gunmen on April 8 in his house at Barangay Sangab, Maco, Compostela Valley.

In an interview, Sheena Duazo of Bagong Alyansang Makabayan hit the army for “perpetrating” these killings.

([This rally] is in condemnation of the 24 political killings in Southern Mindanao Region. The series of killings is the result of the intensifying struggle of the people, especially in the countryside for land, food, and justice), Duazo said.

“Instead of addressing the needs of the people, especially the farmers, the state responded with harassment, surveillance, and violence led by the Armed Forces of the Philippines,” Duazo added.

“They should go beyond mere propaganda. We do not tolerate misfits in our organization,” Batchar added. (davaotoday.com)