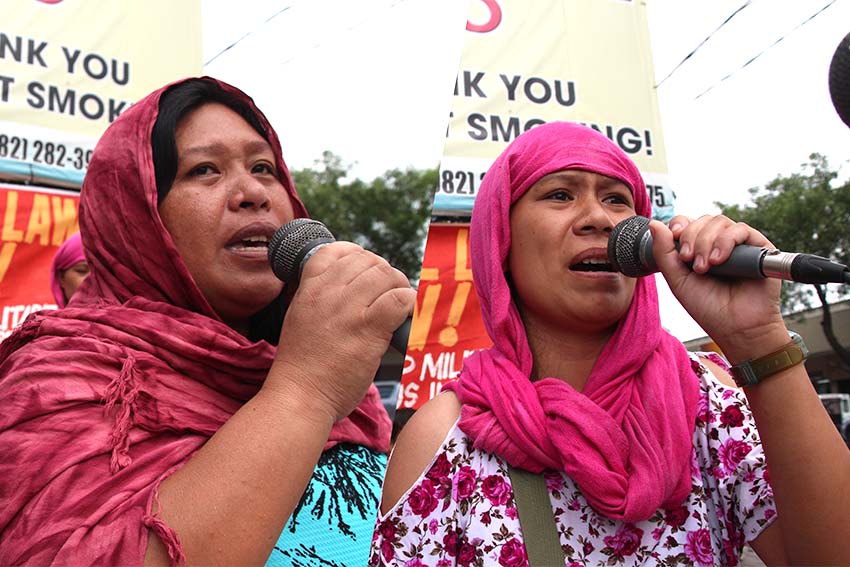 WEEPING WIVES. Siblings Racquel Quintano and Ronalyn Rabe appeal to President Rodrigo Duterte to lift the declaration of Martal Law and the suspension of Habeas Corpus after their husbands were allegedly taken by members of the 66th Infantry Battalion, accusing them of being members of the New People’s Army early morning of May 27. Quintano and Rabe, both from Maragusan, Compostela Valley, joined the mass mobilization organized by the Bagong Alyansang Makabayan Southern Mindanao Region on Monday, May 29 in Davao City. (Paulo C. Rizal/davaotody.com)

DAVAO CITY, Philippines — Two wives appealed to President Rodrigo Duterte to lift the Martial Law and the suspension of the writ of habeas corpus, after their husbands were suspected of being rebels and were forcibly taken by members of the Army’s 66th Infantry Battalion.

Racquel Quintano, 41, and Ronalyn Rabe, 30, told Davao Today that soldiers barged in their homes at the break of dawn on May 27. The soldiers beat their husbands to submission and arrested them for allegedly being members of the New People’s Army.

Quintano and Rabe denied the accusations. Both said they only joined legal mass mobilizations organized by the Unyon ng Manggugulay na Nakigbisog.

Quintano said her husband, Nestor was a farmer. Rabe’s husband, Remon was a small scale miner.

Quintano said the soldiers also ransacked their small sari-sari store and stole all their goods and money. She said they lost more or less P 10,000 that day.

Furthermore, she said the soldiers searched around their house for bombs. She said the military never found anything, but planted the evidence on his husband.

Quintano said a neighbor witnessed that the soldiers never found a bomb and gave up after a short time of digging.

However, when they arrived at the barracks, the soldiers had already presented the grenade allegedly found inside the Quijano residence.

(Where would we get that when we are only farmers? If we did possess a grenade, why would we hide it in our very house only to be arrested?), she said.

Like Quintano, Rabe said she saw the soldiers kick Remon to the ground, stepped on his face, and tied him up “like a dog.” Rabe said their young daughter was sitting on his father’s lap when the soldiers came.

(They take advantage of civilians. They do not listen to reason anymore), she said.

Quintano said they asked help from their neighbors, but nobody came for fear of also being arrested.

(My husband really begged for mercy. Our cries echoed through the community because it was very early in the morning. We asked for help, but nobody came because our neighbors were also frightened), she said.

Quintano said the soldiers told them all their rights were suspended because of Martial Law.

(They said the writ of habeas corpus was suspended. They said we couldn’t press charges, that no one could help us because it’s Martial Law. That’s why all we could do was cry, and beg for their mercy, but they never did), she said.

Quintano and Rabe called on Duterte to lift Martial Law, saying that it only empowered soldiers to terrorize civilians.

The 66th Infantry Battalion of the Philippine Army has yet to reply to Davao Today’s request for comments as of press time.(davaotoday.com)