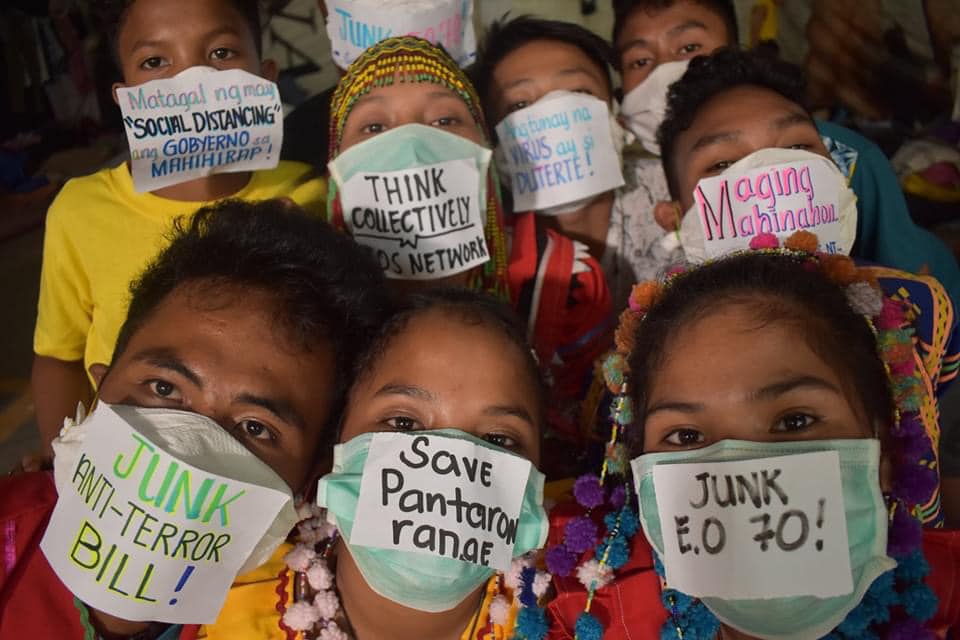 DAVAO CITY, Philippines – A Lumad student in a Bakwit School in UP Diliman had this response to the recent pronouncement of the Philippine National Police Region 7 that their schools are “training grounds for child warriors.”

“We are not being used. We are not hiding anything. We invite those accusing us like the military, DepEd (Department of Education), DSWD (Department of Social Welfare and Development), go to our school and sit down in our class,” said Chricelyn Empong, one of the Lumad students in a Bakwit School in Manila.

Chricelyn and other members of the Bakwit School held a press conference on Tuesday in UP Diliman to defend 22 Lumad students, two volunteer teachers and two tribal elders who were “rescued” by armed police officers and DSWD personnel in the Bakwit School in University of San Carlos Talamban campus in Cebu. Seven of them were later charged with kidnapping.

The government’s narrative claims these Lumad schools in various provinces in Mindanao are recruitment and training grounds for New People’s Army members. This has been amplified by the National Task Force to End Local Communist Armed Conflict.

The red-tagging has forced the shutdown of 178 Lumad schools and disenfranchised 5,500 Lumad students, according to Rius Valle, spokesperson of the children’s rights network, Save Our Schools (SOS). Not all of the displaced students had been absorbed into public schools as DepEd claimed.

Volunteer teacher Rose Hayahay from SOS added that the military’s vilification against Lumad schools for the past six years have included filing of charges on more than 30 teachers of kidnapping, human trafficking, illegal detention, while others had been harassed by soldiers and paramilitary who previously encamped in their schools.

The harassment and closure of schools have forced Lumad students to seek protection, and the Save Our Schools Network have designed the Bakwit schools in 2018 hosted by church groups and academic institutions in Davao, Metro Manila and Cebu. Valle explained that they named it so because “bakwit” means evacuate.

“It is community-led which is supported by the SOS Network. ’Bakwit’ school must continue in different parts of the Philippines for the Lumad to assert their rights to education, ancestral lands, and self-determination as the attacks against schools and children worsen,” Valle said.

Empong added that they had consent from parents to travel to these Bakwit Schools to escape from harassment and to focus on their studies. Tribal elders are also present in every Bakwit School.

The Society of Divine Word Congregation, which administers USC and the Talamban Retreat House that hosted the Bakwit school that was raided, explained that helping the Lumad is part of their mission.

Fr. Rogelio Bag-ao, SVD, the provincial superior of SVD Philippines Southern Province, said they sustained their support to the Bakwit School that housed 42 Lumad students even during the lockdown.

“One reason why the Bakwit School was delayed in going home was because of lockdown. We even had discussions with DepEd on how best to allow the Lumad to continue their education despite the lockdown. We found ways, with the help of SOS, to distribute modules provided by DepEd themselves,” Bag-ao said.

Quarantine restrictions and travel requirements, including the COVID-19 swab tests were pointed out by the provincial superior as reasons for the delay in their return to Mindanao. He said there were already four batches of students and teachers that had returned before the raid happened.

The SOS demanded the release of the 26 Bakwit School members which included minors and the dropping of all charges against the seven members. (davaotoday.com)