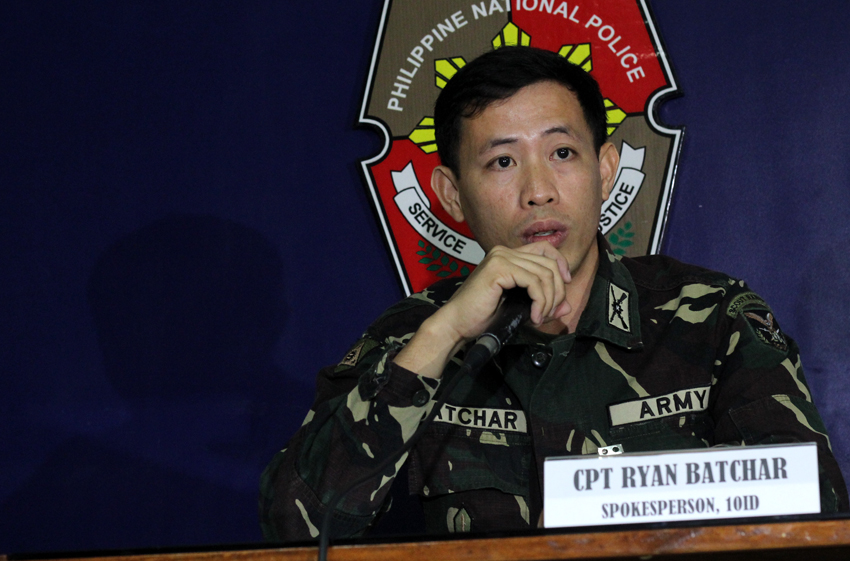 DAVAO CITY — Five soldiers were reportedly hurt and a guerrilla fighter was killed in separate clashes between the Armed Forces of the Philippines and the New People’s Army in Compostela Valley Province on Saturday, March 5.

This, as the NPA in Southern Mindanao said that since January this year, they engaged the Army, Philippine National Police and paramilitary troops “39 times”.

The Army’s 10th Infantry Division on Saturday said five soldiers were hurt after the NPAs exploded an improvised bomb in Mabini town around 12:45 midnight Saturday.

The soldiers of the 46th Infantry Battalion were hit along Sitios Logdeck and Candinuyan, Barangay Golden Valley of Mabini.

The Army said four of the five injured soldiers were brought to Davao Regional Hospital, while the other one was evacuated to Camp Panacan Station Hospital.

Captain Rhyan Batchar, spokesperson of the Army said they are still withholding the soldiers’  identities while the families are being contacted.

“Forty four of them were killed in action, including an Army Lieutenant and a sergeant. This, despite the enemy’s deployment of, and sustained and vicious military operations in the whole region by at least 13 regular Army battalions, three Division Reconnaissance companies, and a number of Scout Ranger companies and paramilitary formations,” said Sanchez.

He said the 39 tactical offensives in a period of eight weeks in the “most militarized region” in the country, “showcased the defeat of Oplan Bayanihan”.

Meanwhile, Batchar said an NPA was killed and a CAFGU Active Auxiliary (CAA) was hurt after the combined elements of 60th Infantry Battalion and CAAs of Delta Company, 72nd Infantry Battalion engaged in an armed encounter the NPAs in Laak, Compostela Valley Province around 7:00 Saturday, March 5.

The Army official said the wounded CAA was immediately brought to Metro Davao Medical Research Center (MDRMC) while the dead body of the unidentified NPA is at Camp Panacan after being airlifted from the encounter site. (davaotoday.com)