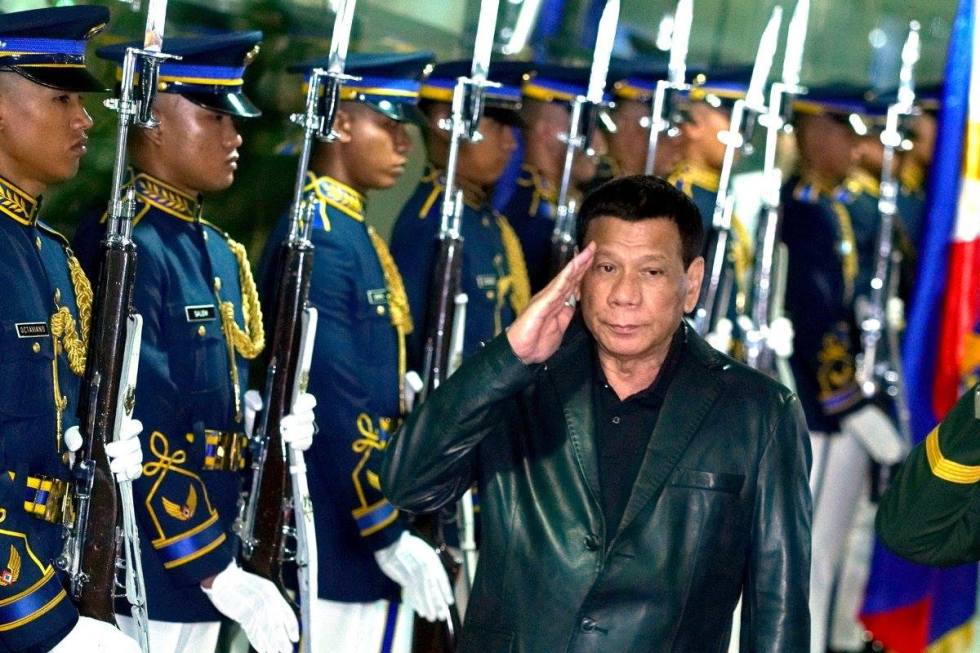 President Rodrigo Duterte salutes as he walks past the foyer guards prior to his departure at the Ninoy Aquino International Airport for his three-day official visit to the Republic of Korea on early Sunday morning, June 3, 2018. (Malacañang photo)

Duterte made the statement upon his arrival in Manila from a three-day state visit in South Korea.

“And I thank God that binigyan ako ng panahon na magsilbi sa bayan ko so that there will be changes in the coming days including public order and security,” the President warned, adding that too many crimes have been taking place in the country.

Duterte also told the public that there is no difference between martial law and a declaration of national emergency and went on to warn all Filipinos, including the human rights advocates to “behave or we will have a serious problem again.”

Aside from the killings, Duterte also cited cases of kidnappings as reasons that investors are afraid to come to the Philippines and warned that he will utilize to the hilt emergency power to put things in order.

“Ni warning ko lang kayong mga criminal, lahat na. Nasa gobyerno, sa labas. I will make radical changes in the days to come. For those offices na hindi talaga ma-control, I will place you under the Office of the President,” Duterte’s warning continued.

But for Anakpawis party-list representative Ariel Casilao, the big part of crimes, particularly the killings were perpetrated by the state forces, citing the case of the murder and killing of a Korean national where top police officials themselves were involved.

Extra-judicial killings of political activists and ordinary people who were gunned down in the continuing war on drugs are perpetrated by the Duterte government, Casilao pointed out.

The Anakpawis solon also referred to the declaration of a national emergency following the deadly bombing in Davao City in September 2016 but failed to prevent the siege of Marawi City by IS militants the following year.

Increase in the number of criminalities in the country occur “because we have a criminal government which is led by someone who is habituated to killing as a solution to social problems; someone who tolerates if not approves the crimes and corruption of his friends and officials,” Casilao averred.

“All this talk about using emergency powers to fight criminality and corruption is hypocritical and bespoke of a government which has the propensity to use extraordinary powers to monopolize criminality,” he added.

In a deeper analysis, Casilao said Duterte’s threat is part of an attempt to declare martial law on a nationwide scale in the guise of a state of emergency.

The heat of social unrest is also its toll on Duterte now due to his anti-people policies, to include the Tax Reform for Acceleration and Inclusion (TRAIN) law that triggered high inflations in the past months, he added.

“Just like the implementation of the regressive tax scheme, the declaration of a state of emergency will not spare anyone among the ordinary people, even Duterte supporters,” the Makabayan solon asserted.

He also urged the public to oppose any attempt of the Duterte government to make itself the judge, jury and the executioner.

With the unabated cases of human rights violations perpetrated by armed state agents on the masses of peasants, workers, urban poor, and indigenous people and among the rights defenders, allowing his power trip will further worsen the human rights situation in the country. This must be opposed, exposed, and rejected,” Casilao concluded. (davaotoday.com)