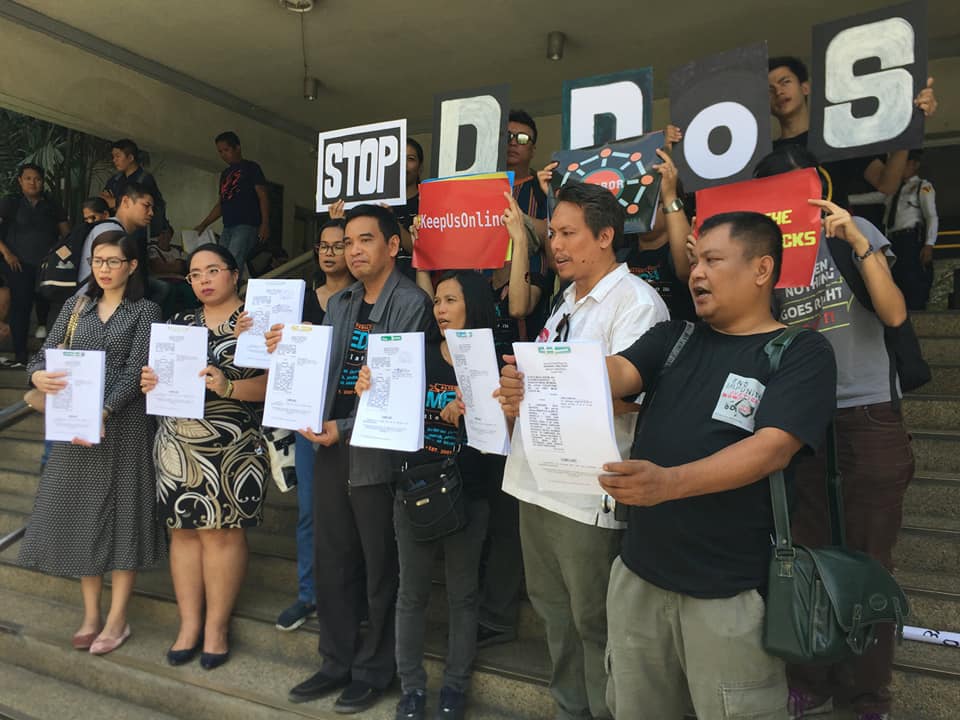 DAVAO CITY, Philippines – Alternative media groups formally filed a civil complaint against two companies identified to be allegedly behind the series of cyber-attacks against their websites since last year.

The group was assisted by the members of the National Union of People’s Lawyers (NUPL).

Since December last year, alternative media outfits have been fending off a series of Distributed Denial of Service (DDoS) attacks that made their websites inaccessible.

DDoS attack is a malicious form of cyber-attack aimed to make the server of a website flooded with overwhelming traffic from several sources.

“What happens in a DDoS attack is that the perpetrators would use several computers to access a website. They would install programs or commands in the several computers to be used so that the contents of the website would be accessed several times. If the commands for these computers get repeated several times by the perpetrators, the website could become slower to access or would be shut down altogether for other real online users.,” the group said in the complaint.

Alternative media outfits like Bulatlat and Altermidya reached out to Sweden-based Qurium Media Foundation, a non-profit organization, to provide secure hosting to their websites.

Quirium also assisted in examining the DDoS-attacks to the alternative media websites, and their investigation led to the discovery of IP Coverage and Suniway as the sources of the attacks.

On one case, the attackers “made the mistake” of exposing two of its real IP addresses after visiting Bulatlat.com without turning on their hidden IPs.

Quirium was also able to track the IP address of one of the attackers after it used his mobile phone to check the target websites.

Experts also noted that the two real IP addresses were seen in the logs of the attacked websites before and after Bulatlat.com and Altermidya.net transferred to Quirium’s infrastructure.

The complainants said that the magnitude and scope suggest that these cyber-attacks are targeted, deliberated, and organized, believed to be well-funded and orchestrated.

“This is definitely a first and it will serve as a testament that we will neither be cowed nor will we allow these cyber-attacks to continue,” Rhea Padilla, AlterMidya – People’s Media Network national coordinator, said.

The alternative media outfits maintained that these relentless cyber-attacks are politically-motivated. They also called on the two companies to reveal their real clients or persons “who performed, induced or orchestrated” these attacks.

“Launching a cyber-attack with this kind of magnitude and immensity is impossible without the knowledge of the companies. At the very least, they should be held responsible for gross inexcusable negligence. The attacks are continuing despite the fact that it has been reported in the media,” Padilla said

“We believe these attacks are state-sponsored and are part of the Duterte administration’s attempt to stifle press freedom in the country. It seems cybercensorship is one of the administration’s tactics to make way for an open dictatorial rule,” Padilla added.

The National Union of Journalists of the Philippines (NUJP) expressed support to its affiliates in alternative media in the filing of a civil case against the groups behind the cyber-attacks.

NUJP, in a statement, said the civil action sends a clear message to those who seek to silence the independent Philippine media.