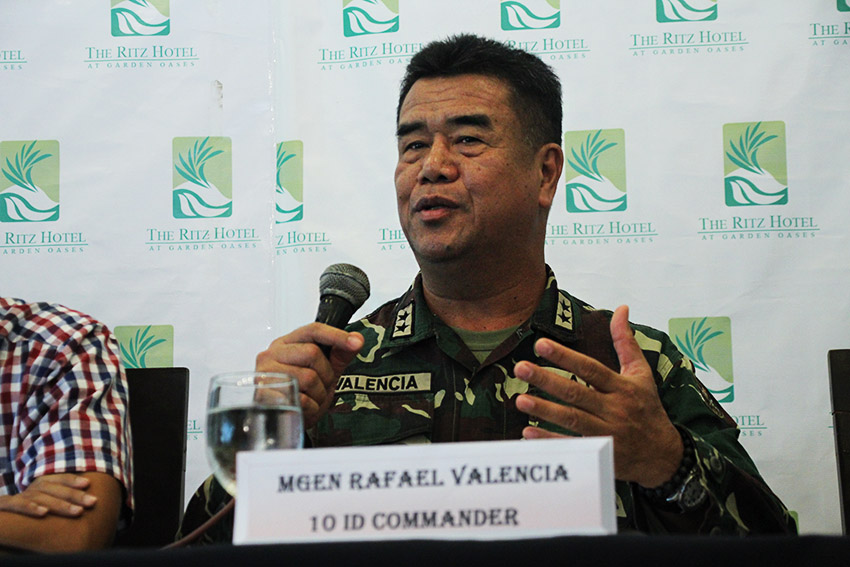 DAVAO CITY, Philippines — The Army claims it will pursue its peace and development program in different communities while there is a unilateral ceasefire declared by both the government and the National Democratic Front of the Philippines.

Eastern Mindanao Command public information officer Major Ezra Balagtey said that since there are no records of any New People’s Army (NPA) activities, the 10th Infantry Division will continue with its peace and development outreach program.

“This is in support of the peace process now facilitated by the current administration,” he said.

Army commander Maj. Gen. Rafael Valencia of the 10th Infantry Division also said that after the unilateral ceasefire declaration, they are now engaging in different communities to mobilize support for the peace talks of the Communist Party of the Philippines (CPP)- New People’s Army (NPA) here.

“Some of our troops are now focused on the peace and development outreach program in different communities and try to address the different political and economic agenda and security issues on the root causes of the insurgency,” he said.

Valencia said that they also urged the non-governmental organization “to really help the moving forward of the peace talks.”

Aside from peace development program, Valencia said that 10th ID is now “actively supporting” the Philippine National Police (PNP) and other law enforcers in the anti-drugs and criminal operations.”

“As a matter of fact, we conducted a series of checkpoints especially in our area and arrested some drug pushers,” he said.

Valencia said that the 10th ID arrested 62 suspected drug pushers and users, confiscated 162 sachet of shabu and 60 packs of marijuana in their area.

“We already identified some areas in the camp for the rehabilitation center if it will be pursued,” he said.

As for the rehabilitation center, Valencia said that they have not yet prepared the rehabilitation centers, but confirmed that President Rodrigo Duterte will use the 100-hectare Camp Manuel T. Yan in Mawab, Compostela Valley of 10th ID and Camp Hermigido Agaab Jr., in Pulatana Malandag, Malungon, Saranggani of 1002nd Infantry Brigade (IB). (davaotoday.com)