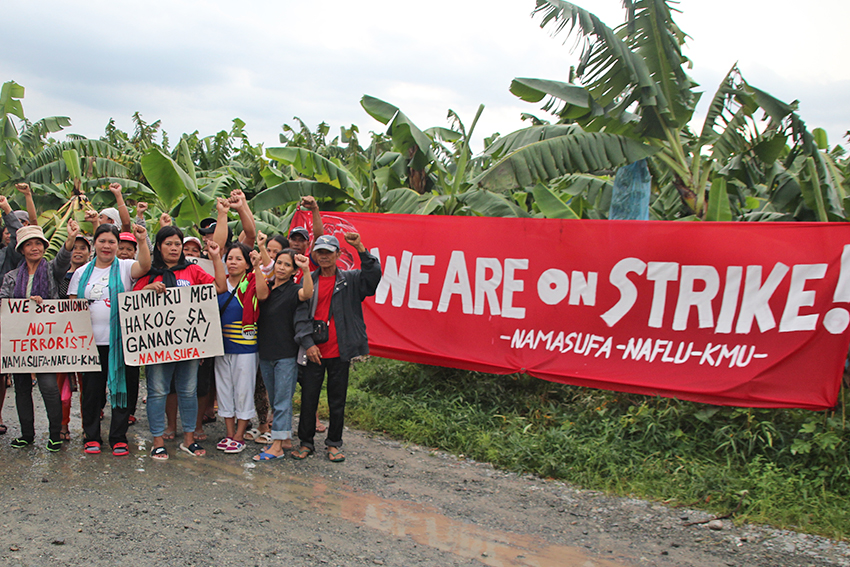 The Sumifru workers’ union, NAMASAUFA, said the company’s refusal to negotiate with the union for collective bargaining, prompted them to strike, where they halted operations in seven of Sumifru’s 11 packing plants in their community in Compostela. The paralysis resulted to a loss of P10 million a day. (Mara S. Genotiva/davaotoday.com)

The 900-member Nagkahiusang Mamumuo sa Suyapa Farm (NAMASUFA) under the National Federation of Labor Unions-Kilusang Mayo Uno (NAFLU-KMU) is demanding that the management of Sumifru faces the union in negotiations for a collective bargaining agreement (CBA).

The workers have fought for CBA negotiations for almost 12 years. The union is demanding the regularization of workers and granting of benefits.

NAMASUFA President Paul John Dizon told Davao Today that the management has refused to engage in any negotiation for a CBA with the local union, insisting that NAMASUFA members are contractual workers hired by a third-party labor cooperative.

However, Dizon argued that the striking workers were covered by a Supreme Court decision in June 2017 recognizing that a formal employer-employee relationship exists between Sumifru and NAMASUFA members.

NAMASUFA was already certified as the exclusive bargaining representative of Sumifru workers in elections supervised by the Department of Labor and Employment (DOLE). No progress has been made since they submitted a CBA proposal on August 13 as the management ignored it, Dizon added.

Two conciliation hearings facilitated by the National Conciliation and Mediation Board (NCMB) were held since the SC decision was released. But only the company’s lawyer and human resource officer joined the meetings, a move slammed by the union, saying that they are “not decisive” in addressing their concerns.

READ: Strike looms as Sumifru refuses to negotiate for regularization of workers

Last month, 749 union members of NAMASUFA unanimously voted in favor of a strike. The strike notice filed by the union in September 4 has lapsed last September 27, prompting them to launch the strike after four days.

Dizon said the strike aims to pressure the management to recognize them as regular workers as mandated by law and to negotiate with the union.

“Sumifru will only face us [workers] and really address our concerns if we are on strike. We cannot put an end to our hardships unless we pressure them from the ground. We have been through mediation in the NCMB but nothing happened, resolution remains elusive,” said Dizon.

The union leader, who has worked with the company for five years, shared that not a single worker is recognized as regular even if they have served for more than 10 years. 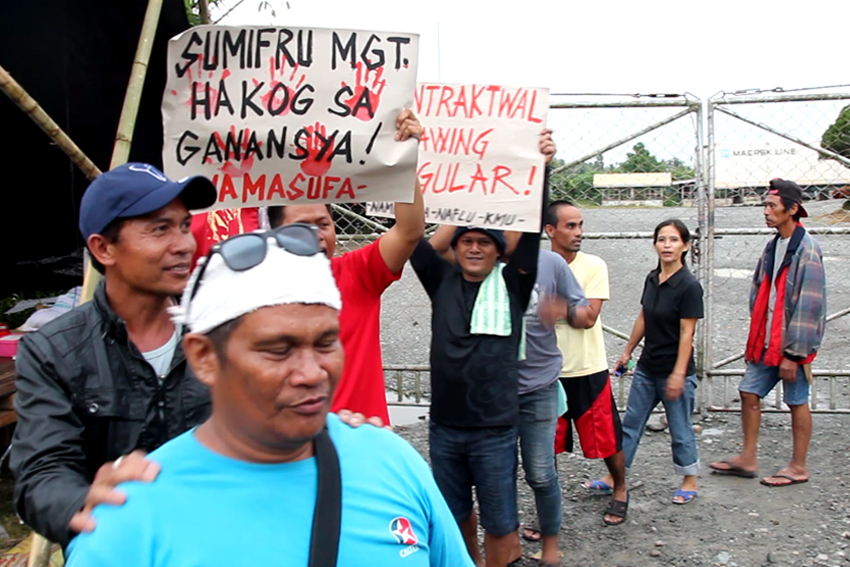 Around 900 workers of Sumifru Phils, a banana-export plantation in Compostela Valley, barricaded the company gates in their strike starting October 1 to demand the company to engage them in collective bargaining and regularization of their tenure. (Mara S. Genotiva/davaotoday.com)

Aside from regularization, the union wanted to include benefits in the CBA. Dizon said they are not entitled to any benefit such ss sick leave and vacation leave.

Alma Abraham, who has been serving the company for 15 years, said she was not able to file a leave when she was hospitalized after experiencing bleeding in February last year. She blamed the use of chemicals, fatigue and stress due to work.

The company considered her as absent resulting to no salary for a month.

She also added that they also shell out personal money to buy the protective equipment they need to use everyday on work like aprons, gloves and boots, since the company only provides it once a year.

Dizon added that many workers already retired but never received any compensation and benefits from the company.

They even launched a strike to ensure their PhilHealth, Social Security System, and Pag-IBIG Fund benefits after knowing that the company did not remit their wage deductions to these agencies.

He added that Sumifru makes P11 million daily in sales from its operations in Compostela Valley, “Yet they want us to be satisfied with our minimum wage (MW), which is one of the lowest MW rates in the country, which has never been enough for a decent standard of living. Our wages have become even more insufficient in the face of incessant price hikes due to the TRAIN law.”

On Wednesday, Carlo Olalo of Kilusang Mayo Uno-Southern Mindanao reported that around 15 unidentified men barged into the house of worker-union member, Mildred Maglahus.

Olalo said the men were looking for NAMASUFA Vice-president Elizar Diayon. Failing to find the union leader, “the men bolted out of the house and stole the food supplies in one of the protest camps.”

He also added that strikebreakers or scabs with military personnel disrupted the picket line in Sumifru’s Packing Plant 115 in Compostela letting pass vans carrying stalled bananas to the plant. The workers have resumed the strike.

In an interview with union leader Alma Abraham, she said that four men visited their house in Barangay Pilar Babag, Monkayo town on Tuesday morning.

Abraham said her daughter faced the men who identified themselves as “personnel of President Duterte”. They were looking for her.

The men showed a photo of a certain Grace, an alleged New People’s Army member, and asserted that they have seen Abraham working with her.

“My daughter relayed that the men said they were tasked to kill NPA members and told her to ask me to dismiss the strike,” Abraham added.

Due to fear for her life, Abraham immediately left home to seek sanctuary. She said this is the third time that unidentified men went to her house and tagged her as NPA rebel.

“Clearly, this is their way to harass us and undermine our legitimate demands as workers. We are not doing any illegal activity. We are just workers trying to make a living,” said Abraham.

Last August, NAMASUFA Board of Directors member Vincent Ageas survived an attempted slay try. Union member Jerson Lastimoso was also murdered in 2006, when a group of union members were ambushed by military elements.

In a fact-finding mission to Compostela Valley in April, Kilusang Mayo Uno revealed that Sumifru workers were being targeted and red-tagged by the 66th IBPA, and discouraged from joining NAMASUFA or any KMU-affiliated organization, or participating in union activities.

READ: Trade union violations revealed in fact-finding mission
Despite the harassments and sacrfices, Dizon said they will continue the strike, “this is our last card to pressure the management to really address our demands.”

Now on its fourth day, Sumifru has yet to face the striking workers. The company has also not yet issued a statement regarding the strike. (davaotoday.com)