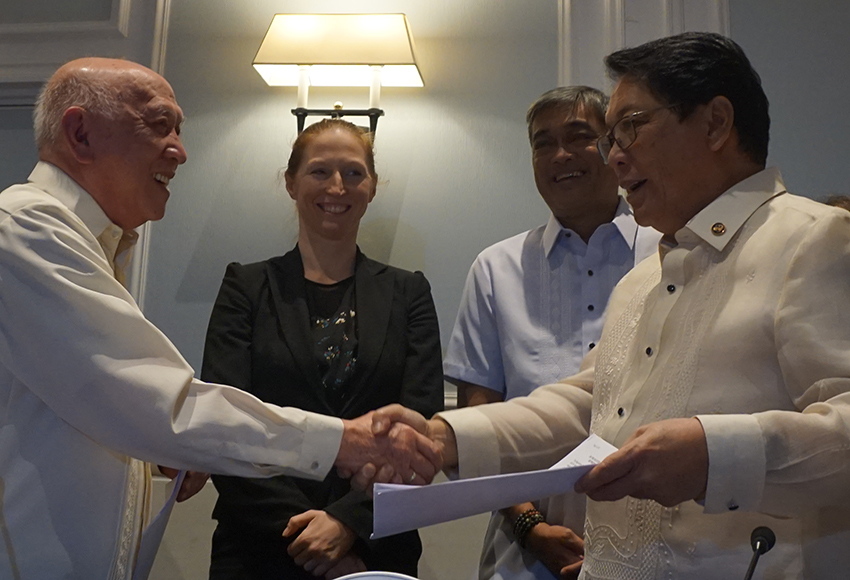 ROME, Italy — A member of the peace panel said there is a possibility for the government’s release of three remaining detained consultants before it resumes peace negotiations with the National Democratic Front of the Philippines  in April.

“We are positive because according to the chairperson, he said he will facilitate the release of the three consultants remaining immediately after this round,” said Atty. Angela Librado-Trinidad in an interview in Rome during the closing ceremony of the third round of talks.

Librado-Trinidad said they are now working on the process of releasing “all political prisoners starting off with the 200 through different modes.”

The modes could either be through bail, recognizance, pardon or other legal modes “acceptable to both parties,” Librado-Trinidad said.

Based on the Joint Statement signed by both Parties on Jan. 25, the GRP, with the assistance of defense lawyers, “shall expeditiously process the release of all political prisoners listed by the NDFP starting with the 200 qualified prisoners either through bail, recognizance, pardon or other legal processes in compliance with the CARHRIHL and to allow them to participate in activities and mechanisms of the peace process.”

The government panel also committed to file manifestations in support of the motions to extend the temporary liberty the NDFP consultatnts and staff who were granted bail and released in August last year.

According to the NDF, there are still 392 political prisoners languishing in various detention cells in the country.

In his closing statement, NDF peace panel chair Fidel Agcaoili emphasized the need to release the prisoners as a matter of compliance to the previously signed agreements between both Parties, including the Comprehensive Agreement on Respect for Human Rights and International Humanitarian Law and the Joint Agreement on Safety and Immunity Guarantees.

“We have said it before and we say it again. The release of political prisoners is not simply a goodwill measure on the part of the GRP nor is it a precondition. It is a matter of redressing an injustice,” Agcaoili said.

“It is a matter of compliance with the CARHRIHL. It is also a question of trust, of palabra de honor,” he said.

Agcaoili said the government panel and President Rodrigo Duterte promised to release the political prisoners “not just once, but several times.”

He said Duterte even recognized that the prisoners were facing “trumped up charges”. “It should only be simple rebellion,” Agcaoili said.

“Also among the detainees are more than a hundred ailing, elderly, long-held and women detainees whose releases has been promised,” he said.

After the third round of talks, the Parties agreed to continue to study the issuance of an amnesty proclamation which the NDFP said is the “most expeditious way” of releasing the prisoners. (davaotoday.com)