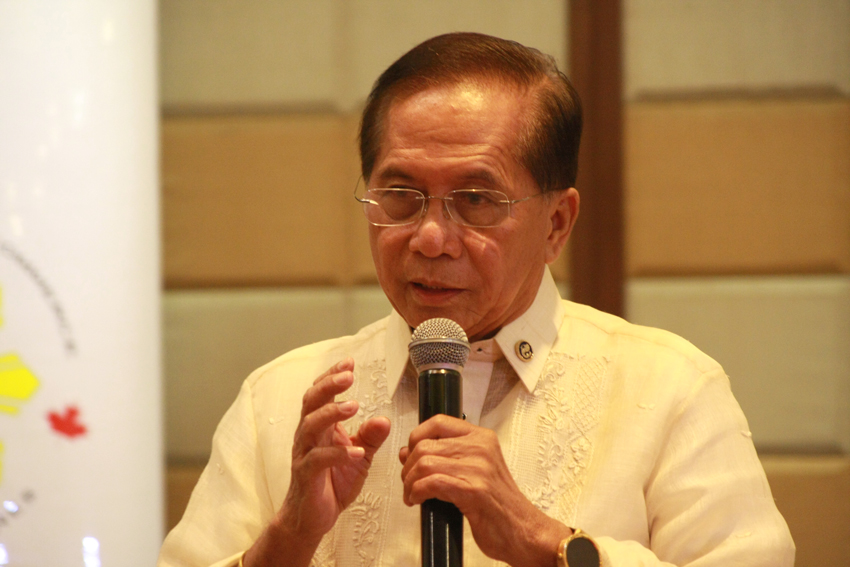 Presidential Adviser on the Peace Process Jesus Dureza during a talk with the members of the Canadian Chamber of Commerce of the Philippines on Monday, April 16, 2018 at the Marco Polo Hotel in Davao City. Dureza said he respects the position of Davao City Mayor Sara Duterte-Carpio who is against the reopening of the peace talks between the Philippine government and the National Democratic Front of the Philippines (NDFP). (Kath M. Cortez/davaotoday.com)

DAVAO CITY, Philippines — Presidential Adviser on the Peace Process Jesus Dureza said he respects the statement of Davao City Mayor Sara Duterte-Carpio calling on her father, President Rodrigo Duterte, not to pursue talks with the National Democratic Front of the Philippines (NDFP), after he announced that he is willing to give it another try.

During a talk with the Canadian Chamber of Commerce of the Philippines at Marco Polo Hotel on Monday, April 16, Dureza said the Mayor is entitled to her own opinion, and as Mayor of Davao City, she has the task of protecting her people.

“In fact, we welcome those statements because it also provides, perhaps, a more vigilant environment,” said Dureza.

In her statement last April 13, Mayor Duterte said that the resumption of talks with communists is “counterproductive and plainly useless.”

She also said that communists have shown no indication of their sincerity on the peace talks based on the recent attacks that happened in Davao.

Dureza clarified that he has nothing against the mayor and her statement against the resumption of the peace talks with the Reds, however, he reiterated that it is his responsibility to follow the President’s directives to resume negotiations.

The President earlier expressed his openness to resume talks with the NDFP, but with several conditions, such as a bilateral ceasefire agreement.

Also in a statement, Communist Party of the Philippines (CPP) founding chairman Jose Maria Sison said they are ready to resume peace negotiations and finish the draft agreements that were derailed after the talks collapsed in 2017.

“We are likewise open and ready to resume the peace negotiations and expect the GRP and NDFP negotiating panels to meet as soon as possible in order to make a significant advance on the basis of the drafts prepared on October 4, 2017,” Sison said. (davaotoday.com)