Duterte: no more foreign troops in PH in 2 years 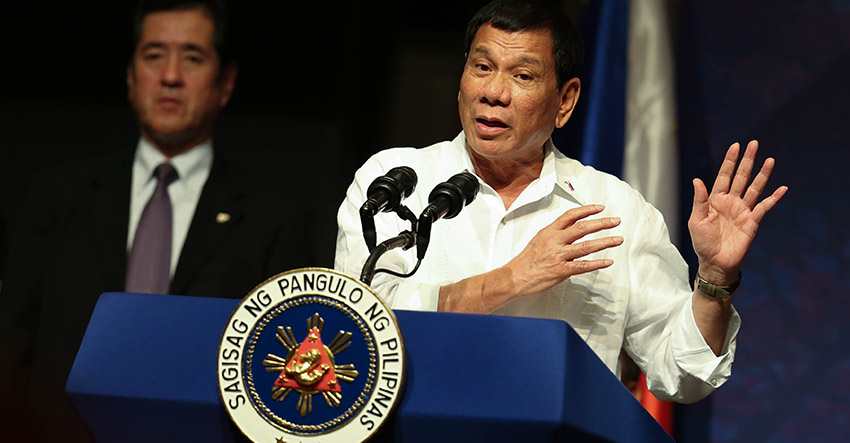 President Rodrigo Roa Duterte gestures in his speech as he addresses the Filipino community in Japan in a meeting at the Palace Hotel in Tokyo on October 25. (Karl Norman Alonzo/Presidential Photo)

DAVAO CITY, Philippines – President Rodrigo Duterte may abrogate executive military agreements with the United States in a bid to freeing the country of the presence of foreign troops in two years time.

The President made the announcement as he addressed the Philippine Economic Forum at the Convention Hall of Prince Park Tower Tokyo Hotel on Wednesday. Duterte is on his three-day official visit to Japan.

“I want maybe in the next two years, my country freed of the presence of foreign military troops. I want them out. And if I have to revise or abrogate agreements, executive agreements, I will,” Duterte said.

“This will be the last maneuver war games between the US and the Philippine military,” he said, adding that he wants to be friend to China and other nations.

“I do not need the arms, I do not want missiles established in my country. I do not need to have the airports to host the bombers with hydrogen bomb,” Duterte said.

This is not the first time Duterte spoke about abrogating military agreement with the US.

In September, Duterte in a speech called for the withdrawal of US special forces in Mindanao as they are targets of attacks by extremist groups.

During his speech in Beijing last week, Duterte announced separation from US both in military and economic. The President said the separation does not mean a severance of ties but separation on foreign policy.

Before his departure for Japan, Tuesday, Duterte said he does not want to see any foreign troops in the country.

The militant group Bagong Alyansang Makabayan lauded Duterte’s new pronouncements.
“We fully support the pronouncement of Pres. Duterte regarding the abrogation of EDCA, we have been calling for the abrogation of this onerous agreement signed under the Aquino administration that is a threat to our sovereignty ,” Duazo told DavaoToday in an interview.

Duazo said the public should support Duterte’s push for an independent foreign policy by calling for the pull out of US troops.

Duazo said despite of not having served any formal document on the abrogation of military agreement with the US, they believe the President is serious in his policy direction.

“We would like to believe he is serious because he is consistent despite not taking any legal action. His pronouncements are consistent and he should be supported by the people,” she said.

The Philippines and the US government signed the Enhanced Defense Cooperation Agreement in 2014, allowing the US to increase its military presence in Philippine military bases and to build and store fuel and equipment in the country.

The agreement was seen to modernize the Philippine military, however, in November last year, the Philippine Senate voted that it is invalid and ineffective asserting that Senate needs to concur on the treaties approved by the President.

But the Supreme Court affirmed in July, EDCA’s constitutionality saying it is an executive agreement that does not need Senate’s approval. (davaotoday.com)