Duterte reiterates: Spratly Islands ours, but… 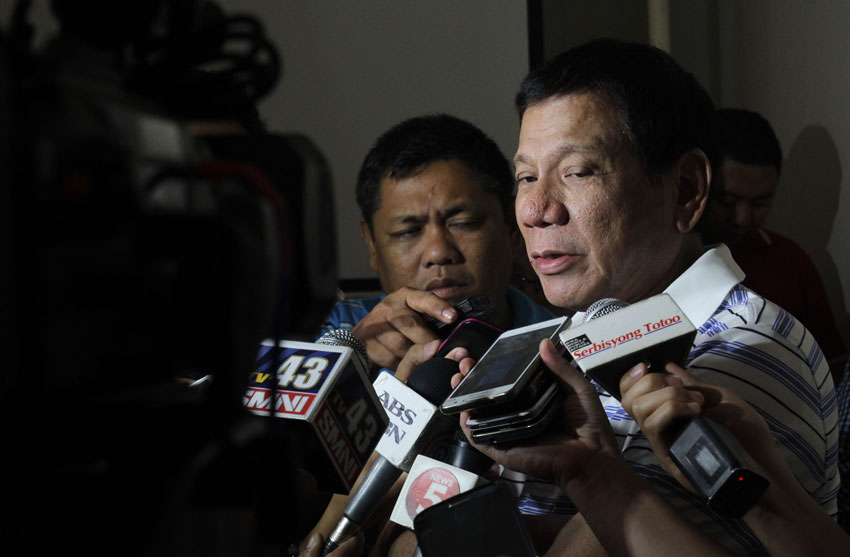 DAVAO CITY — Presidential aspirant Rodrigo Duterte insisted that the Spratly Islands belong to the Philippines but the Davao City mayor reiterated that the country is not prepared to go to war with China.

“We cannot go to war because we cannot win it. I will not waste the lives of Filipino soldiers and policemen,” Duterte said.

Duterte said if war breaks out under his presidency, he is willing to die to protect the country’s sovereignty.

“I will ask the Navy to deliver me to the nearest area tolerable to them and I will ride a jetski and carry a pole and a flag. When I reach Spratlys I will erect the Philippine flag,” Duterte said at a press conference in Palawan on Thursday, April 7.

“You want to shoot me with your missile? ​Fine,” Duterte said.

The Philippine Government filed arbitration proceedings with the United Nations (UN) Tribunal following its dispute with China. The Tribunal is expected to give its verdict in July.

Duterte said​, however, ​should China not insist on ownership, he is ready to have a joint exploration with the Asian superpower.

He said he will also ask China to build railways in Mindanao and Luzon.

“Do not talk about ownership and I will not make a noise. For the six years that I’m president I’ll shut up,” Duterte said.

Duterte led the recent survey conducted by Laylo Research Strategies last March 26 to April 1 where he got 30 percent approval ratings of the respondents. He was statistically tied with Senator Grace Poe who got 27 percent.

The survey had 3,000 respondents and a margin of error of plus or minus 1.8 percent.(davaotoday.com)