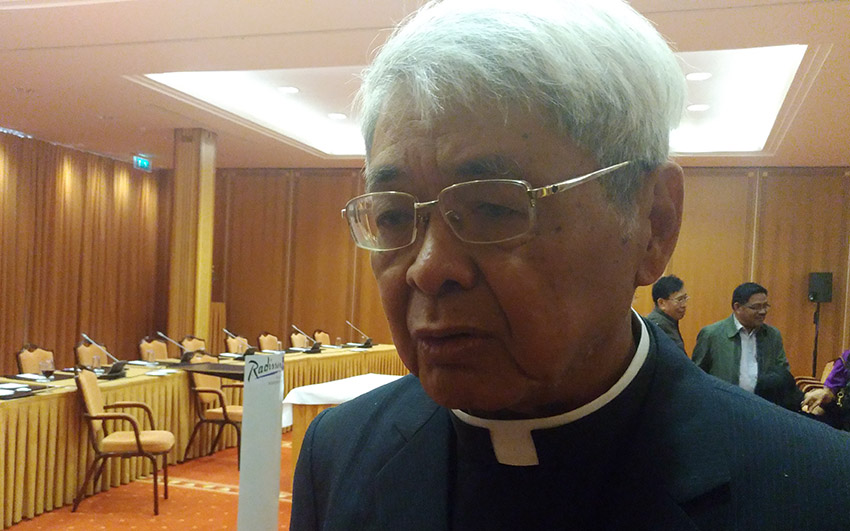 ‘WORK HARDER’. Archbishop Samuel Lasam Utleg of the Archdiocese of Tuguegarao appeals to negotiators from the government and the communists to work harder for peace by going beyond each one’s own position. Utleg officiated the Eucharistic mass attended by government officials and delegates from the National Democratic Front of the Philippines on Sunday morning, May 28 at the Radisson Blu Palace Hotel in Noordwijk Aan Zee, The Netherlands.(Zea Io Ming C. Capistrano/davaotoday.com)

NOORDWIJK AAN ZEE, The Netherlands — After an impasse on the fifth round of talks on the first day of the supposed opening ceremony yesterday, members of the peace panels from the government and the National Democratic Front of the Philippines gathered in a Eucharistic mass officiated by a Filipino Archbishop here Sunday, May 28.

During his reading of the statement, Utleg mentioned that Tuguegarao is an area where there is conflict.

“This is one reason why I’m here because one of the regions that is drenched in blood is where I am the Archbishop, so please work harder,” he said.

Citing the statement of Pope John Paul II, Utleg described that peace “is the fruit of justice.” He said peace is when people have what they need to live as humans.

“They maintain their human dignity and if people’s rights are respected and they have their basic necessities then I think peace can be achieved,” he said.

Utleg said he was not aware that there is a current impasse on the peace negotiations as the government demanded for the Communist Party of the Philippines to rescind its order for the New People’s Army fighters to intensify offensives amid the declaration of Martial Law in Mindanao.

Utleg stressed that the parties should go beyond their own positions to break off the impasse.

But he said in spite of the challenges, he is positive that the efforts of both sides will succeed.

This fifth round of talks is scheduled to discuss the two major parts of the Comprehensive Agreement on Social and Economic Reforms two major parts— the agrarian reform and rural development and the national industrialization and economic development.

After the mass, the panels met back at the negotiating table in a quite jovial mood compared to the first day. The session went on recess after a few minutes and the panels set another meeting at 4pm (10 pm Philippine time).

Men and women of peace

In his pastoral letter, Villegas said the negotiators on both sides should take bold steps to bring peace.

“Intransigence is not strength. Humility is. That one has stood one’s ground is not necessarily the best that can be said of anyone. That he has sown the seeds of peace is to say of a person that he is blessed!,” the statement reads.

Villegas also said that the public should be determined to stand for social justice. “For Christ’s peace to pervade over our land, we need men and women of peace. We trust that our negotiators — on both sides — will be anointed by God’s Spirit so that His sons and daughters in this land that has already been drenched by so much blood may at last walk the ways of peace,” said Villegas.

Meanwhile, Anakpawis Partylist Rep. Ariel Casilao said the people will be at the losing end if the fifth round of the talks gets cancelled.

Casilao, who is part of the House of Representatives delegation to observe the fifth round of peace talks here said: “It would be very disheartening if the talks will be cancelled, in fact the masses interest is at stake here as the main contention of the talks is their welfare which includes free land distribution, national industrialization, and environmental protection and among others.”

Casilao said even with the natural contradictions faced by the Parties, negotiators should not back down.

He said the peace table is still the proper venue to address the issues raised by both sides.

“The Comprehensive Agreement on Socio-Economic Reforms which in the heart of its agenda are the decades-long problem of the peasants over landlessness. Many who are joining the New People’s Army were peasants who have been stripped of their lands or victims of previous pro-land lord land reform program. This is to be settled by providing distribution of land for free in which agreed upon by both parties,” he said.(davaotoday.com)