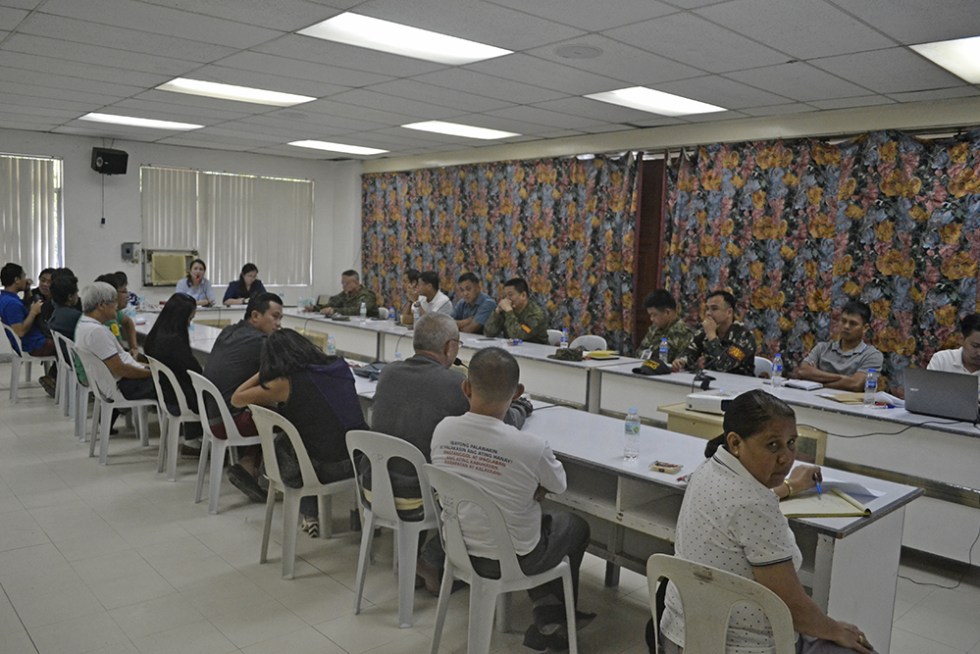 BANNING PROTESTS. City Councilor Mabel Sunga Acosta, chairperson of the committee on public safety presides over the public hearing
to discuss the request of the Presidential Security Group (PSG) to ban all forms of protests outside the Department of Public Works and Highways compound which houses the Presidential Guest House in Panacan in Davao City. The public hearing was attended by the city’s security sector and leaders of the progressive group, Bagong Alyansang Makabayan. (Mara D. Genotiva/davaotoday.com)

DAVAO CITY, Philippines – Progressive groups and security sectors ​met ​here on Friday, November 24, in a public hearing to discuss the request of the Presidential Security Group (PSG) to ban all protest outside the Presidential Guest House in Panacan.

In a letter to Davao City Mayor Sara Duterte-Carpio, ​the PSG said ​it is its mandate to “ensure that threats, hazards and security vulnerabilities are addressed” since the DPWH-11 compound serves as the “alternative seat of government”.

The PSG suggests the banning of all forms of protest from crossing Panacan to the bridge near Eastmincom.

Acosta s​ai​d ​Panacan road ​has become a “ch​okepoint”​, or point of traffic congestion in the nothern approach to the city and ​warned ​that public assemblies ​”​will cause heavy traffic congestion “affecting the general welfare of Davaoenos”​.​

Militant activists expressed their opposition to the PSG’s request, saying the prohibition will tamper ​with ​the public’s right to peaceful assemblies, freedom of expression, and redress of grievances.

“Where do they expect us to hold protests? It just shows that the government do not want the people to expose the truth that even in the President’s turf, there are many victims of human rights violation and injustices,” said Sheena Duazo, secretary general of BAYAN-Southern Mindanao Region.

Why protest in Panacan?

PSSCC head Benito T. De Leon told the protesters should take advantage on the designated rally zones, ​one of which is the Freedom Park.

But Kilusang Mayo Uno Southern Mindanao Region (KMU-SMR), Carlo Olalo, said that they ​have to ​bring the issues to concerned government agencies and protests are held in Panacan to “condemn the human rights violations perpetrated by military forces headed by the Eastmincom.”

Olalo cited the series of rights abuses experienced by Lumad schools in the countryside where students and teachers are allegedly threatened and vilified by the military.

READ: INFOGRAPHIC: Why are Lumad students protesting against DepEd?

“We also hold protest in front of DPWH to directly address to President Duterte our call to end the militarization of IP communities because the targets are not members of the New People’s Army,” Olalo added.

He added that protesters also ensure that they have mechanisms not to affect the traffic condition every time they hold a rally along Panacan.

Karapatan Southern Mindanao spokesperson Jay Apiag said, “Protests have always been capitalized as the cause of traffic congestions.”

“There was no inconvenience caused since we are adhering to the rules and regulations in conducting peaceful assembly by providing marshals,” he said.

Councilor Acosta said that Mayor Duterte-Carpio was amenable to the PSG’s request and wanted to resolve the issue as soon as possible.

The security sector also supported the banning of protests in Panacan.

Acosta ​said she ​hoped that they will come up with a resolution by the second public hearing scheduled on Monday, November 27.

Panalipdan-SMR spokesperson University of the Philippines ​Prof. Kim Gargar urged the city government not to rush but instead study carefully the matter on hand.

He said even when there is a law that prohibits the conduct of rallies, people still hold protests “as long as their rights are violated.”

He said the long term solution is for the government to address the issue raised by the protesters, especially the militarization in the region. (davaotoday.com)