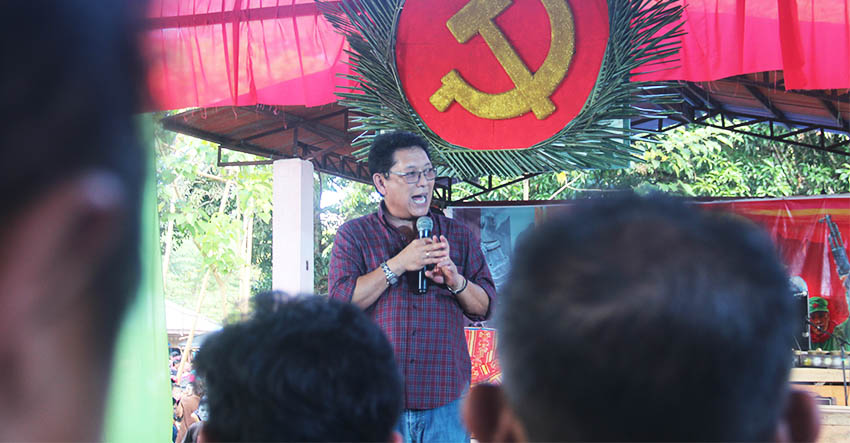 Government of the Republic of the Philippines peace panel chief negotiator Silvestre Bello III attends the celebration of the Communist Party of the Philippines’ 48th anniversary here on Monday, Dec. 26. (Earl O. Condeza/davaotoday.com)

DAVAO CITY, Philippines – The government peace panel said around 17 to 20 political prisoners will be released before the year ends.

“Hopefully, around 17 to 20,” GRP peace panel chair Silvestre Bello III said when asked if there will be political prisoners to be released before the year ends in an interview during the 48th anniversary celebration of the Communist Party of the Philippines here Monday, December 26.

Bello has previously announced that the government will possibly release around 50 to 70 political prisoners, including five to seven NDF consultants before December 10.

But he said some prisoners have pending cases in court.

“So it is the court who will decide if they will be given temporary liberty,” he said.

Bello said even if the Christmas Day is over, the President will keep his word on releasing the prisoners.

President Rodrigo Duterte earlier announced that in time for Christmas, he would order the release of elderly and sick detainees for humanitarian reasons. However, Duterte also said that there would be no more releases of political prisoners unless the National Democratic Front of the Philippines signs a bilateral agreement.

But the government peace panel said the President is still committed to his promise of releasing the prisoners.

Bello assured rebel leaders that some of the sickly and elderly political detainees would be released soon.

He also said that the next release of prisoners for humanitarian reasons is not tied to the bilateral ceasefire agreement.

“It is just a matter of time. The president will keep his word,” Bello said in the sidelines during Monday’s event.

In a press release by the Office of the Presidential Adviser on the Peace Process on Tuesday, it said Presidential Peace Adviser Jesus Dureza also confirmed that a directive has already been issued for the release of some 17 or 20 detained rebels.

“Let us just wait for the formal announcement of the president,” Dureza was quoted as saying.

Bello previously announced in a press conference here that 50 to 70 political prisoners would be released before December 10.

“Maybe before December 10 we will have the release of about 50-70 detainees on humanitarian grounds. There are also five to seven consultants to be released by pardon because they are consultants in the peace process,” said Bello in a press conference on Nov. 30 here.

Asked why the number of the prisoners to be released has decreased, Bello said that the judicial process of releasing the prisoners is causing the delay.

“There are some legal processes that we have to comply before they can be released,” he said.

Bello said he will be meeting with the president on December 29 and will again bring up the matter.

Bello was among the Cabinet secretaries who attended the CPP’s anniversary celebration held in Paquibato district here.

The anniversary coincided with the CPP’s launching of the “National Peace Assembly for Just and Lasting Peace.” (davaotoday.com)