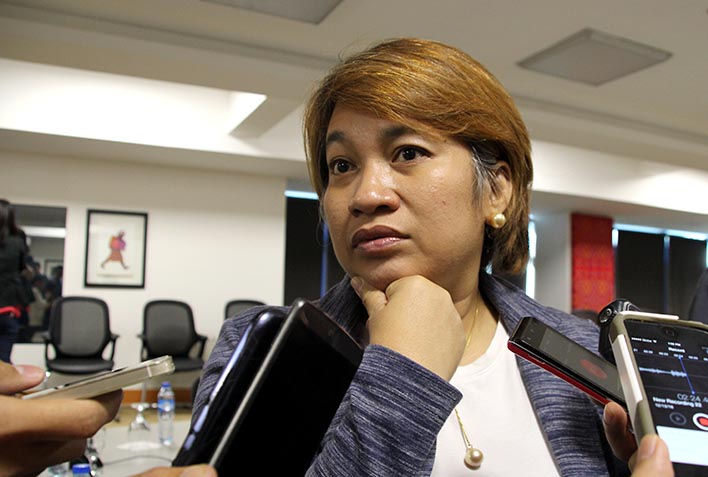 CLARIFICATIONS. GRP peace panel member Atty. Angela Librado says President Rodrigo Duterte is still very much intent on releasing more political prisoners, but said it was in the understanding that the release would be in tranches. Librado made the comments in a peace forum held at the Ateneo De Davao Univerity on Tuesday, Dec. 13 (Paulo C. Rizal/davaotoday.com)

DAVAO CITY, Philippines — The government peace panel  announced it will release the sick and the elderly prisoners before Christmas, allaying fears that the ongoing peace negotiations with the communists will collapse.

In a press conference here Tuesday, Atty. Rene Sarmiento, government peace panel member added that the release of the remaining 130 to 400 political prisoners “are more difficult since there are legal processes that needs to be followed.”

The legal and judicial tact taken by government authorities right now was not similar in August  when it was able to release 22 jailed consultants of the National Democratic Front, a move many advocates hailed as unprecedented.

Atty. Angela Librado-Trinidad, also a member of the GRP said  they are confident that the president has not yet abandoned his position that he will release the prisoners.

Librado-Trinidad added that the release will have to be “in tranches”.

“It is not understood to be now or immediately; it has to go through a lot of procedures, one of which is legal and judicial,” she said.

She said Duterte “never said that he will not release, only that, he has made mention of another equally important issues which is the bilateral ceasefire.”

“These two are very important issues which both panels are aware of. There is the commitment to release and that the government is trying its best to review the cases based on the information supplied by the NDF counsels because these cases are allegedly unfounded or trumped up,” she said.

“After which this has to be approved by the President. So the recommendations have  actually been done,” she said.

Trinidad clarified that the President, as the principal, “will have to decide on whether the amnesty will be declared anytime soon or the releases will be done anytime soon.”

She aid both parties are now working on the issues “in a way that is acceptable and doable.”

“We do not see this and we will not look at it as a hindrance, only a hump in the peace negotiation. And we will proceed with the January talks because equally more substantive items are on the list,” she said.

During his speech before the Filipino community in Cambodia Tuesday night, Duterte reiterated his stand that he will not release more than 100 additional detainees.

(I told GRP peace panel chair Silvestre “Bebot” Bello, no. I have conceded too much, even too soon. We already released their leaders, the Tiamzons, I even talked to them in Davao. They went there to ask for additional 130).

Duterte said he wants to see a document of a bilateral ceasefire agreement that is indefinite.

NDF senior adviser Luis Jalandoni said the release of the prisoners “is first and foremost an obligation of the GRP under signed agreements.”

“While it plays a part in building an atmosphere of trust and confidence in the negotiations, the release of political prisoners cannot be reduced to a simple act of goodwill that the GRP can opt to take or not,” he said. (davaotoday.com)