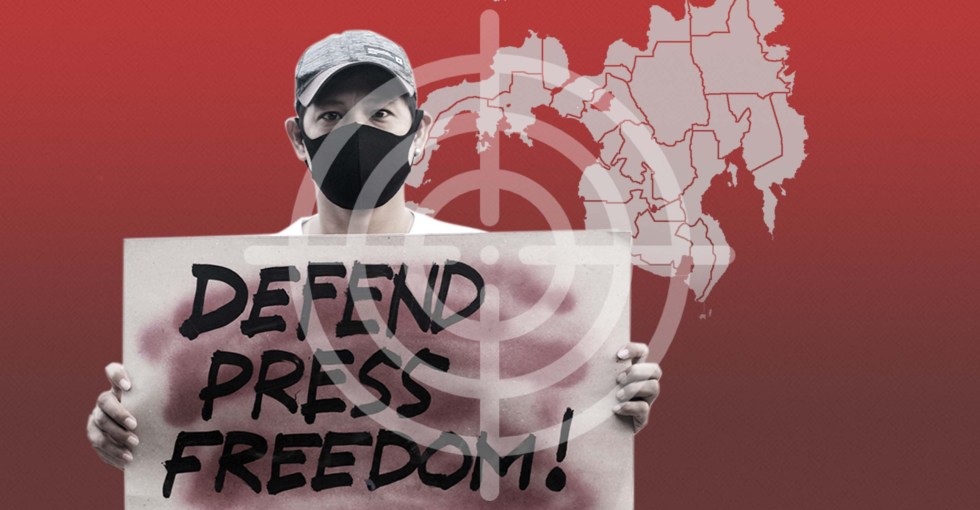 DAVAO CITY, Philippines – “Can’t remember the number of times,” says Julie Alipala, a veteran journalist based in Zamboanga about the threats she experienced for covering sensitive issues on human rights in Zamboanga, Sulu and Basilan areas.

“(There were) death threats verbally and through phone calls, an attempted abduction of my son, surveillance, phone bugging, banning me in coverages, online trolls attacking me , doxing, bullying, death threats, robbery at home (all my gadgets taken), and offering settlement money, etc.”

Alipala, who writes for the Philippine Daily Inquirer, has received these constant stream of threats since 2016. Covering issues such as peace, security and human rights in the region has earned her both trust and distrust.

It was one of her story in 2018, where she uncovered that the seven alleged Abu Sayyaf armed group killed by the military in Sulu were actually farmers, which made her a target online as she was accused as a paid propagandist of the ASG.

One Facebook page called “Huwag Tularan” (Don’t Emulate) even posted the photo of Alipala and labeled her a “terrorist”.

Alipala still remains unfazed, as she also takes to social media to engage the public on many issues.

But the role of media as watchdog has been more under siege in President Rodrigo Duterte’s administration since 2016.

In the fourth year of the administration, the passage of the Anti-Terrorism Act and the attacks on members of the press from the shutdown of ABS-CBN and the libel conviction against Rappler CEO Maria Ressa, shows the authoritarian course of the president that includes attacking the free press which has been critically reporting issues in his administration.

“It is not easy to be a journalist in the Philippines, much less be a good one. Even to be a niggling journalist requires self-confidence and courage,” says Nonoy Espina, chairperson of the National Union of Journalists of the Philippines (NUJP), which has been at the forefront of defending members of media and their institutions.

Despite the commitment of the administration to ensure the safety of journalist by establishing the Presidential Task Force on Media Safety; Philippine journalists are less than convinced.

NUJP’s Safety office has now recorded 16 killings of media workers all over the country with most cases happened in Mindanao.

READ: In 2019, attacks vs journalists continue

It even went far to claims that there is a P1 million bounty for the death of Corrales and false information that he is facing a criminal case of rape with murder of a child.

“It would be hypocritical of me to say it hasn’t affected the way I report. When I was red-tagged, at first, I felt what the veteran reporters have been talking about – the chilling effect. As an editor, I would shy away from any reports that deal with the peace process in general and any news stories that report on either the state forces or the armed insurgents,” Corrales admitted.

Current and past officers of the NUJP Cagayan de Oro were also tagged in flyers and posters posted last year in the city and other towns in Northern Mindanao, which branded them as CPP members.

The NUJP chapter along with other local rights defenders who were also red-tagged held dialogues with the city mayor and councilors, demanding local government action against those spreading misinformation.

Another dialogue was held with military officers from the 4th Infantry Division who denied any involvement in this propaganda.

Even during the pandemic, the attacks on the media community had not stopped.

Erwin Mascariňas, a photojournalist based in Butuan City, received a subpoena in June from the National Bureau of Investigation (NBI) for a cyber-libel case complaint. The complainant was not identified except the law firm that filed the petition was the Uy Cruz Lo Associates Law Firm in Davao City.

The law firm is linked to similar subpoenas sent to other social media users. It was believed the complaint on Mascariňas stemmed from a Facebook post showing the senator with three celebrities distributing assistance to fire victims in Butuan City last March that did not follow quarantine protocols. The subpoena was bothersome for Mascariňas that he stopped his social media news blog for a month.

Media freedom is still threatened with a law granting the president ad-hoc emergency powers which resulted to charges against journalists. Two community journalists in Luzon, Mario Batuigas, owner of Latigo News TV, and Amor Virata, a vlogger were accused of spreading “false information on the Covid-19 crisis” and alleged violation of section 6(6) of Republic Act No. 11469 or the ‘Bayanihan to Heal as One Act’.

They are facing the possibility of two month imprisonment and paying a P1 million fine.

The government has also gone after alternative media or the independent media groups in the regions exposing more human rights issues.

NUJP continues to battle for the media people’s protection from attacks. It is one of the petitioners to the Supreme Court on the Anti-Terrorism Act for its provisions that stifle media and people’s freedom of expression. Corrales and other journalists are also individual petitioners. (davaotoday.com)