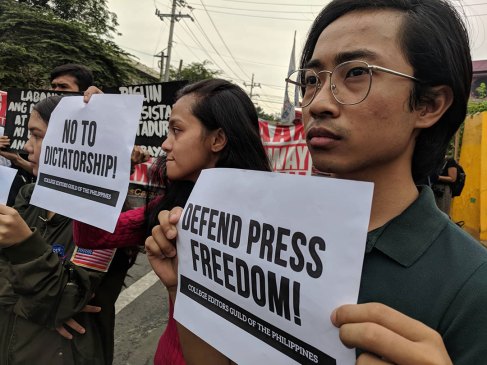 DAVAO CITY, Philippines – Journalism in the country, under the term of President Rodrigo Duterte, is a dangerous endeavor, with a number of the members of the press under constant threat and restrictions by agencies of government.

This was the message that various media groups in the Philippines declared in their reports
as the World Press Freedom Day is commemorated on Thursday, May 3.

The media entities to include the Center for Media Freedom and Responsibility (CMFR), National Union of Journalists of the Philippines (NUJP), Philippine Press Institute (PPI), and Philippine Center for Investigative Journalism (PCIJ) also uttered fear and deep concern for the lives of journalists in the country as the continuing attacks, especially from the government, are unabated.

The groups said Duterte’s “complete disregard” of press freedom has fashioned out a kind of delimited information that was downloaded, through the government’s machineries, into the minds of Filipinos.

“Rodrigo R. Duterte’s presidency has altered and controlled the public discourse so radically in its favor in ways rude and bold. Its tragic result: it has restricted and narrowed the celebrated freedom of the Philippine press and the people’s cherished right to know,” the report emphasized.

“The unrelenting attacks on press freedom carry deeper consequences, “the group added; “the most glaring is the diminishing of the news media and the weakening of the capacity of the news media to sustain the people’s unfettered exchange of ideas about public issues.”

The group cited the restraints the Duterte administration imposed to the press in news gatherings during the Marawi siege, the war on drugs, over allegations of corruptions of government officials especially those in higher positions, on the questions about the wealth of the President’s family, on federalism and charter change, the shutdown of Boracay, and on the issues that surround the incursion of China to the West Philippine Sea.

“Presidential intolerance of criticism is now a well-established aspect of Duterte’s leadership. While he is not the only chief executive who has become sensitive to press criticism, Duterte has made sure that everyone understands that misfortunes could hound and befall his critics.”

The group also acknowledged some complications that affected the practice of the press in the country with considerations to “the economic inequalities among media organizations, the poor pay for many working in the provinces, and the opportunities for corruption for those vulnerable to political manipulation.”

Results of monitoring conducted by CMFR and NUJP reveal of 85 cases of attacks to press freedom perpetrated by the administration of Duterte from its day one in power until May 1 of 2018.

According to CMFR and NUJP, these cases include the killing of 9 journalists while performing their duties focusing on drug trade, crimes and corruption; the filing of 16 libel cases; 14 cases of online harassment perpetrated mostly by Duterte supporters; 11 death threats, after delivering reports critical of public officials, including Duterte; 6 cases of slay attempts, mostly by gunmen riding in motorcycles; 6 cases of harassment, mostly by state officials/agencies; 5 cases of intimidation, mostly by local officials; 4 cases of website attack; 4 cases of physical assault, mostly by local officials; 3 cases of cyber libel; 3 instances of reporters barred from coverage, by the Office of the President; 2 cases of registration revoked or franchise denial; 1 strafing incident that occurred in Region XII; and, 1 case of verbal assault in Metro Manila, excluding multiple instances when the President himself took verbal broadsides, cursed, and scolded journalists, and threatened certain media agencies with closure.

“Nearly all media platforms had been bruised and battered,” the group declared, adding that the recorded 85 cases have affected journalists and media agencies from radio, 30 cases; online, 22 cases; print, 19 cases; television, 12 cases; and online print/radio/TV and photojournalism, 1 case each.

The group took note of the emerging constitutional flaws and weakness in the government system that led to the failure to prosecute those responsible to media killings, an enigma dubbed as the “culture of impunity”.

“Such violence grows as it feeds on the indifference of many, including some working in the media who also believe, as some government officials have claimed, that those who are killed are corrupt,” the group said.

“Comparing to the past regimes, the group said, the number of journalists killed during the 22 days of Duterte administration matches to the deaths recorded in the same period during the term of Benigno Aquino III.”

Since 1986, the group has already documented 156 cases of journalists killed in the country with only 17 cases partially solved because only the gunmen were apprehended and prosecuted while those behind the killings remain free.

The group also mentioned the infamous Ampatuan Massacre of 2009 where 32 journalists were killed but no justice was rendered until today.

“A strongman president could go far, if he chooses, to improve the capacity of police for forensic investigation as well as strengthen the prosecutorial skills of lawyers working in the Department of Justice. Such efforts would redound to the benefit of all Filipinos, especially those without the means to hire their own lawyers, and not just the besieged workers of media,” the group said.

Anti-media propaganda by the state

“Widespread discredit primarily led by Duterte and the so-called regime-sponsored trolls has affected most of the media entities in the country,” the group said.

Such act is being carried out by Duterte himself to show to the public that news organizations are out to spread “fake news” and scandalize the government.

“Over social media, journalists and media organizations continue to be attacked by regime-sponsored trolls. Hate speech and threats are perennial and rampant occurrences in the comment sections of reports critical of the administration,” the group said.

The group added: “The phenomenon can be traced to 2016 when in an obviously orchestrated campaign, some bloggers and social media pages trumpeted Mr. Duterte’s candidacy for his promise of change. When he won the presidency, these same bloggers and pages continued to function as disseminators of his every word and even of false information. This they do while demonizing, along with the political opposition, his critics, dissenters, including journalists doing their mandated duty of reporting the truth.”

“The prevalent attacks on various media entities are all focused to produce one result, and that is to control the media,” the group noted.

“To achieve full control on information, the state now uses its power with hostility and with utter disregard for the constitutional protection of the press from incursion on press freedom, “the group pointed out.

“Mr. Duterte seems ready to do just as he pleases — heap personal insult at his perceived enemies and proclaim damning charges without evidence to discredit and intimidate the press, from the presidential podium,” the group said, adding that the President has brandished the power of fear.”

But despite the challenges and real dangers that every member of the press in the country face today, the group calls for courage and determination to stand firm for press freedom and democracy.

“To stand firm and to stand united for press freedom and democracy, to speak truth to power and to keep power in check — this much the press owes the people. Whoever is president, the paramount duty of a free press in a democracy is to defend and uphold the people’s right to know, in courage and in unity,” the group said. (davaotoday.com)