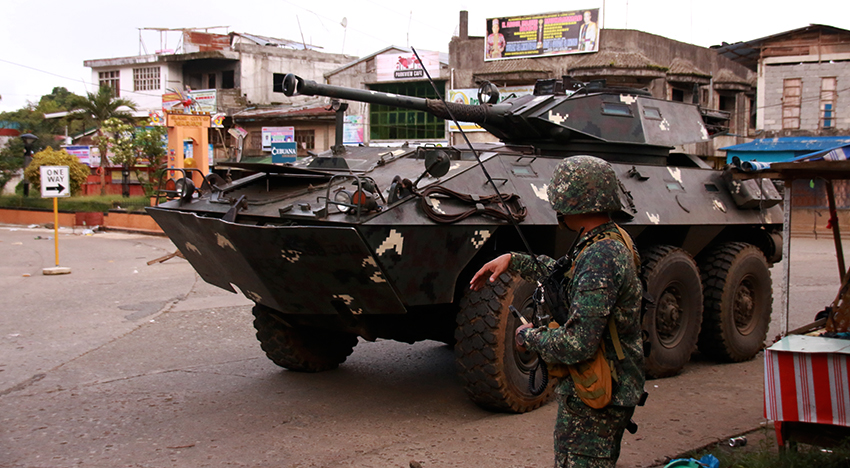 DAVAO CITY, Philippines — It’s been one year since President Rodrigo Duterte imposed martial law in Mindanao, but for the National Democratic Front of the Philippines in Mindanao (NDFP-Mindanao) the decree only worsened the situation in the island, largely to the lives of ordinary civilians and their communities.

In the statement it issued to commemorate Duterte’s one year of martial rule in the island, the NDFP said more or less 72 percent of the entire combat-effective troops of the Armed Forces of the Philippines (AFP) are now positioned in various areas in Mindanao.

This is composed of 51 army maneuver battalions, aside from the support of the naval and air force units, the NDFP added.

But what is glaring in terms of consequences to such imposition is not on the quelling of what the government perceived as “terrorists” who occupied the Islamic City of Marawi on May 23 last year, but of the continuing ill-effects of full militarization especially in the rural areas of Mindanao, it said.

“The NDFP-Mindanao stands alongside the Bangsamoro, the Lumad and the people of Mindanao and the country in condemning the atrocities of the US-Duterte regime’s martial rule since its imposition on May 23, 2017, which stemmed from the AFP’s failed attempt to capture Abu Sayyaf leader Isnilon Hapilon,” said NDFP-Mindanao spokesperson Joaquin Jacinto in a statement on Friday, May 18.

While the relentless military action resulted to the complete ruin of Marawi City, the death of thousands of civilians and the displacement of nearly half a million residents, the NDFP-Mindanao maintained that persistent militarization “virtually created an atmosphere of fear and intimidation for the general populace in Mindanao.”

“Under martial law, the AFP’s Oplan Kapayapaan unleashed vile military operations in all regions in Mindanao that made full use of aerial bombardments and artillery fire to satisfy Duterte’s order to ‘flatten the hills’,” Jacinto claimed.

Cases of human rights violations to include extrajudicial killings, indiscriminate firing, prohibiting or limiting farmers to attend to their farms were also rampant as the martial law practically granted the military and police the “full license and control in containing and engaging against whomever the reactionary state considers as terrorist threats,” the statement added.

“Duterte’s martial law is no different from that of Ferdinand Marcos,” the NDFP-Mindanao argued, “as the decree is being exploited to suppress peoples’ rights.”

The group also scored the rehabilitation being done by the government in Marawi City, saying that the restoration efforts do not serve the interests of the residents.

“Clearly, the so-called ‘rehabilitation’ planned out by the fascist US-Duterte regime is only intended to serve the profit-hungry interests of capitalists who have initially invested in the Marawi siege to secure for them profitable business ventures; and at the same time to secure new military bases for the AFP as well as for the US Armed Forces in the implementation of Operation Pacific Eagle,” Jacinto said.

In the same statement, the NDFP-Mindanao urged the people “to unite and launch protests to press the US-Duterte regime to bring the people of Marawi back to their homes and fully restore their livelihood, and bring forth a resounding call to put an end to the death and destruction of Duterte’s highly repressive martial law.”

Jacinto said series of protest actions were already launched in Mindanao and the rest of the country that condemned the atrocities of Duterte’s martial law.

Despite the calls of lifting the “oppressive” decree, Jacinto said the Duterte administration “extended the martial law imposition until the end of this year, widened its scope, and maliciously included the CPP (Communist Party of the Philippines) and the NPA (New People’s Army) in its terror tag.” (davaotoday.com)