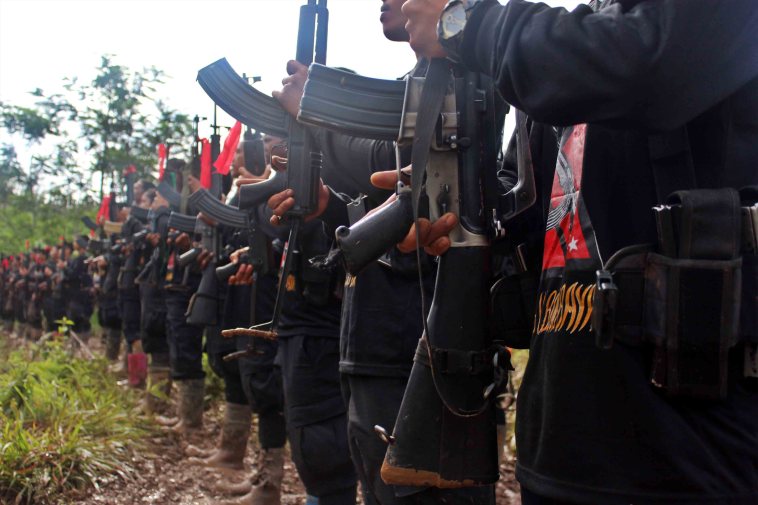 Members of the New People’s Army in Compostela Valley in their formation during the anniversary of the Communist Party of the Philippines last December 26, 2014. (Earl O. Condeza/davaotoday.com)

DAVAO CITY — The National Democratic Front of the Philippines (NDFP) announced Tuesday, April 12, that they will open the line for negotiations for the release of police and soldiers who are in custody of the New People’s Army (NPA).

On April 3, the NPAs put up checkpoints in seven areas in Mindanao and captured as their prisoners three police officers and two soldiers.

The negotiations would ensue once the prisoners are in secured areas for their eventual release, Cesar Renerio, spokesperson of NDFP-Mindanao said in a statement.

Renerio said they are thankful for the Governor Yevgeny Emano of Misamis Oriental and Bishop Felixberto Calang of the Philippine Ecumenical Peace Platform for acting as third party facilitators for the release of the prisoners.

Reds to release videos of POWs

He said the families should also understand the “realities of a civil war” in the country.

POWs still ‘part of the oppressed’

Despite that, he said the revolutionary movement treats them “as part of the oppressed”.

“But because of the war, there are revolutionary policies that we follow before we release them to you, we hope you understand,” he said.

“There is no need to hold them much longer if they have no serious case against the people,” he said.

Renerio added that there should be a favorable condition for the release of the prisoners and leaves it up to the government forces. (davaotoday.com)