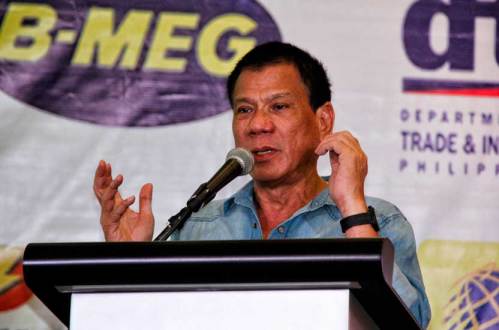 DAVAO CITY – City Mayor Rodrigo Duterte had this advice to agri-business players who might be asked for ‘revolutionary taxes’ by the New People’s Army: just pay them.

The mayor raised this point, along with other concerns on peace and order, in his address during the opening day of the Davao Trade Expo 2013 last Thursday at the SMX Convention Center.

“It’s a fundamental question for business: is it good to do business in the mountains? Do we give in to them?” the mayor asked.

He said as mayor of a city in Mindanao dealing with “revolutionary” and “ideological” groups such as the Communist Party of the Philippines and Moro revolutionary groups, the way to deal with them is to talk to them.

“It’s a matter others want to avoid. But it’s a reality that has to be talked openly, since the NPA is more active now in Region 11, notwithstanding the statements from the AFP (Armed Forces of the Philippines),” Duterte said.

December last year, Duterte drew flak when his pronouncement during a visit at the Communist Party of the Philippines quoted him as saying that he pays revolutionary tax. A youtube video later circulated accusing him of giving P125 million as annual revolutionary taxes.

He clarified that he attended the CPP anniversary at a Typhoon Pablo-affected area where he gave some amount for the typhoon victims; the funds were sourced out from private donors. He said he merely kidded that the funds were the taxes that he would pay to NPAs, but because there was no barangay captain around to receive the donation, he coursed it through local NPA leaders.

In Thursday’s trade expo, Duterte said, “I can talk, but I can’t talk them out of their ideology. You have to realize the Communist Party is entering its 45th year here. You have to admit there’s been historical injustice committed on the people.”

Duterte said the national government should deal with the revolutionary groups by talking peace.

“Crimes I can deal with it. But with the revolutionary (groups), I give it to the (national) government, but here, I advised government not to make arrests of revolutionaries” he said.

As to the NPAs asking taxes he said “I cannot put it to a stop. So factor that in your investments. If you pay to the BIR (Bureau of Internal Revenue), you prepare also for the NPA.” Some participants giggled and smiled on this remark.

Duterte went on and explained that the NPAs are open to discuss terms.

“You give credit to these revolutionaries, you can exchange words and deal with them,” he said, citing experience that the NPA could be negotiated in the release of captured government soldiers and police.

The mayor added his account when the NPA apologized for the grenade attack in a gym in Paquibato district that injured civilians and paid 5,000 pesos for all the victims.

“When they informed me they will pay 5,000 pesos, I said ‘good’. When I asked where they will get the money, they said they will get it from banana planters,” Duterte quipped.

The mayor also assured investors of safety from crime and from corrupt officials and police in the city.

He also assured efficiency in business applications in local government services, as he emphasized his “72-hour policy that all transactions will be done.”

“If this fails, bring your papers to my office and I will work on it,” the mayor said.

This year’s Davao Trade Expo, organized by the Davao City Chamber of Commerce, focused on the region’s agricultural expansion to boost production and income. The expo promoted “five golden crops” in agriculture namely coconut, coffee, cacao, corn and cassava. The event drew in around 500 participants and 200 exhibits in agri-business products. (davaotoday.com)