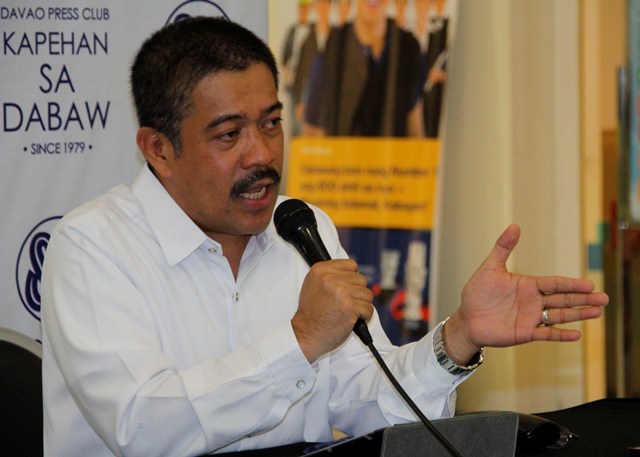 DAVAO CITY — A member of the activist Makabayan bloc in Congress said President Benigno Aquino III should be held accountable for the misuse of public funds under his discretion, from the controversial Disbursement Acceleration Program (DAP) to the Malampaya Fund.

He said the DAP was a mechanism designed by by Budget Secretary Florencio Abad of the Department of Budget and Management to impound savings from unused funds and reallocate them to other projects.

Zarate was the guest in Monday’s Kapehan sa Dabaw at SM City in Davao City,

The solon said the realignment was “premature as it was done in mid-year”.

The solon cited opinions of Constitutional experts, including  Jesuit Fr. Joaquin Bernas,  who said that the DAP would make President Aquino liable for impeachment, and also for filing of plunder charges against Abad.

The DAP came into public attention a few weeks ago from the privilege speech of Senator Jinggoy Estrada, one of the senators accused of plunder in the misuse of Congress’ Priority Development Allocation Fund (PDAF) or pork barrel.

Another Makabayan member, Gabriela Partylist Rep. Luzviminda Ilagan questioned the DAP’s allocation of P 1.8 billion for the Payapa at Masaganang Pamayanan (PAMANA) program under the Office of the Presidential Adviser on the Peace Process (OPAPP).  Ilagan said the money was “wasted” on government’s peace campaign given that “a situation of un-peace” is happening in Mindanao areas.

Zarate said that the Makabayan bloc has filed House Bill 2993, a bill to realign the Malampaya funds to the General funds to allow scrutiny on how the P 173-billion fund was spent.

He said the Malampaya fund is an off-budget item, sourced from royalties from oil drillings in the Palawan Coastline, which under Presidential Decree 910, is intended to support projects energy-related projects.

But Zarate said the Makabayan has questioned the administration’s use of P 423 million to purchase an old US Coast Guard vessel in 2012.

He also said that in 2011. Aquino reportedly spent P 150 million for the Pantawid Pasada Program which gave discount cards to jeepney and tricycle drivers for fuel consumption. Several groups of drivers had complained however, that their “credit cards” were “empty” and could not avail of any discounts.

Zarate said Makabayan would continue to challenge Aquino to let go of items in his Special Purpose Funds, worth around P 950 billion, which the bloc insisted was ‘presidential pork’.

He mentioned such items as school building fund worth P1-billion as forms of ‘patronage politics’.  “Since this fund is under the discretion of Aquino, he can use this fund to support or reward allies.”

The group also questioned the P 1-billion risk management fund, which they learned is a buffer for expenses incurred in private-public partnership.

Zarate said the huge amount of money controlled by Aquino “made the Congress power over the purse a myth,” referring to the check-and-balance mechanism between the legislative and the executive on the use of the national budget.

The solon said they are pursuing studies and legislation to reform the budget so there would be more itemized-budgeting and “prudent spending”. (Tyrone A. Velez, davaotoday.com)