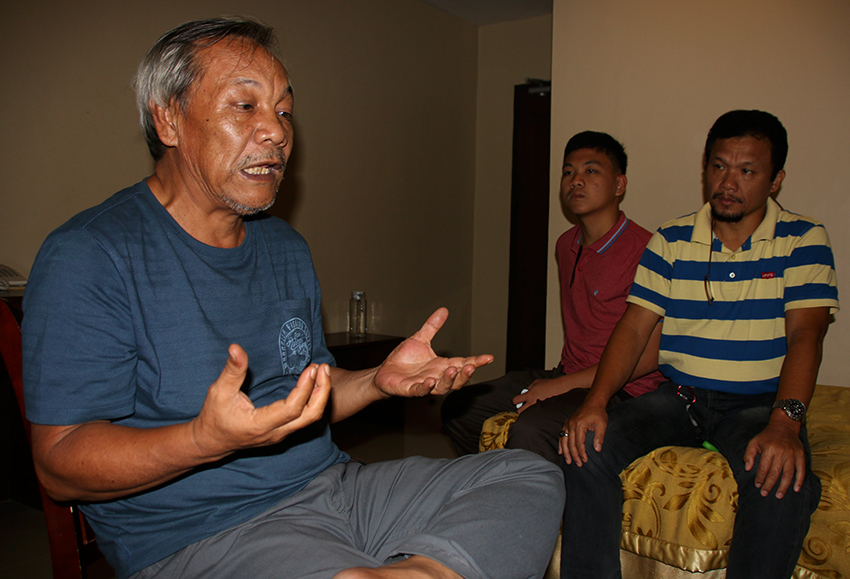 RUINED. Zainoding Dimalutang (left), chair of the Federation of MNLF cooperatives says more than P20-million worth of their livelihood and income-generating projects operating in Marawi were completely devastated by the ongoing crisis. With him is Shariff Ali Ambor (right), a member of the board of the cooperative federation. (Alex D. Lopez/davaotoday.com)

COTABATO CITY, Philippines – More than P20 million worth of livelihood projects of a federation of cooperatives of the Moro National Liberation Front were completely damaged as the air and ground assaults by the government against the ISIS-linked Maute Group in Marawi continue.

The projects were funded by the Office of the Presidential Adviser on the Peace Process, through its Payapa at Masaganang Pamayanan program and part of the livelihood component of the peace agreement between the government and the MNLF, said Zainoding A. Dimalutang, the deputy chief of the Zone of Peace 2 of the MNFL area in Lanao del Sur.

“Most of these projects were received after the sealed peace agreement between the government and the MNLF,” Dimalutang said.

Dimalutang, who chairs the federation of 39 MNLF cooperatives, is based in Camp Jabal Nur in the town of Madamba, Lanao del Sur.

He said most of the livelihood projects they operated in Marawi were part of the first and second funding released by the government to the cooperatives.

“In order to sustain our projects, we decided to venture into more profitable businesses in Marawi. At that time, the business center in Lanao del Sur is in Marawi,” he added.

From 2012 until May this year, the federation was operating a number of businesses in Marawi, to include a motorcycle parts store, rice trading and hauling, electronics store, grocery store and a bakery.

The federation, Dimalutang said, also offered for rent some of its farm tools and equipment to rice and vegetable farmers in Marawi.

“That attack (the Maute) destroyed all of our livelihood projects, including the stores, farm tools, equipment and the hauler truck. It’s painful because these projects are really generating income to the federation and to our members,” he lamented.

The federation, he added, is presently in quandary on how to recover the losses.

“It will be very difficult. We received reports that some of our stores were burned down, the equipment destroyed,” he said.

The Marawi siege that broke out last May 23 has displaced more than 200,000 residents of Marawi and ruined most of the houses, buildings and other structures in the city, especially in areas where fighting was intense since day one of the crisis.

Dimalutang said the P20-billion proposal for the rehabilitation of Marawi is not enough.

“Just consider the number of houses, buildings and other properties devastated by the war. The amount is not enough to rehabilitate Marawi,” he stressed.

President Rodrigo Duterte, during his visit at the evacuation center in Buru-un, Iligan City last month said the government will prioritize the rehabilitation of Marawi and will provide P20-billion funding for
the purpose.

Dimalutang also called on the government to prioritize the damaged sources of income of the people of Marawi.

“Damaged livelihood projects provided by the government to various groups must be investigated and be given support for recovery,” he said.

He also asked the government to give specific attention, through OPAPP to help MNLF groups in the area recover from the ruins of the war.

Dimalutang also expressed disgust over the leaders who led the destruction of Marawi, saying that their cause is manipulated that only brought hardships to the people.

The manipulation, he explained, is being done by outside groups that force their concepts of faith and belief to the Maute members.

“I believe of the CIA (Central Intelligence Agency) factor in this crisis. They use this local group and wanted to inflict damages to Marawi, just like what they did in other countries in the Middle East,” Dimalutang said.

He also criticized the Maute Group of causing the miseries of the civilians in Marawi.

“During our time, when we fought the government, we always see to it that the civilians and their communities that we consider as our mass base is not affected by war,” he pointed out.

The extremism and the cause that the Maute members espoused, he added, are meant to make the civilians suffer.

“They (Maute) just want to be recognized by the ISIS. What they want is only accreditation at the expense of the thousands of the people and the damages to their homes, lives, properties and sources for living,” Dimalutang said.

Politics and drugs also added fuel to the crisis, he added.

“There were politicians who were monitored here in Marawi weeks before the siege. We were informed that they were discussing on the ouster of President Duterte,” Dimalutang said.

He refused to name the politicians he monitored in Marawi weeks before the siege.

“The military offensives, especially the airstrikes must be stopped to pave the way for the peaceful resolution of the crisis,” he said.

Local and religious leaders can handle the situation he said if allowed by the government to proceed to negotiate the leaders of the Maute.

The MNLF and the Moro Islamic Liberation Front can also play important role in resolving the crisis, he added. (davaotoday.com)