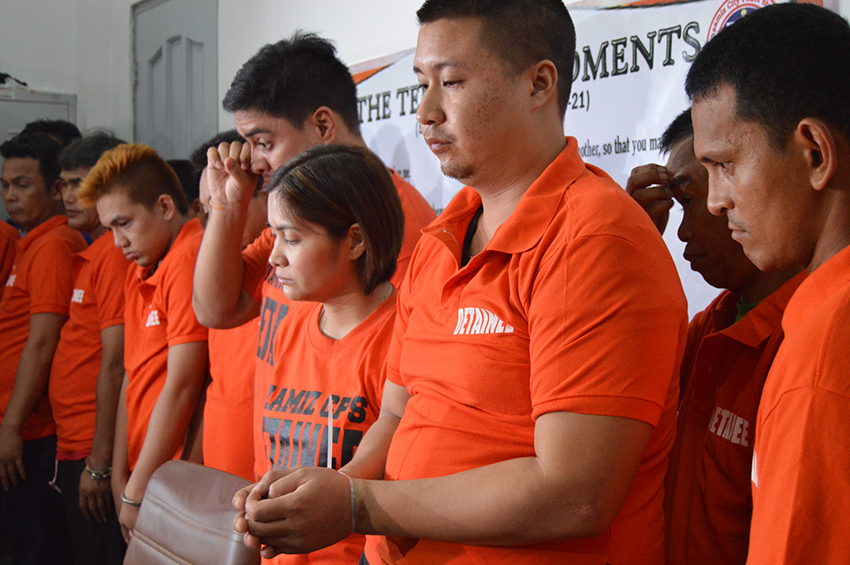 BUSTED. Vice Mayor Nova Princess Parojinog, her brother Reynaldo, Jr., and others were supposed to be presented to the media in a press briefing, Sunday afternoon. The presentation did not push through as the, but the CIDG, who was the applicant of the search warrant did not show up. (Divina M. Suson/davaotoday.com)

CAGAYAN DE ORO CITY, Philippines – Ozamiz City Vice Mayor Nova Princess Parojinog urged President Rodrigo Duterte to investigate the series of raids carried out by the joint team of police and the Criminal Investigation and Detection Group (CIDG) agents in the family’s residences that led to the death of her parents and 13 others on Sunday.

Killed by law enforcers in what was supposed to be a simple police operation were Reynaldo “Aldong” Parojinog Sr., his wife Susan, his sister Mona, and brother Octavio Jr. Eleven others also lost their lives during the raid.

“I am asking President Duterte to investigate this​, ​he should look at it thoroughly. He knows my father,” Parojinog said, referring to Reynaldo Sr., the late mayor of Ozamiz.

In previous interviews, the younger Parojinog said the suspected illegal drugs, firearms and other items found in their homes were all “planted.”

She added it was the law enforcers who first shot the security personnel of her father, contrary to the statement of the police who said the raiding team opened fire in response to the shots fired from the elder Parojinog’s house in Barangay Baybay San Roque early Sunday morning.

“Nobody fired shots from our end,” she said in an interview.

The police officers were trying to serve a search warrant to the Parojinogs when the shooting happened.

“The serving PNP personnel were met with a volley of fire from their (Parojinogs’) security, prompting the [police] to retaliate,” said Chief Superintendent Timoteo Pacleb, Philippine National Police-10 (PNP-10) regional director in a statement.

The vice mayor also complained of the removal of the hard drives of the closed-circuit television (CCTV) cameras around her and her father’s houses.

“If there was no irregularity, why did not remove the hard disks of our CCTV?” she said.

Chief Inspector Jovie Espenido, Ozamiz City police director, said the elder Parojinog was one of the government’s high-value targets and had been named by Duterte as among the politicians involved in “narcopolitics,” although the former mayor had repeatedly denied this accusation.

In one of the interviews a few months back, Reynaldo Sr. claimed that Duterte himself absolved him of the allegation when they met in Malacanang during a meeting with mayors.

“When he saw me, he approached me and said, ‘Wala man kay labot’ (you’re not a part of it),” he said, in reference to the “matrix” of those involved in the drug trade in the country that included politicians and high-ranking government officials that Duterte presented to the media a few months back.

The former mayor even asked Duterte to have his name and the vice mayor’s names removed from the matrix.
Espenido said there are still high-value targets in Ozamiz and urged them to come clean.

“I hope they will voluntarily stop their illegal activities dahil wala tayong sinasanto (we have no sacred cows),” he said in a television interview just recently.

Meanwhile, lawyer Lawrence Carim, a member of the Parojinogs’ legal team, has complained that he was barred from entering the PNP headquarters at Camp Crame to accompany the vice mayor and her bother Reynaldo Jr. who were flown in from Ozamiz early Monday morning.

Carim said he was with his clients from Ozamiz to Manila but was denied entry only in Camp Crame.

According to CIDG chief Director Roel Obusan in an interview, the Parojinogs were brought to Metro Manila since the search warrants served by the local police were issued by a Regional Trial Court judge in Quezon City.

Carim said the Parojinog siblings have feared for their lives if they are transported without the presence of their lawyer.

He added they should stay in Ozamiz because that’s where the alleged crime was committed.

The venue of the hearing of the case, he said, is “jurisdictional”​. ​(davaotoday.com)