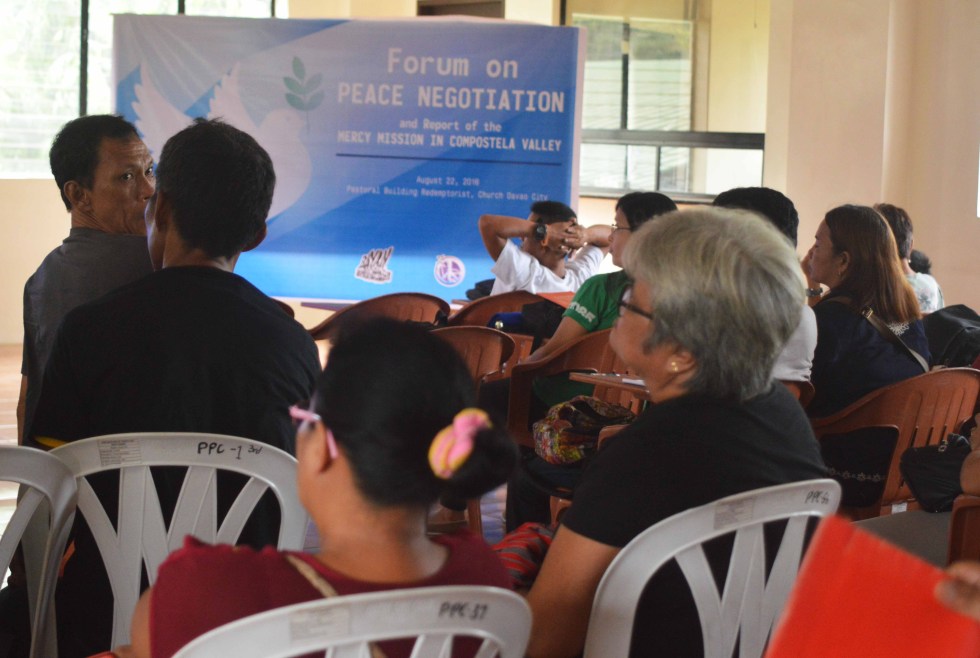 PEACE TALKS 101. Multisectoral groups attend a forum on the resumption of the peace negotiations at the Pastor Building inside the Redemptorist Church compound in Davao City coinciding with the opening of the formal talks between the government and the National Democratic Front of the Philippines on Monday, August 22, 2016. (Medel V. Hernani/davaotoday.com)

DAVAO CITY—  Coinciding with the resumption of the formal talks between the government and the National Democratic Front, progressive group, Bagong Alyansang Makabayan came up with Peace Talks 101, a presentation that discusses the peace negotiations in a simple way.

Sheena Duazo, spokesperson of Bayan Southern Mindanao Region, said that they will use the presentation during their talks in communities in Davao region in a bid to educate the public and enjoin them in supporting the peace process.

She said that it is their “contribution” to the peace process that formally resumed on Monday, August 22.

“We made this presentation for the public to easily understand the GRP-NDF peace talks,” Duazo told Davao Today in an interview during a forum coinciding the launching of the lecture guide at the Pastoral Building of Redemptorist Church here Monday. Exodus for Justice and Peace convener Pastor Jurie Jaime is one of the lecturers during the forum on the peace negotiations held at the Pastoral Building of the Redemptorist Church in Davao City on Monday, August 22, 2016. (Medel V. Hernani/davaotoday.com)

The Peace Talks 101 tackles topics about the Communist Party of the Philippines, the New People’s Army, political prisoners and why the public should support the peace process.

“It also explains the different types of ceasefire and the substantive agenda that will be tackled during the peace negotiations,” she said.

Duazo said they will also hold lectures, symposiums, and group discussions about the peace process.  She said that this is a nationwide campaign of Bayan.

The GRP and NDFP formally opened peace talks August 22, 2016 up to August 28 at Oslo, Norway in attempt to end the armed conflict between the two parties. (davaotoday.com)