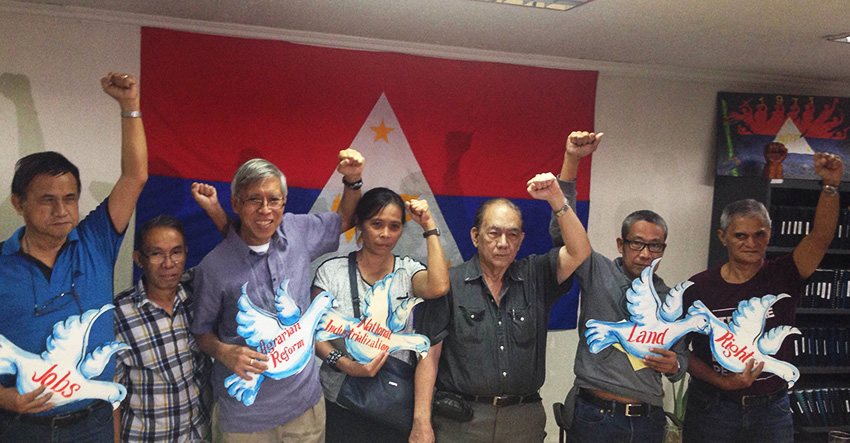 DAVAO CITY, Philippines – Peace consultants of the National Democratic Front said there is a need to reverse government policies to enact national industrialization, one of the issues of the comprehensive agreement on socioeconomic reform agenda that will be tackled by both the government and the NDF in the second round of talks next week.

Adel Silva, a labor leader and one of the peace consultants of the NDF said national industrialization is needed to resolve unemployment, contractualization and forced migration.

In a press briefing last Saturday at the NDF Joint Monitoring Committee Office at the Immaculate Conception Multipurpose Center in Cubao, Quezon City on September 23, Silva said the P454 to P491 declared minimum wage for the National Capital Region is only enjoyed by a few.

Based on the figures of the National Wages and Productivity Commission, as of August 3, 2016, the lowest minimum wage for non-plantation workers is P227 in Region 1, while the highest is P454 in NCR.

Silva said the low wage is caused by the lack of jobs in the country. He said low salary also forces workers to accept contractualization and to work abroad.

“The workers are desperate. They are either forced to work abroad, accept contractualization or accept jobs with low wages. There is no solution for this, but for the country to industrialize,” said Silva, who is a member of the NDFP’s working group on socioeconomic reforms.

Silva said implementing a national industrialization would enable the country to produce industrial goods by itself without depending on other countries or without exporting labor.

“We need to reverse the situation that has long plagued our country. This was also pushed by the powers that dominate the country and does not allow us to industrialize because they want us to be a market of their finished products, or a market for their excess capital and to maintain our economy backward and dependent on their advanced economies,” Silva said.

Prof. Ed Villegas, also a consultant for the NDFP said the country has no heavy machine industry and still depends on export.

“But we can do that because we have the natural resources. We are a top producer of gold, copper, nickel and the richest in Asia in metallic and non-metallic minerals,” Villegas said.

“Why is it the foreign countries are the ones controlling our resources?” he said.

He said the Mining Act of 1995 should be repealed and stressed that the state “should take control of the mining industry” and not the foreign mining companies.

Villegas also said the country’s resources is also sufficient to raise its own food industry.

He said with the dictates of the World Trade Organization, the country is now importing rice and other food products that can be produced in the country with the mechanization of agriculture.

He said if the agriculture sector in the country would succeed in mechanization, food productivity will improve and in return, it will make food prices cheaper.

“We will be sufficient in food and the food prices will go down. Instead of importing rice and other products, we can have our own food and beverage industry,” Villegas said.

The NDF has already exchanged a proposed “framework and outline” for the Comprehensive Agreement on Social and Economic Reforms, which will be tackled in Oslo, Norway on October 6-10.

NDF consultant and RWC-SER member Randall Echanis, in a statement said they anticipate a “spirited and interesting discussion on the frameworks, and at the same time expect it to be a bit contentious.”

However, he said, addressing the roots of the armed conflict and the interest of the people should be the utmost importance.

According to the NDFP’s proposal the main CASER objectives are to:

Echanis added that under the NDFP’s proposal “the responsibility for implementation of the agreement shall be joint and separate.” (davaotoday.com)