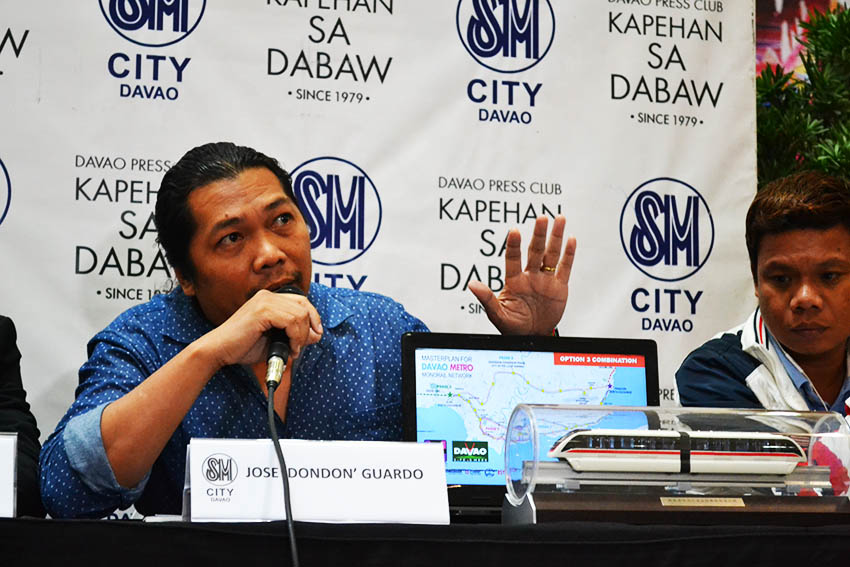 MONORAIL IN DAVAO-Jose L. Guardo Jr., spokesperson of Philtram, presents the proposed monorail project that will be constructed in Davao City during the Kapehan sa Dabaw at SM Ecoland on Monday , Jan.23. ( Christine Megrino, davaotoday.com)

DAVAO CITY, Philippines — The local government and a Filipino-Chinese-Canadian Transport Investment Group known as Philtram are slated to sign a Memorandum of Understanding on February this year for the monorail project in this city.

Guardo said the monorail that will be put up in this city will be cheaper than its Manila counterparts, Metro Rail Transit and Light Rail Transit, to cost at $40 million per kilometer including the station, signal system and rolling stocks.

He said the Chinese monorail could accommodate 1,000 passengers, which will have two to eight coaches inside.

The project will be implemented in four phases. On its first phase, Station 1 will start at R. Castillo and J.P Laurel Avenue, station 2 will be at SM Lanang, Station 3 will be located at Southern Philippine Medical Center; Station 4 will be at Abreeza, Ayala Mall, Station 5 will be put at Gaisano Mall of Davao and the central station which will be named as Duterte Central Station will be located at Roxas Avenue.

On its second phase, the monorail project will be put up at Quirino Avenue going to Bankerohan as Station 2 then straight to NCCC Mall of Davao as Station 3, then Station 4 at the intersection of General Douglas Mac Arthur Highway and Quimpo Boulevard Diversion Road, Station 5 will be at SM Ecoland, Station 6 will be put up at Davao City Overland Transport Terminal then Station 7 will be either be in Land Transportation Office or Davao City Recreation Center and then back to the Central Station at Roxas Avenue.

On the third phase of the project, it will start at the intersection of Douglas MacArthur Highway and Quimpo Boulevard, the Station 1 will be put up at Matina intersection going to Bangkal as the Station 2 then to Ulas as Station 3 up to the proposed South Bus Terminal project in Toril.

Philtram has yet to finalize the fourth phase of the project but it will be put up in the northern area of the city up to the proposed Northern Bus Terminal Project in Panacan area.

Guardo said the monorail would be made up of rubber tires, which will make it easier to put up in the target route. The stations will have stores and will offer free Wifi access to the public.

Eduardo Geguerra, operation manager head of Philtram said if the project will push through, they will immediately conduct a feasibility study that will run up to four to six months, and less than two years for the pre-engineering.

“People living outside the city can leave their vehicles in parking buildings so that they can stroll the city using the monorail,” he said. (davaotoday.com)