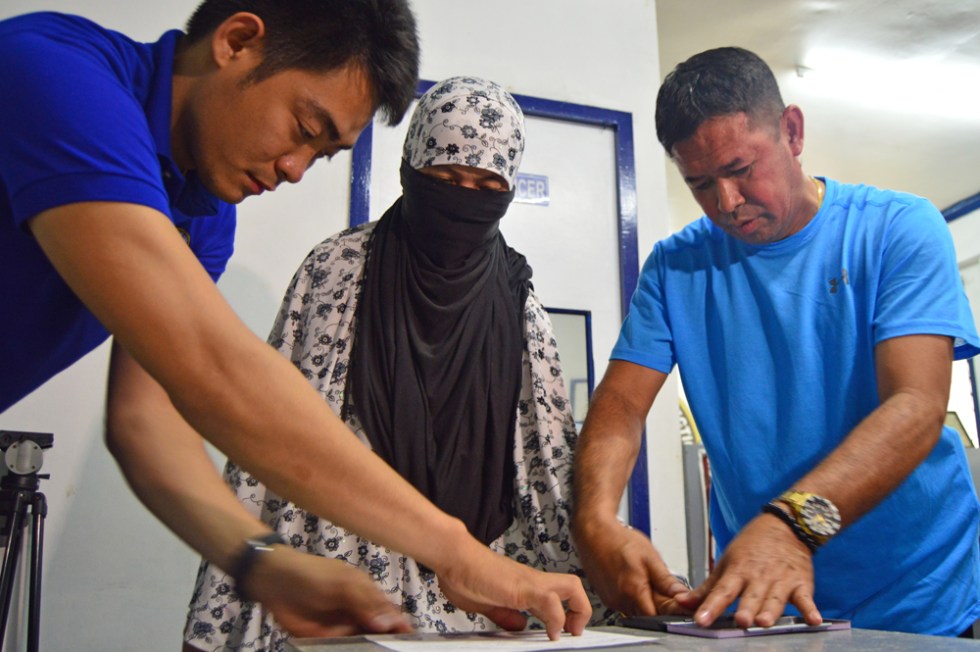 Criminal Investigation and Detection Group (CIDG) personnel assist Juromee Dongon as she was being fingerprinted as part of the booking procedure, on Sunday, Feb. 25. Dongon, along with four other persons, were arrested following separate police operations on the same day. Seized from their possession were various firearms and ammunition, electronic gadgets, and other items believed to be parts in making improvised bombs. (Jigger J. Jerusalem/davaotoday.com)

CAGAYAN DE ORO CITY, Philippines – The arrest on Sunday of the wife of a slain terrorist leader has weakened the terror group Jemaah Islamiyah (JI), but authorities in the region said they have maintained their preparedness to thwart any possible attacks.

Arrested was Juromee Dongon, said to be the wife of a JI leader in Southeast Asia, the Malaysian national Zulkili bin Hir, alias “Marwan,” who was killed in an operation that also claimed the lives of 44 officers of the Philippine National Police–Special Action Force (PNP-SAF) and a handful of armed rebels and civilians in a village in Mamasapano, Maguindanao, on January 25, 2015.

Dongon was apprehended with SPO4 Andy Atta and his wife Lorilie Dongon-Atta, Romeo Dongon, and Norein Santos, in two separate raids in Tubod and Baroy towns in Lanao del Norte on Sunday, February 25.

Seized from them were various firearms and ammunition, laptops, cellphones, and materials possibly used in assembling improvised explosive devices (IED).

The joint operations were carried out by intelligence, police and military operatives based on search warrants against the personalities.

The death of bin Hir and Dongon’s arrest had struck a blow to the JI and may have weakened the group, said Supt. Lemuel Gonda, regional police spokesperson. But, he added, they are not taking any chances since the remaining members might be regrouping following the loss of their key leaders.

Gonda described Dongon as a “high-profile” personality who played a vital role in the operations of the JI even after the death of her husband.

Dongon’s involvements in JI are key to the organization, which included access to financial sources, networking with their associates and other terror groups, among others, Gonda said.

Bin Hir was Dongon’s second husband. She was first married to Khadaffy Janjanlani, a leader of the Abu Sayyaf who was killed in an encounter with the military in 2006.

Dongon denied being a terrorist. “I only became controversial because of my husband. So take out Khadaffy and Marwan from my life, I am just Juromee,” she told reporters while detained at the Criminal Investigation and Detection Group (CIDG) regional headquarters in Cagayan de Oro on Sunday.

Although the strength of the terrorist group might have been weakened, Gonda said, the Armed Forces and law enforcement agencies are still on high alert as the terrorists have reportedly been slowly recruiting new members, especially their relatives.

“Based on reports, they (JI) are evolving, they are getting in touch with other [terror] groups,” Gonda said.

It was also possible, he added, that Dongon knows how to assemble an IED since bin Hir was a bomb-making expert.

Dongon is the sister of Abu Sayyaf member Reneer Lou Dongon, who was arrested in Bohol last year and is said to be the leader of Khilafa Islamiyah Mindanao, the group that carried out a bombing in Cagayan de Oro in 2013.

Dongon’s brother was married to Supt. Maria Christina Nobleza, who was the deputy regional chief of Davao crime laboratory. Both were arrested in Bohol. (davaotoday.com)