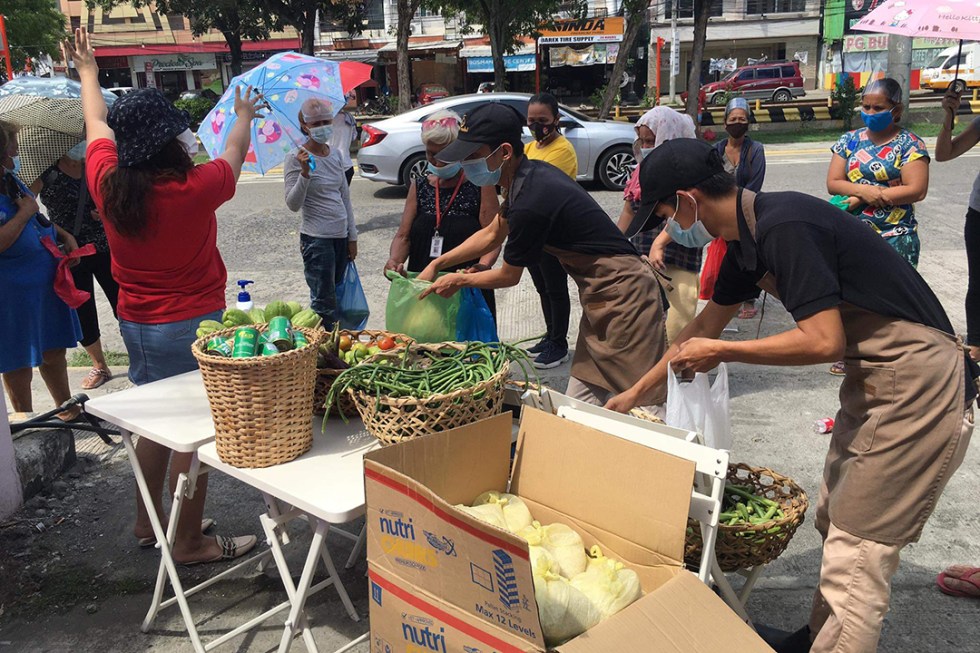 COMMUNITY PANTRY. Davaoenos line up to get their fair share of fresh vegetables, canned goods, and other food items from a community pantry setup along Roxas Avenue. The initiative was inspired by a similar effort started in Maginhawa, Quezon City by Anna Patricia Non. (Lucelle Bonzo/davaotoday.com)

DAVAO CITY, Philippines – The mushrooming of community pantries in the country mirrors the ‘’phenomenon of hunger and poverty’’ that has intensified because of this global health crisis which devastates the nation’s economy.

According to sociology Professor Arnold Alamon who teaches at Mindanao State University-Iligan Institute of Technology, this wave of community pantries has emerged because of the initiative of the middle-class people in different parts of the country who also feel the brunt of this economic crisis and “problematic health care of the government.”

Alamon said these community efforts come with different forms and do not necessarily involve any political affiliations because these people who started this pantry have realized that their situation is no different from the other sectors of the society.

He said the sprout of community pantries has become an indicator of poor government action even in communities located in the economic middle. It also has exposed the reality of the ‘’phenomenon of hunger and poverty’’ when people queue to avail themselves of free food.

“So, it turns out the even in the urban places and semi-urban center in the provinces, there are those who are in need. They keep their silence because they could not go out and yet they are affected in this worst economic decline,’’ Alamon said.

The Philippine Sociological Society Emergent Agency Research Team conducted an initial study monitoring about 44 community pantries set up by individuals and organizations beginning April 17 to April 18 inspired first by Ana Patricia Non with instruction written ‘’Magbigay ayon sa kakayahan. Kumuha batay sa pangangailangan (Give according to your ability. Take according to your need.).’’ on April 14, 2021 on a street corner along Maginhawa St., Teachers Village, Quezon City.

The establishment of community pantries can be a gauge for solidifying public opinion on the inadequacy of government response to the pandemic on two fronts: providing economic subsidy and aid for those greatly affected by the lockdown and the lack of an appropriate and comprehensive health response to the pandemic, according to the study.

“These community pantries resonate with the public’s dire needs and brewing discontent in the context of a worsening economic and health care situation,” the study concludes.

Inspired by the Maginhawa community pantry, local coffee shop owner Mary Ann Medina put up a pantry in front of her shop along Roxas Avenue to encourage people about the idea of sharing and community effort. She spent from her own pocket to stock the pantry with rice, canned goods, vegetables and some root crops to serve people living in her neighborhood and some ‘’pedicab’’ drivers plying their route in the area.

She placed tarpaulins to explain the community pantry concept and remind the people queuing to observe COVID-19 health protocol such as maintaining physical distance.

“Actually, I thought of this even when this is in Roxas because there are houses at the back of our coffee shop whose situation is pitiable, so, they are the ones who could avail first. In this time, there are those who are really in need. So, I tried to start this and the goal is influence others to begin their own community pantries, Medina told Davao Today.

As Medina posted on social media the pantry she set up, many residents have reached out to her and donated cash and in-kind while others volunteered as crew. Some organizations even donated animal foods for pet owners.

Medina also received messages from people informing her that they would install community pantries in their areas too. Before she started her pantry in Roxas, community pantries have started in Matina, Ecoland, Agdao and inside the Maa City Jail.
“I think no one has set it up here in Davao proper because no one has started it. So, if you don’t initiate, no one will follow. So, I thought this needs push, awareness and exposure to show that we can do this and it is not only those in Luzon who can,” she said.

Since lockdown last year, Medina donated to the House of Hope at Southern Philippine Medical Center (SMPC), in her chosen communities and for some indigenous people of Davao.

‘’Sure meal’’ for uncertain ones
Since the pandemic, Mark and many pedicab drivers have been struggling to meet their daily needs. The temporary closure of two universities because of the prohibition of face-to-face classes and the suspension of the night market reduced their income as passengers have declined.

When the Roxas community pantry started, Mark availed some rice and vegetables for his family’s meal and spared him P80 from his morning income.

“I haven’t expected this kind of help would come to us in this time of our dire need because earning has become so difficult now. This (community pantry) helps us a lot to get by in our meal today, Mark told Davao Today on Monday morning while he was lining up at the pantry.

For Larisa who received some food packs from her barangay and a small amount of money for the cash for work program of the city government during lockdown, the community pantry at Roxas is another help for her family ensure the day’s meal.

Since COVID-19, her family has been struggling a lot because her husband is just a part-time delivery driver and she has stopped selling barbeque for now.

“I didn’t expect that the news we saw on TV about this (community pantry) would be in Davao, too. Since the lockdown, we (vendors) along Roxas do not have stable income. What the City Hall gave helped, but it was not enough,” Larisa said.

Larisa said the community pantry is ‘’an act of unimaginable kindness’’ of few people who have chosen to give even in simple means.

“Not everyone could think of helping others with this crisis now. We are so grateful with this, Ma’am, however simple this (community pantry) has offered, it has solved the uncertainty of our next meal. I have something to cook for my children now because I am not sure if my husband would come home with money to buy food. This is such a great help, Ma’am. I hope this will last a bit longer,”she said.

Davao artist and community kitchen volunteer Angely Chi said helping each other is not new because it is natural for Filipinos to show kindness and compassion to people in need.

Chi considered the community pantry as a ‘’collective effort’’ in the community that sees the need to act in the absence of adequate support from the government during lockdown in this time of pandemic and even in times of calamities.

“For what I can see, this is a reaction to the lack of support for food in the community and these collective efforts are multiplying because the essential need of the people which is food is lacking,” she said.

Chi and her organization, Art Relief Mobile Kitchen, have been serving hot meals to barangays affected in the recent flooding and fire in the city. She is also part of the group who set up the Matina community pantry.