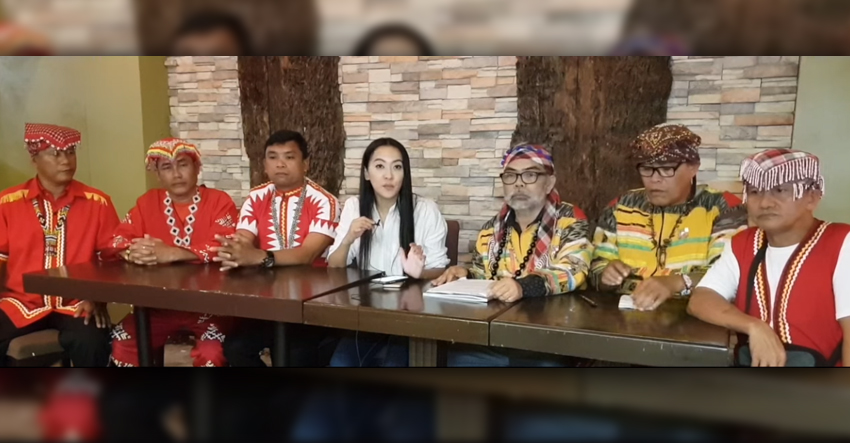 DAVAO CITY, Philippines — The Kahugpungan sa Lumadnong Organisasyon-Caraga (Kasalo-Caraga), a progressive group in Caraga, said, on Wednesday, that the Lumad tribal leader who appeared in a video interview by Communications Assistant Secretary Mocha Uson to discuss the spate of killings in Mindanao was implicated in the deaths of Lumad leaders in Lianga, Surigao del Sur province back in 2015.

Kasalo-Caraga’s Chaiperson Femia Cullamat identified the Lumad leader as Marcos Bocales who was one of the leaders of the Magahat-Bagani paramilitary group in Lianga, Surigao del Sur province tagged in the September 2015 killings of Emerito Samarca, the executive director of the Alternative Learning Center for Agricultural and Livelihood Development (Alcadev); Dionel Campos, chair of the Maluhutayong Pakigbisog Alang Sumusunod (Mapasu); and Manobo Datu Juvello Sinzo.

According to Cullamat, Bocales was among those charged with multiple murder along with Marcial Belandrez and Kalpet Egua, both were alleged Magahat-Bagani leaders.

“Bocales’s group, the Magahat-Bagani, is known to be a bandit group that connived with the Army’s 75th Infantry Battalion and is responsible for the string of human rights abuses against the Lumad, and farmers in Agusan and Surigao,” she said.

Bocales appeared in Uson’s video blog interview together with other Lumad representatives from Mindanao in a bid to counter the so-called Left’s militarization claim in Mindanao. In the said video blog, which was uploaded in Uson’s Facebook page “Mocha Uson Blog,” they blamed the Communist Party of the Philippines and its armed-wing, the New People’s Army for Lumad killings in Mindanao.

Uson’s video interview with Lumad leaders became the subject of her HotSpot column entitled “NPA killing Lumads?” published in the Philippine Star on September 25. The topic of her opinion piece came from the narrative interview she conducted with Marcos Bocales, Ramon Bayaan, and Joel Unad of Mindanao Indigenous People’s Conference For Peace and Development.

She also blasted Uson for parading Bocales as “datu” or a tribal leader. While he was considered a Lumad, Bocales has never been considered by the Lumad in Caraga as a datu.

“Bocales is not a legitimate tribal leader,” Cullamat said, adding that he doesn’t govern a tribal community of any sort. “To be called a datu, a tribe should select him as their leader. But in the case of Bocales, he is not a Manobo tribal leader,” she said.

For his part, Kerlan Fanagel Chairperson of PASAKA Confederation of Lumad Organizations in Southern Mindanao called Uson’s interview as a “sham meant to malign the efforts of genuine tribal leaders who fought to advance the rights of Lumad.”

Fanagel said Unad was the chair of MIPCPD, an organization created by the Army’s 10th Infantry Division under the auspices of the Eastern Mindanao Command back in 2006 at the height of the Arroyo administration’s counter-insurgency program Oplan Bantay Laya 2.

“He is obviously a leader of the Alamara paramilitary group, not a tribal leader but a tribal dealer for a multinational corporation especially mining and plantations. Joel Unad’s MIPCPD office is located inside the headquarters of the EastMincom and 10th Infantry Division. Simple saying, Joel Unad is a spokesperson of the AFP. All you heard from his mouth is scripted and dictated by the military,” Fanagel said.

He went on to describe Ramon Bayaan as “an opportunist and a traitor to the Lumad of North Cotabato. He is under the same AFP’s controlled, organized and armed paramilitary group of Supreme Tribal Council for Peace and Development (STCP).

“So what do you expect from the words coming from their mouth? It’s an old music of red tagging, and these tribal dealers have no credibility on the ground at all. They have no moral ground so to speak,” Fanagel said. (davaotoday.com)