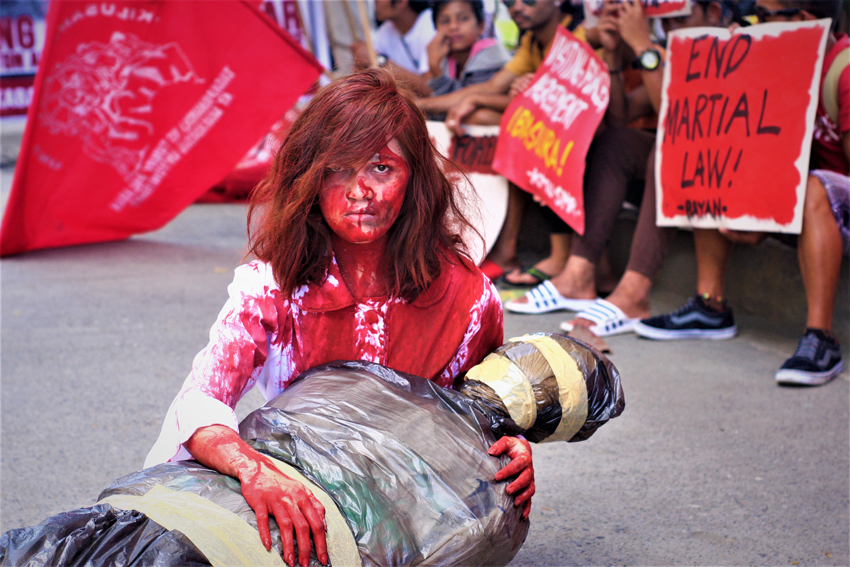 KILLINGS CONTINUE.A portrait of injustice displayed by progressive organizations in Davao City as they commemorate on Monday, December 10, 2018, the International Human Rights Day. The group led by Karapatan-SMR said a high number of human rights violations have been committed by state forces in the region in pursuit of their intensified operations against the communist groups. (Kath M. Cortez/davaotoday.com)

Activists led by Karapatan Southern Mindanao staged a protest Monday morning in Davao’s freedom park to express its opposition to the proposed extension of Martial Law in Mindanao.

Jay Apiag, spokesperson of Karapatan told media that this year’s commemoration “defy two Dutertes who are implementing a bloody rule” against the people.

“One is the President in Malacanang, whose declaration of Martial Law has resulted in arrests, attacks, and killings of human rights defenders. The other is Davao City Mayor Sara Duterte who is showing her brand of tyranny in the city, and bullying critics of her father” said Apaig.

The group displayed a portrait of bloody women hugging three dead bodies wrapped in black bags and masking tape showing the recent situation of human rights violations in the region.

Karapatan in their data told Apiag, showed that the region has the worse number of political killings. The first half of 2018 has recorded 18 politically-motivated killings in Southern Mindanao. This is about 22% of the 83 documented political killings that happened under Duterte’s reign starting July 1, 2016.

Apiag said that “what makes it alarming is the number of peasant and lumad victims in Davao region”.

Their data totaled 65 peasant victims and 12 lumad victims of political killings while 116 peasants and 16 lumads are arrested in the in just 7 months.

The encampment in barangay centers, conduct surveys among civilians and village patrols are the trend of the violations under Oplan Kapayapaan said Apaig.

The Kilusang Magbubukid ng Pilipinas-Southern Mindanao Region noted that five battalions are deployed in Compostela Valley, the 25th, 66th, 71st, 46th, and the 60th IB. These units have conducted intelligence gathering, harassment, and intimidation among residents in Laak, Monkayo, Montevista, Compostela, New Bataan, Maco, Mawab, Pantukan, Maragusan, Mabini, and Nabunturan. They are suspected in the killings of farmers and Lumads in these areas. Deployments are more pronounced in Compostela Valley and Davao del Norte in mining and agri-business ventures in the name of securing investors.

Arnado said that the imposition of Martial Law in Mindanao since May 23, 2017, the attacks on farmers have intensified.

“Since 2018, soldiers launched a series of campaigns similar to the urban areas “tokhang”, where farmers and Lumads especially activists are profiled and intimidated to sign “surrender papers” as New People’s Army supporters or members. Resistance to this scheme has resulted to intensified harassment and in some instances, murder.” said Pedro Arnado, Chairperson, Kilusang Magbubukid ng Pilipinas -SMR

Karapatan also documented a total of 7,517 families or 55,742 persons displaced due to intensified military operations including encampment, harassment, aerial bombings and mortar shelling in Lumad communities.

In an interview with Datu Tungig Mansumuy-at, council member of Salupongan Ta Tanu Igkanugon, he said that since the declaration of Martial Law, every barangay in Talaingod is deployed with at least ten elements of the Alarama to keep “peace and order”.

Such situation forced another evacuation on February 14 from eight sitios, led by Datu Mansumuy-at. There are 66 families of 330 persons taking refuge in evacuation centers in Tagum City. The sitios affected are Sitio Nalubas, Lasakan, Palisan, Tibukag, and Bulo.

He added that aside from the evacuation, massive attacks against their alternative schools happened that led to the forcible closure of Salugpungan schools in Talaingod.

The Save Our Schools reported that 57 schools out of 226 Lumad community schools in the region were closed over the past 12 months which affected 2,975 students. 47 of these cases came as a result of the disruption of classes. Under Martial Law, about one-third of the volunteer teachers of Salugpongan Community Learning Center, or 64 out of 100 volunteer teachers, remained.

Rius Valle said the attacks on schools, the encampment, the red-tagging of schools, are rampant. They contradict local and international laws covering the right of children that prohibit the use of public infrastructure such as schools, hospitals, and other health units for military purposes. The military has grossly violated these laws as they are hell-bent on disrupting the Lumad schools.

Since the beginning of the strike, a member of the union, Danny Boy Bautista was killed last October 31, 2018, and two members survived assassination attempts during the course of the dispute.

The group is also accused of having links with the communist party and was tagged as members of the New People’s Army.

Currently, they are in Manila and put up strike camps in Mendiola to demand DOLE Secretary Bello to implement the DOLE Resolution which recognizes us as regular employees of Sumifru and compels the latter to sit with us in the negotiating table.

“We are here in Manila because we are being killed in Mindanao for claiming our rights. My family is being targeted. Ours is a valid and just strike that only called on Sumifru to comply with a Supreme Court order. This pattern of harassment and intimidation is meant to shut us up, but we will never do that. We will continue fighting,” told Dizon. (davaotoday.com)