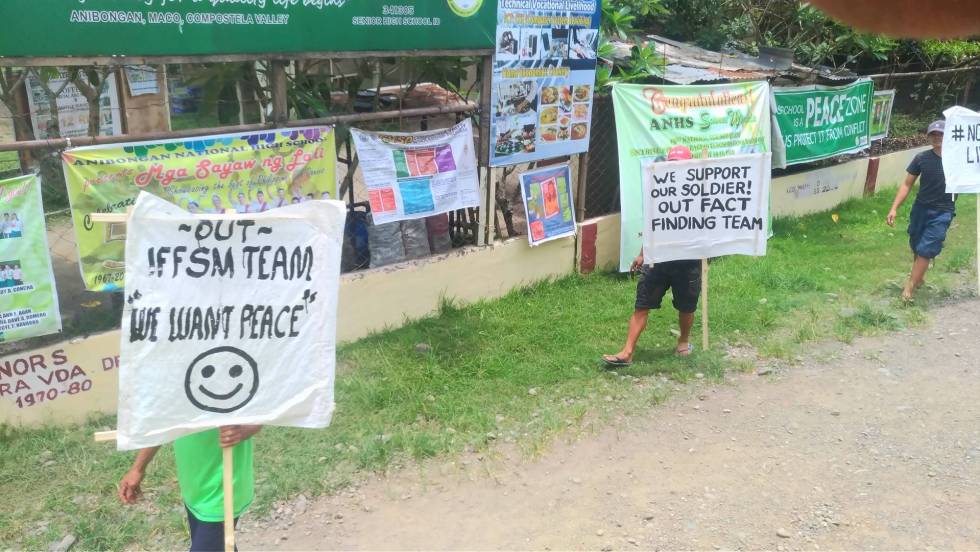 The fact-finding mission was welcomed by a “peace rally” of a few people as they arrived in Maco. The placards bear messages saying “We support our soldier.Out Fact-Finding team”. (Mara S. Genotiva/davaotoday.com)

The mission comprised of 200 persons was earlier “welcomed” on their arrival on Friday with streamers calling them to “Stay out”.

The mission, according to the one of the Southern Mindanao mission team leader AnakPawis Representative Ariel Casilao, is investigating the incidents of killings and coercion against farmers committed by the military in Compostela Valley.

But prior to their arrival, the mission was held on a Task Force Tagum checkpoint at 9:30 am Saturday at Apokon, Tagum City.

The TF Tagum demanded all delegates must present their IDs before they will allow the buses to proceed. Mission leaders including ACT Teachers Partylist France Castro and Kilusang Magbubukid ng Pilipinas Chair Danilo Ramos insisted they had to proceed.

The delegation arrived in Maco only to be welcomed by a “peace rally” of a few people and soldiers of the 71st Infantry Battalion holding the buses. The peace rally placards had messages carring “Defend Martial Law. Defend Peace.” and “Out International Fact Finding Solidarity Mission”.

Casilao said they had been tipped earlier by Maco residents of this “peace rally” orchestrated by the 71st IB.

He said these actions orchestrated by the military the past two days has made the mission more insistent to conduct their interviews and documentation of harassments on peasant.

“These are attempts to terrorize the people and disrupt efforts to probe grave rights abuses perpetrated by the AFP against peasant and Lumad communities in Southern Mindanao”.

KMP’s Ramos also said their scheduled visits to areas is proof that the mission is welcomed by farmers. “They clamor for the chance to reveal their ordeals from the Armed Forces of the Philippines in the height of Martial Law in Mindanao.”

“We are certain that such international delegation investigating the truth behind Martial Law is not a welcome sight for the AFP, notably the 10th Infantry Division in Southern Mindanao,” Ramos added.

The mission noted the report from Karapatan that 63 cases of extrajudicial killings took place in Southern Mindanao, as well as cases of illegal arrests and trumped up charges of farmers, threats and coercion.

“It is among the mission’s objectives to document these cases to show the magnitude of rights abuses under martial law,” said Casilao.