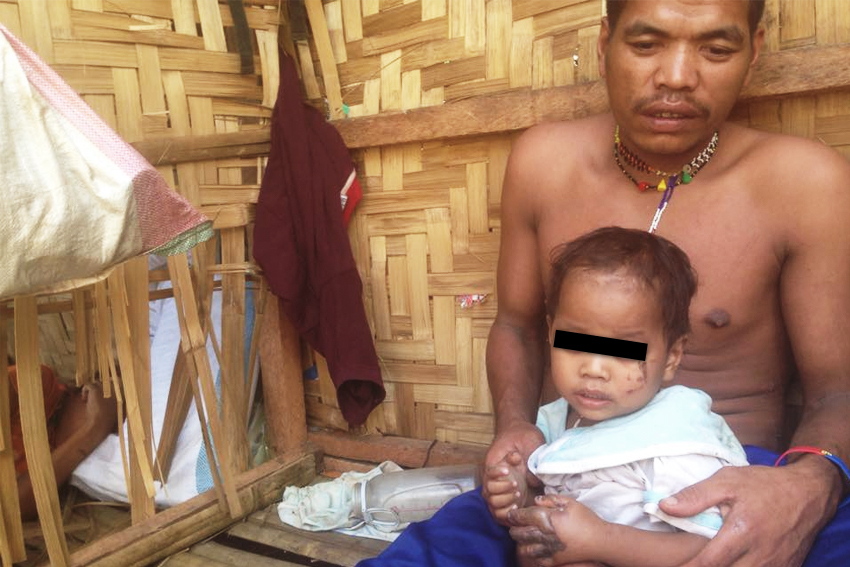 DAVAO CITY — Lumad leaders and rights advocates condemned what was widely believed to be a clear case of politically-motivated arson against human rights victims, ironically a day before the 30th year anniversary of the EDSA People Power on February 25.

At around 2:30 Wednesday, February 24, Lumad Manobo evacuees residing at their temporary shelters at United Church of Christ in the Philippines Haran compound here, woke to a blazing fire. Some students of the nearby Brokenshire College who were sleeping at the church-owned dormitory also woke up to a similar fire.

The Pasaka Confederation of Lumads linked the incident as the latest harassment backed by the military as the Lumad evacuees continued to call for military troops withdrawal in Davao del Norte.

At least five individuals were reportedly hurt including a 2-year old boy who sustained second degree burns on both hands.

Church leaders estimated the damage to their properties and that of the students ranges from P600,000 to P1,000,000.

The Congress of Teachers/Educators for Nationalism and Democracy- UP condemned the burning, saying “We are outraged that this sinister crime against our indigenous brothers and sisters happened a day before the 30th Edsa 1986 Uprising Anniversary. The last Edsa celebration under BS Aquino regime is indeed bloody and sickening.”

The Bureau of Fire ruled that it was a case of arson as they found a torch measuring one meter and a white plastic container with flammable substance near the IP’s (indigenous people) shelter.

Senior Fire Officer 4 Orencio Grado, officer in charge of the Intelligence and Investigation Section Davao City Fire District said that since the  shelter is just a meter away from the wall by the roadside, the suspects could have easily tossed or sprayed gasoline on the shelter and threw a lighted torch to burn it. SFO4 Grado said the damage could be between P400,000 to P500,000.

“The IPs discovered the torch just outside their shelters and a bag with a 1.5 liter bottle filled with gasoline outside the dormitory,” Grado said.

Another white gallon container was also discovered outside the Philippine American Veterans Masonic Memorial Park  just across the compound.

Grado said the gallon smells of gasoline and was probably used by the suspects in burning the evacuation camp.

Authorities also said the perpetrators cut a portion of the barricade made of cyclone wire to enter the property passing on the side of the bushy portion of the compound near Brokenshire Hospital.

Among those who sustained injuries was the family of Loloy Manayab.

Loloy, 30, sustained minor burns on his side. But his two-year old son, Demon had second-degree burns on both hands.

The burning canvas that served as their roof fell on them while they were sleeping inside their makeshift shelter.

Jong Monzon, secretary general of Pasaka Confederation of Lumads, told Davao Today that the Central 911 ambulance took the victims to SPMC together with a volunteer medical staff.

“But the staff reported that after two hours, they were still unattended inside the hospital,  that’s why they went back to the camp and the first aid was given at the camp’s own makeshift clinic,” he said.

Dr. Lynn Redoble of the Father Pops Foundation, said the victims were later treated in their clinic.

The burnt makeshift shelter had at least five rooms. Each room is occupied by at least seven people. Loloy and his family were also sharing the room with two other families – the Domol and Kulot.

There were 14 individuals inside their room, 10 were children, including Loloy’s three kids.

Grace Avila, UCCP Haran Officer-in-Charge said that they estimate the damage to be at P600,000 to P1,000,000 including a motorcycle and other personal properties of the student boarders.

Avila said the male dormers were the first to notice the fire and they went outside to wake up the lady boarders at the separate cottage. She said the incident was “very traumatic” for them.

Avila said all of the boarders and staff of UCCP held a prayer gathering and debriefing. She said they are currently meeting with their pastors on the actions they will undertake after the incident. The dormitories houses at least 20 boarders most of whom are students.

Avila said she believes the burning of their compound is “organized” and “well-planned”.

She said they believe the incident is linked to the fact that Lumads are calling for the pullout of military troops from their communities.

“Lisud diay ning motabang tag tao kay ingon ani diay ang balos no? (Helping out your fellow men could be difficult because this is what you will get) We don’t have any intention to harm anybody. What we want is to provide the needs of the Lumads because they have nowhere to go,” said Avila.

The UCCP Haran compound houses more than 700 Lumads from the provinces of Bukidnon and Davao del Norte who sought refuge since March last year.

Karapatan Southern Mindanao secretary general Hanimay Suazo said the incident “was intentional as the lumad evacuees have been experiencing harassment from ALAMARA, 10th Infantry Division,Philippine Army-EastMinCom, Rep. Nancy Catamco, and other government agencies, who are forcing them to return to their respective communities.”

Dario Tumagsa, 37, from Kapalong, Davao del Norte told Davao Today that his younger brother, Dongko has already warned him early this year that the evacuation camp will be burned.

“Ah gituyo gyud to. Kay sa diri pami daan, naay nag anhi nga Alamara, ingon sila “dili mo mouli diri, sunogon gyud mo sa gasolina” (It was deliberate. Because even before, an Alamara member told us that if we do not return home, we will be burned),” said Tumagsa.

For his part, Task Force Davao Commanding Officer Col. Cristobal Zaragosa, TFD commander denied the accusations of progressive groups that the incident was done by the military.

(Why is it so easy for them to blame the government on what happened? Or perhaps they orchestrated it just to gain attention or gain sympathy so their donors will give more because Haran was burned?)

He added that “The Armed Forces will not go to that extent because these are people that we are protecting,” he said.

Brigadier General Ronnie Evangelista, deputy commander of Eastern Mindanao Command on the other hand said the AFP is open for investigation.

He was quick to dismiss the condemnation against the incident  as “propaganda.”  (With additional reports from Aimee Gito/davaotoday.com)