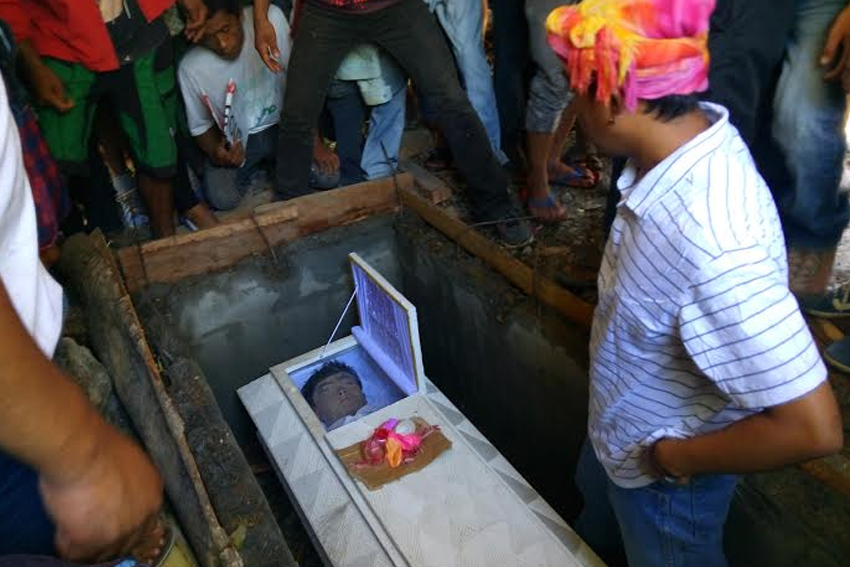 FAREWELL. Darwin Sulang’s coffin is opened on its way to the burial ground so his families and fellow farmers may have a last glance of him. Sulang was killed with a gunshot during the violent dispersal in Kidapawan protest on April 1. (Earl O. Condeza/davaotoday.com)

ARAKAN VALLEY, North Cotabato — Cries from the family, relatives, close friends, and support groups filled the atmosphere right before the body of Darwin Sulang was buried.

“We hope that justice will prevail for my brother,” said Sulang’s brother, Albert.

Sulang was slain on April 1 amid a violent dispersal of their farmers’ barricade which went up to four days at a national highway in Kidapawan City. He joined the 6,000 farmers from Cotabato province who demanded 15,000 sacks of rice from the provincial government.

“He went to Kidapawan because he wanted to help us to have food, for we no longer have food due to drought,” said the slain protester’s sibling.

Darwin’ mother bursted into tears as the mourners came and was not able to speak even when one of her son’s close friends, Gerard Ada spoke up and gave his testimony.

“He was a close friend of mine, he is really caring, not just to his family but also to us, his friends,” Ada said in tears.

Remembering what is Darwin to him, Ada leaned on the wall. With tears welling from his eyes, he said in anger:”I hope that justice will be given to Darwin, the police are inutile!”

Unable to continue further, Ada ended his testimony by thanking the support groups and mourners who came and join them in their call for justice.

Ebao Sulang, Darwin’s father, said that they will never forget his death. “Whatever happens we will never forget him,” he said, adding that losing his son will serve as a reminder of the grave crisis that pushed the farmers of Cotabato to protest and demand for rice.

Ebao also thanked those who came and mourn for the last time and paid the last respect for Darwin.

Meanwhile, Moro leader and Gabriela Women’s Party third nominee, Bai Ali Indayla, told mourners and Darwin’s family that despite the violent dispersal, there are still people who “are willing and committed to continue what Darwin fought for.”

Indayla was one of the support groups came in the second day of the barricade as farmers were threatened to be dispersed without their demands answered by the provincial government.

“Yes, Darwin is dead, but there more people are now awaken of the struggle (of the farmers), this proves that farmers are heroic,” Indayla said.

Indayla said that the number of mourners shows their commitment and will seek justice for Darwin.

The remains of the slain protester was buried in a vacant lot beside their house. (davaotoday.com)