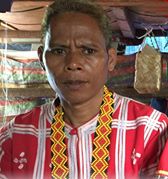 DAVAO CITY, Philippines – The family, friends, and militant indigenous people or Lumad groups mourned the sudden demise of one of its leaders, Datu Kaylo Bontulan who was killed during a military aerial bombardment in Kitaotao, Bukidnon, on Sunday, April 7.

Bontulan, 40, was a council member of Salugpungan Ta Tanu Igkanogon, the deputy secretary-general of PASAKA Lumad Confederation, and an officer of the national minority group Katribu. He left behind his wife Merna and four children.

His remains now lie in wake at the UCCP Haran Bishop’s Compound where some 700 dislocated Lumad have been staying.

“My husband has always been an active leader of the tribe, ready to defend us from soldiers who won’t stop harassing our communities,” Merna told Davao Today.

“We mourn the death of Kaylo who has sacrificed much for the defense of our ancestral lands and the Lumad schools in Talaingod,” said Jong Monzon, Pasaka secretary-general.

He also scoffed at the military’s pronouncement that Bontulan was killed in a gun battle, saying the latter was a civilian and a leader who was consulting with other Lumad communities in Bukidnon when he was hit by aerial bombs and ground troops last week.

The Eastern Mindanao Command in its press release showed a picture of Bontulan referring to him as a rebel who was killed during a 15-minute clash between the New People’s Army (NPA) and the 3rd Infantry Battalion at around 9:50 am at Sitio Ngaran, Barangay Kipilas, Kitaotao, Bukidnon last April 7.

Since his early twenties, Bontulan had already been active in the struggle of the Salugpungan against mining and logging incursions in Talaingod, Davao del Norte.

Five years ago, at the height of intensive military operations, hundreds were displaced including Bontulan’s family. They sought sanctuary from protestant church groups in Davao City who had since then provided their temporary shelter and food. The displacement and evacuation of thousands more Lumad had continued over the last few years.

Yearning for home, Bontulan and other leaders hoped to return to their ancestral communities but the military had already tagged them as rebels, forcing them to campaign for support in the city and in Manila.

Monzon said, “Datu Kaylo is a martyr for the Lumad. We call for justice and for the military operations in our community and ancestral lands to stop.”

He added that President Rodrigo Duterte has intensified its IP-focused counter-insurgency program Oplan Kapayapaan to drive away Lumad communities that oppose exploitative projects in their ancestral domain.

He said that the Pantaron Range, where areas including Talaingod and Bukidnon lie is threatened with mining and other ventures.

“Since President Duterte sat in power, we thought the situation for the Lumad would have become better, but instead, militarization in the countryside worsened,” Monzon said.

He said that after President Duterte placed Mindanao under the martial rule, human rights violations against Lumad such as killings, harassments, and closure of Lumad schools have worsened.

“Together with Datu Kaylo, we traveled from Mindanao and joined Manilakbayan to let the people know regarding the attacks against us,” Salugpungan council member Datu Tungig Mansimuy-at said.

Mansimuy-at lamented that they could not go back to their communities for as long as the military and paramilitary forces continue to rule in their areas.

Various groups and personalities grieved as they gathered during the wake of Datu Kaylo at the UCCP Haran. They reminisce several local and national occasions when they personally met and associated with the well-respected tribal leader.

Lumad women’s group Sabokahan gave its final salute to a comrade and courageous leader. The group said Datu Kaylo is a leader “who continued the fight of his elders for the defense of the Pantaron Mt. Range and his people.”

“Datu Kaylo Bontolan will be remembered throughout history for his contribution to the fight for social justice and genuine peace! A long line of lumad youth will take courage from your unjust yet courageous death!” the statement added.

University of the Philippines Mindanao professor and anthropologist Aya Ragragio shared her memories of “Datu Kai” whom she had also worked with during their field works.

Ragrario said, “I first met Dats Kai in 2013. It was the founding anniversary of Salugpongan. All the datus turned out, dressed in their festive best: tangkolo, suning, sundang, the works. But Kaylo only wore his “Manobo”-style jacket. He was younger than most of the datus. He was not yet of age during the Talaingod pangayaw in 1994. But as a teenager, he was a witness to the preparations and was given minor tasks such as ferrying food. That was Kaylo’s Pantaron: of brave men and women, young and old, working towards a victory that no single datu or figurehead could claim as individually his own.”

Aside from speaking on behalf of PASAKA, Datu Kaylo also served as an interpreter of his fellow Lumad leader in Talaingod, Bai Bibyaon Bigkay, especially during media interviews, conferences, and forums.

The Manobo leader had also left a striking impression to the award-winning journalist, Inday Espina-Varona.

(I know Datu Kaylo who came from Haran, during forums, on the number of Lumad Lakbayan to the National Capital Region.)

“I know him best as the interpreter of Bai Bibiyaon, who sometimes struggled to slow down the fierce Lumad leader when she was on a roll,” Varona added.

She would also observe Datu Kaylo ending up scratching his head with a sheepish smile because nobody can stop Bai Bibi when the spirit moved her.

Like the woman leader, Varona said Datu Kaylo was very lean. She went on to describe, “He wasn’t tall but his flashing eyes, high cheekbones, and strong jaw showed a spirit as fierce as the woman he respected.”

“Datu Kaylo was an eloquent speaker in his own right, pinpointing areas under fire and why they were being targeted. And he was a real leader, ensuring members of their communities kept dignity and pride intact even in the harshest of challenges. Hindi ka makakalimutan, Datu Kaylo,” Varona concluded.

Lopez expressed deep mourning upon hearing of Datu Kaylo’s death, saying that the leader was “with us since day one of the Bai Bibyaon Movie. He translated the Manobo language as well. Rest in peace, Datu. You will be missed.” (davaotoday.com)