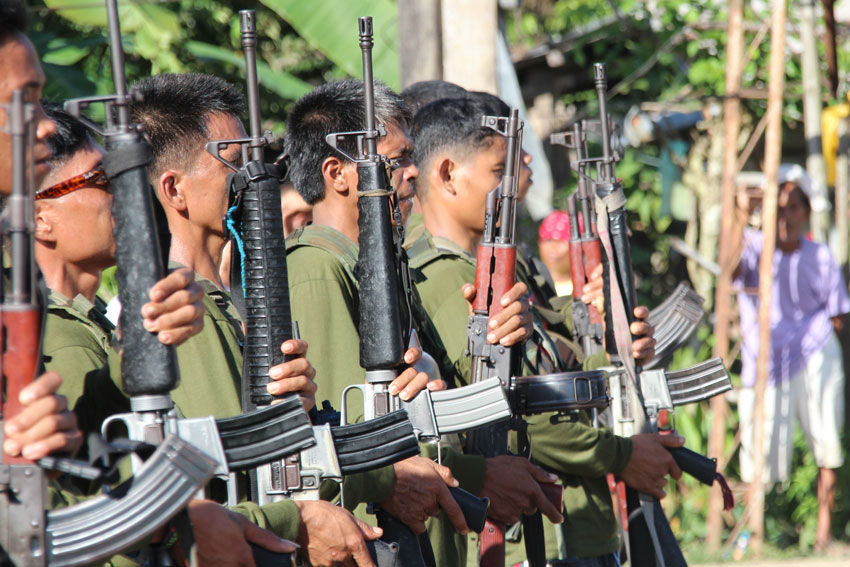 DAVAO CITY — The National Democratic Front of the Philippines in Southern Mindanao denied reports that the evacuation of Lumads in a village in Davao Oriental last week was brought about by the presence of the New People’s Army.

In a statement on Monday, the NDF said it condemns the “two-day sustained aerial bombardment and strafing” by the soldiers on July 8 and 9, 2016 in Barangay Pichon, Caraga town, Davao Oriental which displaced civilians.

Army information officer, Capt. Eliseo Marcolino of the 67th IB told Davao Today in an interview that the evacuees numbering to at least 399 families have already evacuated “since July 6 because of their fear of the NPA.”

The encounter happened at around 10:00 am in Sitio Lanipga, Barangay Pichon. The Army also launched an air strike against withdrawing NPA members dropping an estimate of “six rockets” to fleeing guerrilla fighters.

The Army said the NPAs arrived around June 22 in a village and after two days, an ultimatum was given for tribal chieftain Cupertino Banugan to surrender.

Banugan is the tribal chieftain of the Mandaya’s ancestral land covered by the Certificate of Ancestral Domain Title in Barangay Pichon. But the residents reported that Banugan has “abused” his authority asking them for royalty fees from the profits of their produce.

Lt. Miguel Diorda, of the 67th IB said the NPA has also sent them a letter they received on June 24 telling them to “surrender” Banugan.

“I-surrender daw namin. Eh yet kami yung protector ng IPs, hindi po kami papayag na merong may mangyaring masama sa mga kababayan nating IPs (They told us that we have to surrender him, but we are the protector of the IPs, we will not allow it that something bad will happen to the IPs),” said Diorda.

But Rubi del Mundo, spokesperson of the NDF in Southern Mindanao said the Army’s attack which “wounded several civilians, blew up houses, and destroyed the masses’ farms and livelihood,” has caused the displacement of hundreds of Mandayas who evacuated to Caraga town.

Two women were reportedly injured during the incident.

Del Mundo added that the evacuees hardly received any support from the local government.

Del Mundo said guerrilla fighters from the New People’s Army Compostela Valley – Davao East Coast Sub-Regional Command “were conducting a series of consultations with the Mandaya tribe in Sito Lanipga and nearby communities in Barangay Pichon since early June.”

He said that the Army “conducted intensified combat operations, hamlet several sitios and blockaded the food supply of the Lumads in the area.”

“After the two-day air strike, they looted the masses’ houses, farms and livestock,” he said.

Jaime Silat, a purok leader from Barangay Pichon, told a radio interview on Sunday, July 9 that it was on June 13 when the NPAs arrived in Sitio Kaliongan. “By then, most of the residents have started evacuating,” he said.

On July 8 the encounter happened at around 10:00 am said Silat. He said the encounter lasted until 11:20 in the morning, but the Army had flown its air support which dropped “13 rockets”.

There is no report yet of fatalities in the community or casualties from the Army or the NPAs.

Silat said the teachers also evacuated from the community because of fear. He said classes have not resumed since June 13.

Silat said they only want to go back to their communities.

“It’s difficult that we have to leave our farms, our livelihood, because of the incident,” he said.

Silat’s village in the Poblacion, he said, is not covered by the CADT area which Banugan heads.

The NDF said while they maintain their “serious commitment to the peace process,” the Army “should be held accountable for its fascism against Lumads, peasants and the Filipino people.”

The formal peace talks between the government and the NDF is scheduled on the third week of July. (davaotoday.com)