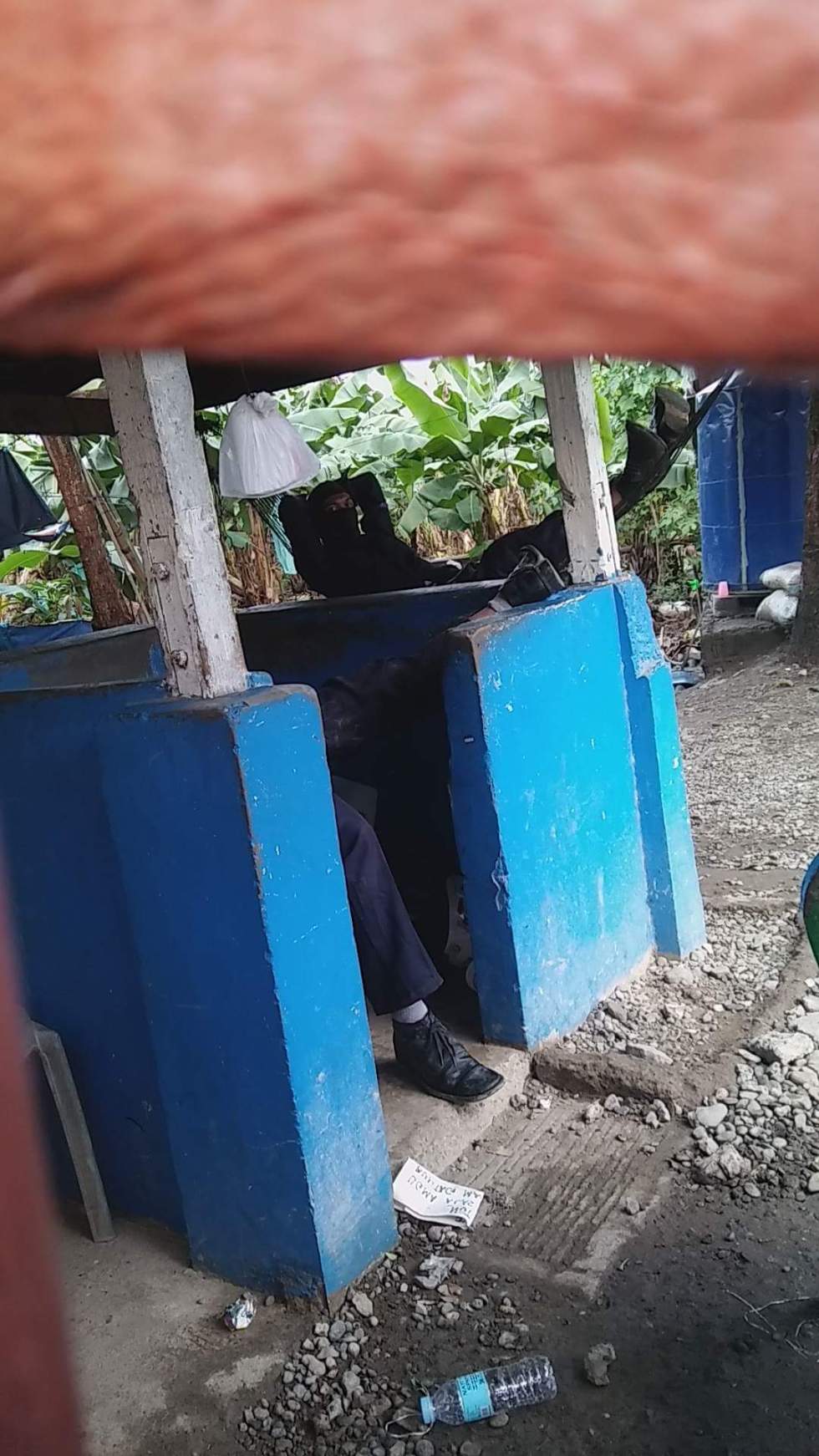 The outpost that was once manned by farmers who overtook the 145-contested area at the Hijo plantation in Barangay Madaum, Tagum City is now occupied by the security guards after evicting agrarian reform beneficiaries on Saturday, Dec. 31, 2016. (Photo by Radyo ni Juan Tagum)

DAVAO CITY, Philippines— The cease and desist order issued by the Department of Agrarian Reform recently did not prevent plantation guards of  Lapanday Food Corporations, Inc.  from evicting farmers occupying the contested San Isidro farm area inside the Hijo plantation in Barangay Madaum in Tagum City on New Year’s eve.

According to Mely Yu, president of Madaum Agrarian Reform Beneficiaries, Inc., more than a hundred security guards of Lapanday Food Corporation stormed their office on Sunday around 3 a.m.

“I thought they are just some outsiders being shooed away by our members,” Yu told DavaoToday in a phone interview. “It was already silent when we realized we (Yu and her husband) were the only ones left.”

Yu, together with her husband, were commanded to proceed at the plantation gate as LFC guards were armed with long, high powered guns. She added that a score of Marbai members were forcibly tied while being escorted out of the compound.

Upon reaching the gate, they learned that some Marbai members were already outside the gate.  The gate is about a kilometer away from their office.

She said that personal belongings like, money, cellphones, motorcycles, and cooperative documents were left inside their office.

When they plead to get their things, the LFC security guards assured them that their personal belongings will be safe.

Yu said that police arrived at the scene but failed to pacify the situation saying they could not meddle in the situation because they are in a “private property,” an issue which has been resolved during the dialogue held last Dec. 19.

The Marbai leader said they already filed a blotter report before the Tagum police.

Marbai has 228 members and claims the 145-hectare area which are part of the area managed by Lapanday under its compromise agreement with the Hijo Employees Agrarian Reform Beneficiaries Cooperative-1.

Last December 20, the Department of Agrarian Reform implemented the cease and desist order which said the Marbai is the rightful owner of the contested San Isidro farm area.

DAR Undersecretary for Legal Affairs Luis Pangulayan said the compromise agreement between the Hearbco-1 and Lapanday was made in court, which he said “has no jurisdiction” in implementing agrarian reform in the country.

The order which was released last Dec. 14, prohibited Lapanday “from forcibly evicting the members of petitioner Marbai from the subject landholding and from disturbing their peaceful possession and occupation of the subject property.”

Read: DAR avers farmers get to own disputed land

DAR also ordered the Sheriff of the DAR Regional Office 11 to supervise the harvest of the banana products in the area “until such time that this case is finally decided on the merits.”

LFC’s legal counsel Atty. Leilanie Espejo said they will contest the said order in the proper court and will pursue legal remedies. (davaotoday.com)