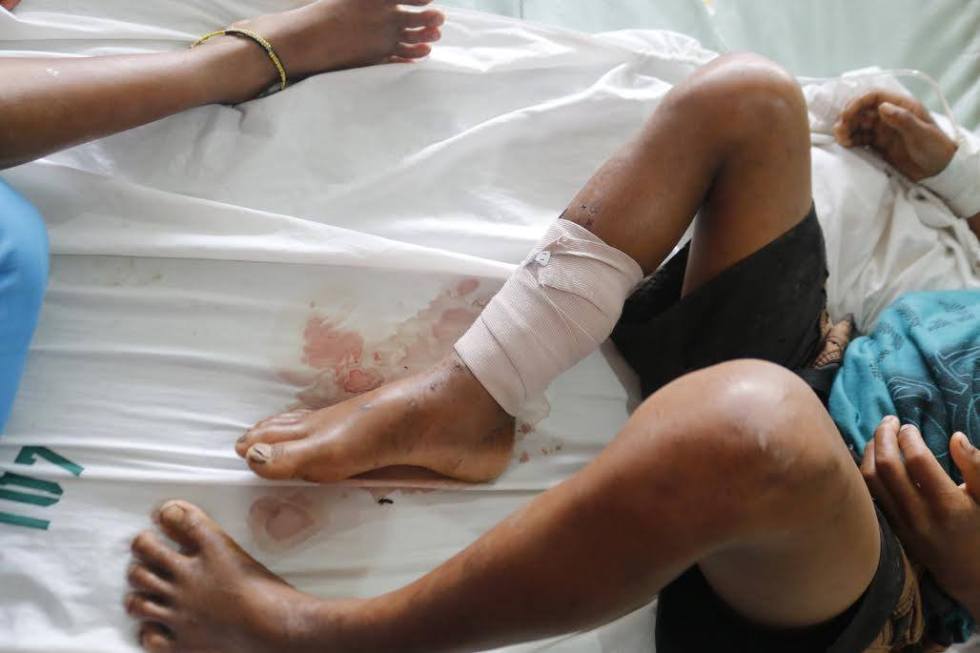 DAVAO CITY — A pregnant Lumad woman died while seven other individuals, five of whom are minors, were wounded after an alleged member of a paramilitary group indiscriminately fired at a crowd gathered for a wedding Saturday morning.

In a Facebook ‎post Sunday morning, the Higala sa Lumad Network (Friends of the Lumad) identified the woman as a certain Makinit Gayoran.

The victims ‎and other more or less 80 individuals were gathered in a wedding ceremony in Sitio Tibugawan, Barangay Kawayan, San Fernando, Bukidnon on Saturday morning, July 30 when the suspect rained bullets on them.

Gayoran was hit in the chest while ‎two kids, one is 8 years old and another, 7, were injured. Three other teens were also wounded. ‎Gayoran was was also carrying her months-old firstborn ‎when she was hit.

Sr. Ma. Famita Somogod, coordinator of the Rural Missionaries of the Philippines in Northern Mindanao Region identified the suspect as Butsoy Salusad.

“One pregnant woman and five children were wounded yesterday simply because an animal in camouflage and combat boots decided to have a shooting spree in their community. The animal has for a long time been known to have the name ‘Alde Salusad’ or ‘Butsoy’,” Somogod said.

“They also brought with them two residents from Sitio Spring and Sitio Tibugawan tied up with a rope, forced to guide the group,” a portion of the report of the group said.

Barangay Kawayan Indigenous Peoples Mandatory Representative Arnold Manhura reportedly met Salusad along the road in Sitio Spring, near the place of incident on the day of the incident.

“Datu Arnold said that he had pleaded with Butsoy not to go to Sitio Tibugawan as the appearance of fully armed men might disturb the wedding festivities. Salusad went on and in just a few minutes indiscriminately fired at the community,” it added.

Somogod said “Butsoy Salusad has branded all communities against him as supporters or members of the New People’s Army. He, being a high-ranking official of the NPA a long time ago, seems to have credibility in the eyes of government officials. And so he is able to lead everyone on, playing on the government’s interest to actually forward his own.”

“Salusad has gotten it to his head that he could simply take any life that doesn’t suit his grand plans. As if he were god. And the government has given him all the reason to think so,” said Somogod.

The community has been receiving threats from Salusad who has accused the tribal leader, Datu Jimboy Mandagit, as a member of the New People’s Army. Salusad wanted Mandagit to surrender or “he would kill them all.”

Joms Salvador, spokesperson of Gabriela, condemned the incident which they said is “proof that the Armed Forces of the Philippines and its paramilitary cohorts do not intend to respect the unilateral ceasefire declared by its own Commander-in-Chief.”

Salvador said “with or without ceasefire, the military and paramilitary troops in the countryside can and will do what it pleases.”

“The New People’s Army guerrillas can defend themselves when attacked but unarmed civilians are always at the losing end because they cannot defend themselves,” she said, adding that a ceasefire must benefit civilians.

She also said that the termination of the ceasefire agreement by the President is “worrisome”.

Salvador added that they hope the lifting of the ceasefire would not undermine Duterte’s commitment to resume formal talks with the National Democratic Front of the Philippines.

The formal talks are scheduled on August 20-27. (davaotoday.com)