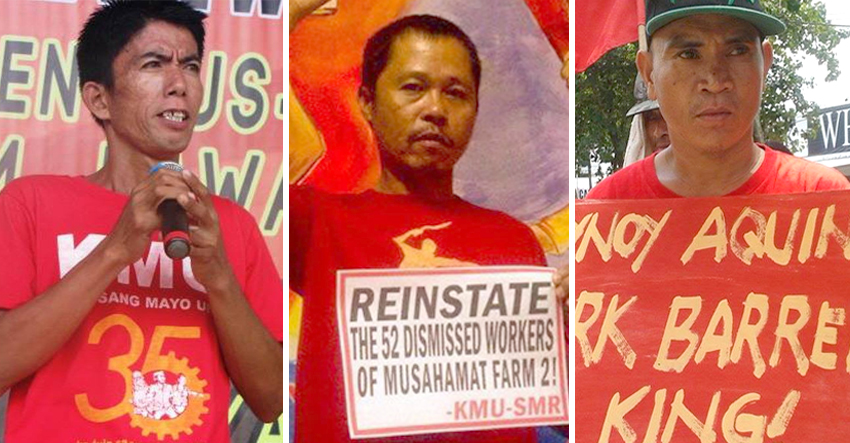 Both Cabaltera and Genabe were brought to the 10th Infantry Division camp in Mawab, ComVal, KMU said in a statement.

Prior to the incident, the two union leaders went to the police station in the area and filed a complaint about alleged military harassment.

Both leaders told the police that unidentified armed men forcibly entered their house a day before the incident.

They claimed that they were forced to surrender as supporters of the New People’s Army (NPA) to clear their names from an alleged “military list.”

KMU also reported that Rosales was abducted from his house and brought to the 71st Infantry Battalion of the Philippine Army camp in Barangay Lahi, Pantukan.

In 2016, banana plantation workers under MWLU were already complaining over the military’s vilification campaign linking their union to the NPA.

However, Major Ezra Balagtey, spokesperson of Eastern Mindanao Command of the Armed Forces of the Philippines (AFP) belied the alleged abduction of the three leaders of Musahamat labor union.

Balagtey said that the three “voluntarily reported to their headquarters.”

The 71st IB has yet to issue a statement regarding the incident.

Carlo Olalo, KMU-SMR secretary-general slammed the abduction of the three union leaders, saying that the incident is “a product of the continuing imposition of martial law in Mindanao and the result of Duterte’s fascist dictatorship.”

“The union works and leadership of the three in the fight for better wages and working conditions especially in the plantations are valid exercises of their constitutional rights as citizens of this country and are in no way connected to the New People’s Army (NPA),” Olalo pointed out.

He added that the three labor leaders should be lauded as community leaders, and not branded as terrorists. (davaotoday.com)