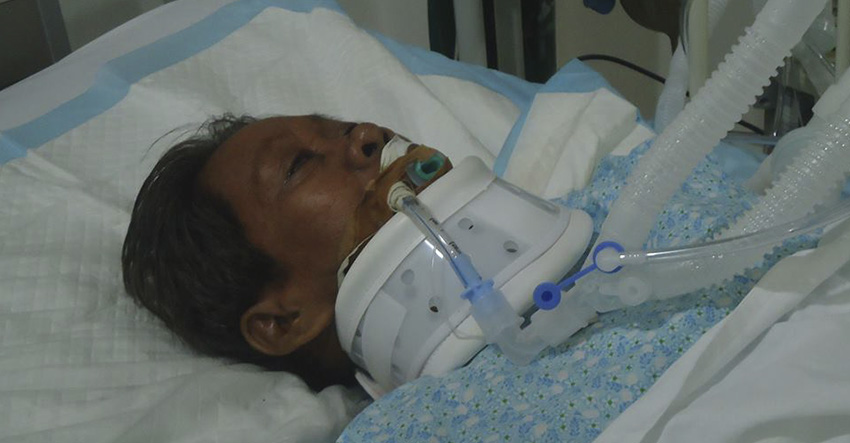 MINING ACTIVIST. Teresita Navacilla, 60, died early morning Saturday at a hospital in Tagum City. She was attacked in Pantukan, Compostela Valley on Wednesday evening. Navacilla is a known anti-mining advocate in their community. (Contributed photo)

DAVAO CITY (Updated 2-01-16 7:22pm) – Three days after she was shot by a still unidentified assailant, a 60-year old activist in Compostela Valley died early morning Saturday bringing the number of victims of extrajudicial killings in the region to four in just a month.

Human rights group Karapatan in Southern Mindanao reported on Friday that Teresita Navacilla, a resident of Barangay Kingking, Pantukan town in Compostela Valley was shot by a gunman at around 8:30 pm on January 27.

Police reports said Navacilla was attacked by two unidentified armed men on board a Honda XRM motorcycle. One of the suspects fired at the victim.

On Saturday, Karapatan said in a text message that Navacilla has died.

Navacilla was reportedly tending her store when she was attacked. Karapatan said the two bullets “grazed Navacilla, but flew past the back of her head and her nape.”

Hanimay Suazo, secretary general of Karapatan said the attack was an attempt to silence Navacilla for her opposition against the entry of Nationwide Development Corporation (Nadecor) and St. Augustine Gold and Copper Limited.

“She is the 54th victim of extrajudicial killings in Southern Mindanao since 2010 and the fourth victim here in just one month,” said Suazo.

Navacilla was a small scale miner and the purok chairman of  Purok Bardown, Sitio Gumayan in Barangay Kingking, Pantukan.

Suazo said Navacilla was one of the convenors of Save Pantukan Movement, a network opposed to large-scale mining.

Suazo claimed that the attackers “could have come from the 46th IB, who have been on a rampage in Pantukan lately, arresting innocent civilians and portraying them as members of the New People’s Army, and assaulting human rights of progressive leaders in the area as well.”

“They are targeting small scale miners, farmers and lumads of Mansaka tribe who are opposing the entry and full operation of Nadecor and St. Augustine Mining Companies,” she said.

The attack against Navacilla came after a series of incidents also involving leaders of anti-mining organizations in the province.

Tindasan and his organization are also opposing the entry of the Agusan Petroleum Mining Company in the area. The company is a subsidiary of San Miguel Corporation, which is owned by President Benigno Aquino III’s uncle and businessman Eduardo Cojuangco.

On January 11, the CFA filed their complaints against harassment by alleged Army members before the  Commission on Human Rights Region XI.

Early this year, Renante Mantos, leader of Hugpong sa Mag-uuma sa Walog Compostela (Farmers solidarity in Walog, Compostela or HUMAWAC) was filed with “trumped-up charges” of serious illegal detention of his own neighbors.

The Human Rights Watch has recently released its report stating the Aquino administration’s slow response to the spate of killings of journalists, activists, indigenous leaders, among others.

“Since his election, President Aquino held out the promise of a rights-respecting Philippines for which he has sadly been unable to deliver. While the number of serious violations has declined during Aquino’s administration, ongoing killings of prominent activists and the lack of successful prosecutions mean there’s nothing to prevent an upsurge of abuses in the future,” said Phelim Kine, deputy Asia director.

According to its website, Nadecor is the sole claim owner of the 1,656-hectare mineral rights of Kingking property covering four villages in Pantukan including Barangays Kingking, Magnaga, Tagdangua and Araibo.

Nadecor was incorporated on September 6, 1956 and is registered with the Securities and Exchange Commission. Nadecor is “primarily engaged in the discovery, exploration and development of copper and gold mineral resources.” However, in March last year Nadecor has clarified that it is not a partner with the St. Augustine Gold and Copper Ltd for the King-king Gold and Copper Project.

The Nadecor’s Board of Directors rescinded its Memorandum of Understanding dated April 27, 2010 with SAGCL, St. Augustine Mining Ltd. And St. Augustine Services Corporation on March 26, 2012. (davaotoday.com)