Activists to gov’t: we are not NPA supporters 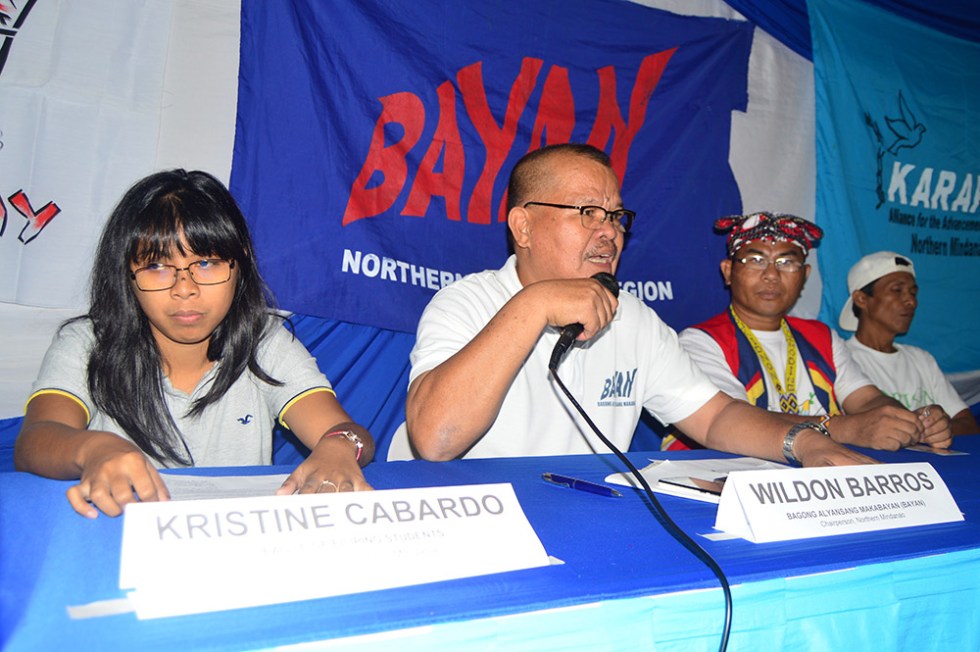 Progressive groups in Northern Mindanao in a press conference in Cagayan de Oro City on Tuesday, November 28 maintain that they are operating within the bounds of the law and lambasted the Duterte government for threatening activists. (Jigger J. Jerusalem/davaotoday.com)

CAGAYAN DE ORO CITY, Philippines– Progressive groups have dared authorities to substantiate the accusation that they are supporters of the Communist Party of the Philippines (CPP) and its armed component, the New People’s Army (NPA) as President Rodrigo Duterte recently threatened to arrest members of the so-called “legal fronts” of the communists.

“The police have to prove that we are NPA supporters. The burden of proof is on them,” said Wildon Barros, regional chairperson of the Bagong Alyansang Makabayan (Bayan) in Northern Mindanao, in a press briefing on Tuesday, Nov. 28.

Barros’ statement was in reaction to the President’s threat and the regional police office’s pronouncement that they are ready to arrest and file charges against militant groups in Northern Mindanao.

But Barros said they are not afraid since they have “legal personalities,” and, in fact, Bayan and its affiliates are registered with various government agencies.

Bayan, for one, is registered with the Securities and Exchange Commission (SEC). Other member-organizations are registered with SEC, Cooperative Development Authority, Department of Agriculture, among others.

He said they are ready to defend themselves in court if wrongfully arrested by law enforcers. “We believe in due process, the courts.”

To prove that he is not a member of the armed guerrilla group, Barros said he was able to obtain police and National Bureau of Investigation (NBI) clearances.

“These clearances signify that I have no criminal record,” he said, adding that Bayan and its affiliates actually recognize the rule of law.

“If we have indeed committed a crime, legal procedures should be observed,” Barros said.

“We operate in broad daylight, we use our real names. We don’t hide behind aliases. That goes to prove that we are not members of the NPA,” said Kristine Cabardo, chair of the League of Filipino Students (LFS).

“We send statements to the media, answer interviews, organize rallies of basic sectors of society. There’s nothing illegal about making our voices heard and calling for free education,” she said.

“If we are called NPA because we are fighting for the promotion of human rights, then so be it,” Cabardo added.

Datu Jomorito Goaynon, regional chair of the indigenous peoples collective Kalumbay, said they are a legitimate organization and they even abhor violence.

“Are we terrorists because we dream of bright future for our children?” Goaynon added.

Barros said they remain undeterred by Duterte’s threats as Bayan and its affiliates are set to stage a protest action on Dec. 10 in time for the observance of the Human Rights Day. (davaotoday.com)