Agcaoili: events out to sabotage talks 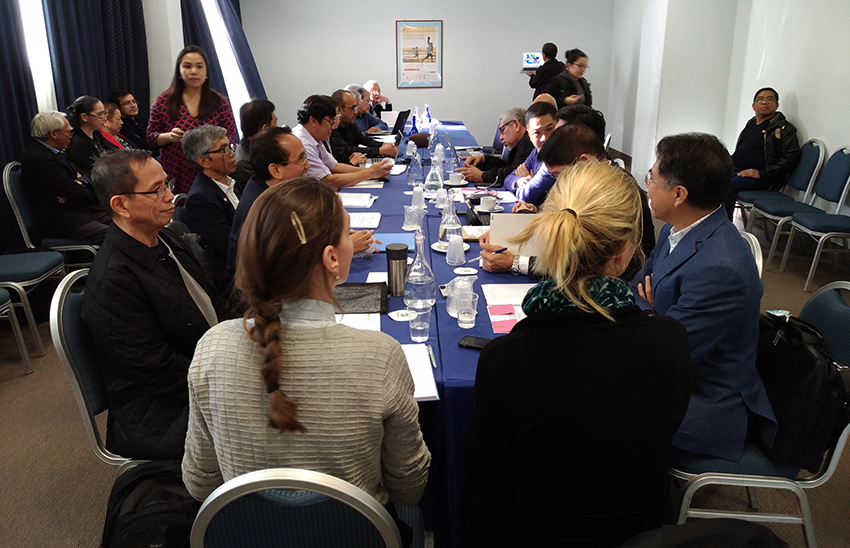 Peace panels from the National Democratic Front of the Philippines and the Philippine government in Rome, Italy. (Zea Io Ming C. Capistrano/davaotoday.com)

ROME, Italy — National Democratic Front of the Philippines peace panel chair Fidel Agcaoili called the military operations in Southern Philippines and the killings of two activists last week as efforts out to sabotage the peace negotiations.

Agcaoili also said the incident in Makilala town North Cotabato is a “breach” of the unilateral ceasefire of the government.

“They acknowledged, si Gen. Rey Guerrero of the Eastmincom said its a military operation against a so-called lawless armed group,” he said in a press conference Monday.

An NPA guerrilla fighter was killed in the encounter while the Army denied the reports by the NPA that eight soldiers were killed during the first encounter.

Agcaoili added that the attack on Saturday happened just a day after the killing of two activists in Negros and Surigao del Sur.

The incidents are now adding to the already untenable communities where the Red fighters are maneuvering to avoid clash with government troops, he said.

“It’s a ground for speculation pero parang merong nananabotahe while the peace talks are ongoing in Rome,” Agcaoili said.

The NDFP leader described the events as “deliberate, systematic sabotage of the peace talks.”

“I’m saying it appears and it gives more ground for our forces that has been demanding to stop the unilateral ceasefire,” he added.

Agcaoili said the events reminded him of the series of killings of activists in 2005 to 2006 where current Army officials including National Security Adviser Secretary Hermogenes Esperon and AFP Chief of Staff Eduardo Año were implicated by the NDFP.

Agcaoili said with the current situation on the ground and the non-release of prisoners, they cannot prevent the leadership of the Communist Party of the Philippines and the National Operations Command of the NPA to withdraw its unilateral ceasefire declaration.

For his part, Atty. Rene Sarmiento, a member of the government peace panel said, the incident should be addressed with the Joint Monitoring Committee. The two parties recently signed the supplemental guidelines of the JMC on Saturday where both Parties may conduct joint investigation on cases of human rights violations. (davaotoday.com)