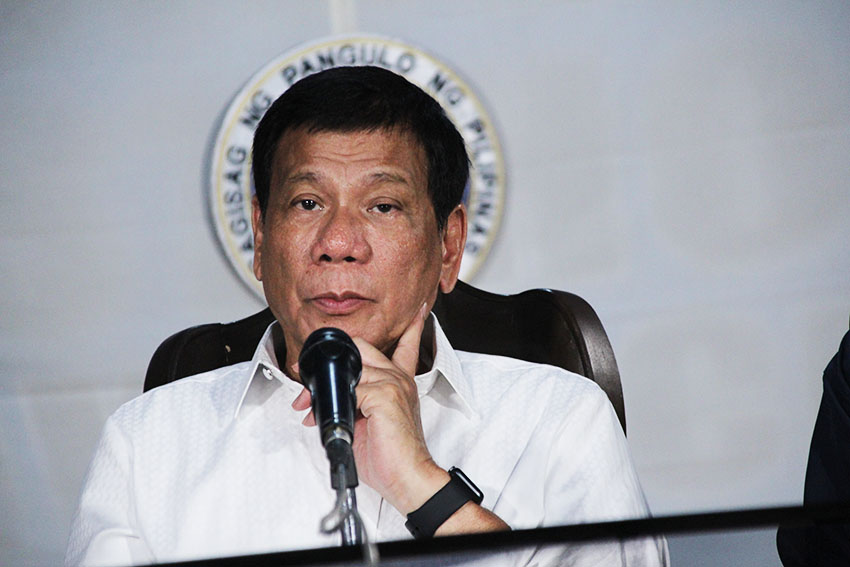 DAVAO CITY, Philippines – President Rodrigo Duterte likened the peace process to playing a poker game with the release of the prisoners as his “last card”.

“They are asking for 130 detainees to be released, all NPAs (New People’s Army), sorry. I cannot do that. I cannot do it, because uubusin nila ang baraha ko,” Duterte told reporters during an interview at the ground breaking ceremony of the new Bicol International Airport terminal in Albay Thursday afternoon.

Duterte reiterated his position that he wants to see a signed document of a bilateral ceasefire agreement before he will release the prisoners.

He said he has yet to see a “substantive progress of the talks.”

Karapatan Alliance for Human Rights said there are 400 political prisoners in the country, 130 of which are ailing prisoners.

Duterte said he “had conceded to the Communist Party of the Philippines, too much, too soon.”

But Karapatan Secretary General Cristina Palabay said Duterte’s statement proves that the political prisoners are held as “hostages” by the government.

“Are we waiting for them to die in jail? Instead of freeing them?” she said.

“Does it essentially mean that they are not fulfilling earlier commitments in the formal peace talks? Or reaffirming their adherence to the CARHRIHL (Comprehensive Agreement on the Respect for Human Rights and International Humanitarian Law)?” Palabay said.

“How can the peace process move forward if they can’t act on the commitments that were already issued?” she said.

On August 26, the “Joint Statement on the Resumption of the Formal Peace Talks in the Peace Negotiations” was signed by both panels to state their agreement on six points: reaffirmation of previously signed agreements, reconstitution of the Joint Agreement on Safety and Immunity Guarantees (JASIG) list, acceleration of the peace negotiations, releases of political prisoners, amnesty proclamation and ceasefire.

It was agreed by the parties that the government panel would recommend to President Rodrigo Duterte the issuance of an Amnesty Proclamation, subject to the concurrence of the Philippine Congress, to order the release of all political prisoners  who are listed by the NDF and who have been “arrested, imprisoned, charged, and/or convicted for the alleged acts or omissions within the ambit of the Revised Penal Code or special laws in connection with crimes in pursuit of one’s political beliefs.”

Both the government and the Communist Party of the Philippines have declared a separate unilateral ceasefire.

In August, Duterte also said that he is ready to release more political prisoners once he sees that the peace negotiations have succeeded.

“I am ready if the successful talks are there for me to see and to hear,” Duterte said in a press conference here on August 24.

But for the National Democratic Front, the success of the peace talks for the government is the signing of a bilateral peace agreement.

“From the start that is the most significant objective of the government, to stop the fighting in whatever way,” said NDF consultant Benito Tiamzon during a peace forum  at the University of the Immaculate Conception here on Saturday afternoon, Dec. 3.

He said the fighting may stop temporarily by a bilateral ceasefire agreement.

“However, without addressing the root cause of the armed struggle, fighting may again erupt and this time  it may be wider and intense,” Tiamzon said.

Read: Not yet time for bilateral ceasefire, ‘address roots of armed conflict first’

Palabay said it is important for both parties to address the issue of the releases of political prisoners as this can affect the peace talks that is scheduled to resume for the third round by January next year.

“I think that’s a consideration that both parties in the peace process should definitely talk about because you cannot do one thing and say the other,” she said.

She added that the government should not treat the political prisoners as pawns.

“This is not gambling, the political prisoners are not pawns. They deserve justice and the only partial justice they can get from the government is their freedom,” she said. (davaotoday.com)