Duterte tells students: You have to go back to ROTC 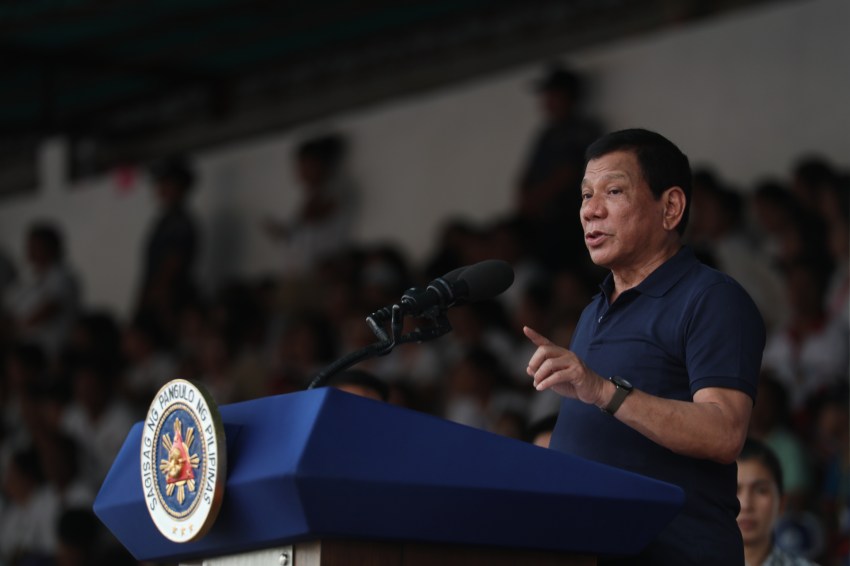 President Rodrigo Roa Duterte announces he is working on a law that will revive the Reserve Officers Training Corps during the opening ceremony of the Palarong Pambansa 2017 at the Binirayan Sports Complex in Antique on April 23, 2017. (Toto Lozano/Presidential Photo)

DAVAO CITY, Philippines — Philippine President Rodrigo Duterte said Sunday that he is now working on a law that would restore the Reserve Officers’ Training Corps.

Duterte made the announcement during the opening ceremony of the 2017 Palarong Pambansa at the Binirayan Sports Complex in San Jose de Buenavista, Antique province.

“You have to go back to ROTC,” Duterte told the young student athletes from elementary and secondary levels of the country’s 18 regions.

Duterte stressed that the ROTC will be able to assist civilians on how to fight in the future when there is “violence, anarchy.”

“Kasi ‘yung ROTC ‘yon ‘yung may training, reserve officers nga eh. Because if there is really violence, anarchy, ang maka-alam niyan, ang marunong mag-handle ng M16, M14 or mortar, ‘yung mga ROTC. Iyon ‘yang silang mag-guide sa mga civilian na walang alam (The ROTC gets training, that’s why they’re called reserve officers. Because if there is really violence, anarchy, those who knows to handle M16, M14 or mortar, are those who are ROTC. They will guide the civilians who don’t know anything,” Duterte said.

The president also said he believes the scrapping of the ROTC was a “very shortsighted” decision.

“There was this hazing incident in UST that resulted in the death of about one of two. Tapos I think it was Congress scraped entirely the ROTC. Diyos ko po, that was really a very shortsighted… We could have just investigated and place to — put to prison,” Duterte said.

Under Republic Act 9163, ROTC is currently offered as an optional program under the National Service Training Program.

The implementation of mandatory ROTC was stopped in 2001 after Mark Wilson Chua, a student and ROTC member from the University of Santo Tomas was found dead. Chua exposed the alleged corruption of ROTC in the school.

Duterte said once the mandatory ROTC is revived he can be assured that the next generation will be able to defend the country.

“You always ask America for help? They will not die for you,” Duterte added.

He also told the students to be ready to sacrifice and die for the country.

Meanwhile, Anakbayan vowed to oppose the revival of the mandatory ROTC which it described as “outrightly fascist.”

He said it is a “training ground for fascist repression and corruption.”

“ROTC is also a wellspring of corrupt practices such as the selling of uniforms and other requirements at marked-up prices and soliciting of bribes from those wishing to avoid the course,” he said.

“President Duterte, you claim to be a socialist. But ROTC is outrightly fascist, and just adds another layer of oppression on the youth and people. If you are truly for the oppressed, we challenge you to stop listening to the generals and rightwing nuts in your midst,” said Crisostomo.

He said instead of reviving mandatory ROTC, they call for the upgrading of the NSTP to “better instill among the Filipino youth a better sense of service to marginalized communities and the nation.”(davaotoday.com)