Families of NPA-captive police officials appeal for their release 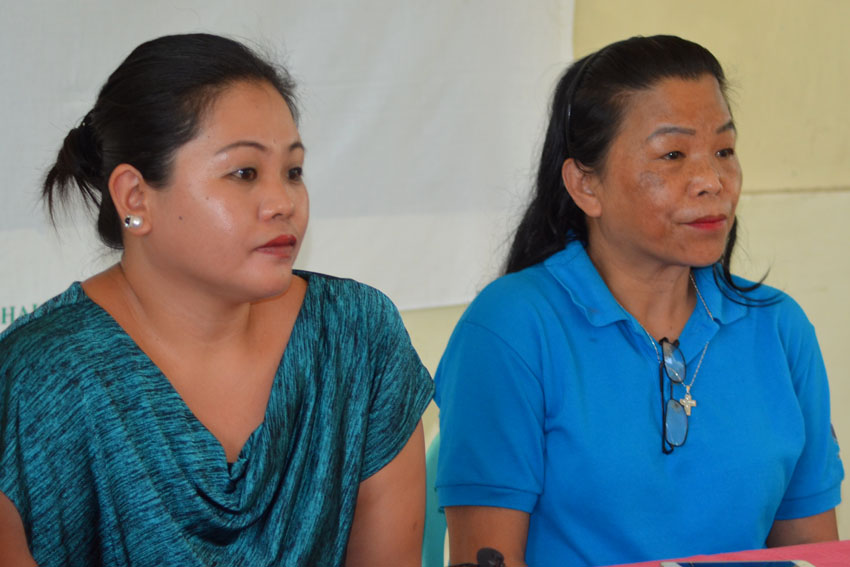 Charlene Ongachen (left), wife of Police Chief Inspector Arnold Ongachen, and her mother-in-law Agustina, answers the questions from reporters during a press conference on Thursday, August 29, 2016 at the United Church of Christ in the Philippines Haran compound in Davao City. They appealed to the New People’s Army to release the police official who was taken as prisoner-of-war on May 29, 2016 in a raid in Governor Generoso Municipal Police Station in Davao Oriental province. (Zea Io Ming C. Capistrano/davaotoday.com)

DAVAO CITY— The relatives of two police officials captured by the New People’s Army as its prisoners-of-war are hopeful that with the resumption of the formal talks between the government and the National Democratic Front of the Philippines they will be released soon.

In a press conference at the United Church of Christ in the Philippines Haran compound here Thursday, August 18, Agustina Ongachen, mother of Police Chief Inspector Arnold Ongachen said they are hopeful that with the resumption of the peace negotiations, his son will be released by the NPAs.

She said their family is also hopeful that the police official will be cleared in the investigations by the NPA because the issue of drugs accused against him is not true.

“We are very hopeful that he will be released. And I also thank his captors for not hurting him,” said Mrs. Ongachen.

She also said that they hope peace will be given a chance under the administration of President Rodrigo Duterte.

“I hope that he will be released soon so his wife and children can be with him,” she said.  PCI Ongachen has two children.

The police official was taken by the NPA in a raid at the Governor Generoso municipal police station in Davao Oriental province on May 29.

Four days after the raid, the NPA released a statement saying that the raid was meant to “punish the protectors of drug trafficking in the area.”

It also claimed  that it found a sachet of shabu in the possession of the police chief during the raid.

PCI Ongachen’s wife, Charlene, 34, was also present during the press conference. She appealed to the NPAs to release her husband soon.

“Nagsusumamo po ako na sana po i-release na ang aking asawa para makasama na po namin siya (I appeal to them to release my husband so we can be together),” said Charlene.

Charlene also said that if her husband is involved in drugs, they would have been better off now.

“Kung involved po sya a drugs sana maginhawa na ang buhay namin ngayon. Tag-hirap po kami  (If he is involved in drugs, we would have a better life now but we are poor),” she said.

Meanwhile, Jenelyn Grande, wife of Police Officer 1 Michael Grande said that while her neighbors assure her that her husband will be safe, she still worries for him.

Jenelyn hails from Banaybanay town in Davao Oriental.  She said their neighbors are telling her not to worry  because her husband will not be hurt.

“Kampante lang pud mi kay ana sila nga wala man na pasagdi, dili man hilabtan (We are calm because they told me that he will not be hurt),” said Jenelyn.

They have three children, one who is in Grade 1, the second was 3 years old and their youngest, 1 year old.

She said what she worries most is for their children who are still young.

She said her husband was captured on June 19 by the NPAs near the boundary of Lupon and Banaybanay towns in Davao Oriental. She said that she has received a text message from someone who identified himself as a member of the NPA and told her not to worry about her husband. She said that she was also told that a video of her husband will be released to assure her that he is safe.

But the video did not came until Thursday night. In a statement released on August 18, more than a month after the police officer was captured, the NPA said PO1 Grande of the Banaybanay Municipal Police Station was taken as a prisoner of war due to alleged reports that “he regularly received payoffs from illegal gambling in the area.”

Jenelyn said that for several weeks now their children who does not know the truth about their father’s situation, kept asking her when will he come home.

Both families are also calling on the government troops to suspend military and police operations when the schedule for the release of the two police officials is set.

UCCP pastor Rev. Jurie Jaime, convener of the Exodus for Justice and Peace, said they are optimistic that with the resumption of peace talks, the root cause the armed conflict will be addressed.

The government and the NDF  will resume their formal talks in Oslo, Norway on Monday, August 22.(davaotoday.com)