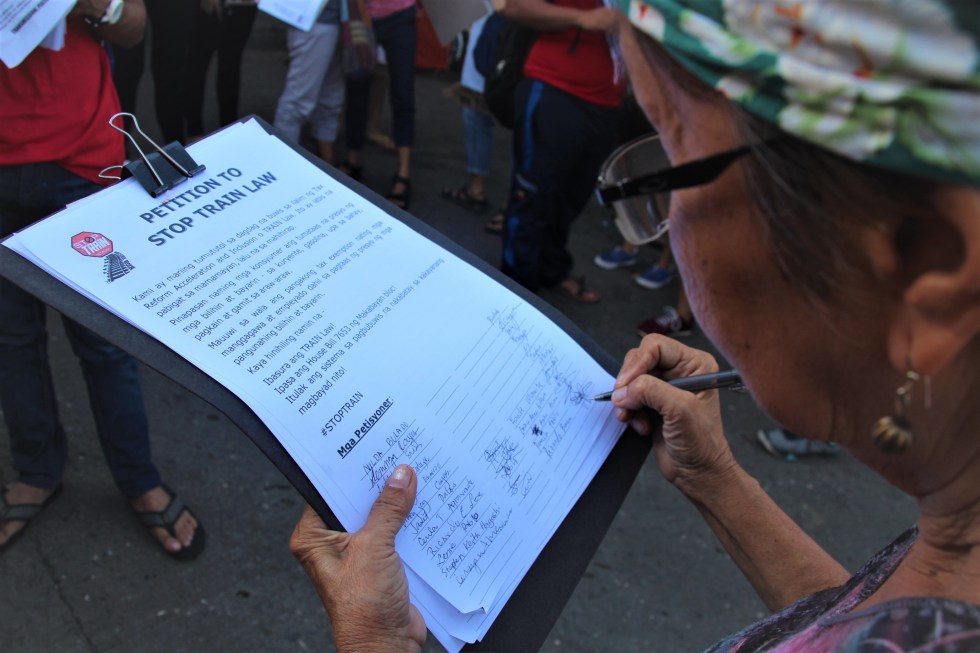 Members of Bagong Alyansang Makabayan ask market goers to sign a petition to stop the implementation of Duterte administrations’s Tax Reform for Acceleration and Inclusion (TRAIN) Law on Tuesday, June 12, 2018, at the Bankerohan Public Market in Davao City.(Kath M. Cortez/davaotoday.com)

DAVAO CITY, Philippines — Progressive groups ​mounted a petition-signing around the oldest ​public market here to ask the government to scrap its Tax Reform for Acceleration and Inclusion (TRAIN) Law​, which they described as anti-people.

The petition signing was held as they commemorate​d​ the 120th Independence Day ​here.​.

The group said President Rodrigo Duterte ​failed on his ​promise to have an independent foreign policy ​and that “just like Emilio Aguinaldo who betrayed the Filipino people,”

​In the case of the Train Law, he said it was among the policies ​”adding to the betrayal to its people​ that has worsen​ed​ the current situation of the people living in the poorest condition”​.​

Since January ​this year, the Kilusang Mayo Uno (KMU-SMR)​ said​ the price of petroleum product ha​s increased by P15​ ​in ​a span of only three consecutive weeks.

​The ​rice per kilo has ​also ​reached P45-​P​50​ ​from its original price of P43.00. There ​were​ also increase​s​ ​in prices of ​can​ned​ goods while ​the increase in prices of liquified petroleum gas went as much as P3.40 per kilogram.

Carlo Olalo, KMU-SMR spokesperson noted that after the TRAIN LAW was implemented ​”​the public suffered a much higher cost of daily needs​”​.

“Prices of food and other basic goods have increased more than four percent on average in the first quarter of the year.”

The group​s​ plann​ed​ to gather at least 10,000 signatures before ​Pres. Duterte would deliver his 3rd State of the Nation Address (SONA).

Anakpawis Party-list Rep. Ariel Casilao, a Davaoeno ​has appealed to the House leadership to prioritize the passage of a measure which repeals TRAIN LAW. The lawmaker filed House Bill 7653 that proposes to strike out the new add-on taxes on prices on basic products, including oil and sweetened products.

“Oil price hike which is the nth of this year had already jacked up the prices of fuel products to unprecedented heights. Since the implementation of the TRAIN Law, oil companies and the government are having a blast in increasing the prices,” Casilao said.

Among the provisions in the new bill ​we​re as follows: